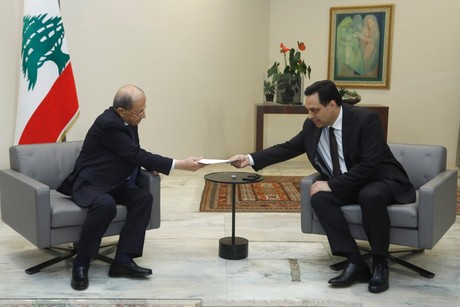 Lebanese President Michel Aoun accepted the resignation of the prime minister’s government on Monday following last week’s devastating explosion in Beirut port and asked it to stay on in a caretaker capacity until a new cabinet is formed, a televised announcement said.

Speaking to reporters after handing in his resignation to Aoun , Diab said: “May God protect Lebanon. This is what I can say.”

Lebanese Forces leader Samir Geagea on Monday called the government’s resignation “useless” because “those who formed this government will form the next government and consequently we will remain where we are .”

He announced that the country is “hours away from a major stance.”

“Our objective is to resolve the core of the problem, which is in the parliament,” the LF leader added, calling for “early parliamentary elections”

Geagea made his re marks following a meeting with a delegation from the Progressive Socialist Party.

On Sunday, he said his party was trying to secure enough resignations in order to force early polls.

Protesters want Aoun out too

The protesters have been calling on Aoun to resign too because he failed the country like no other president before him . His support to Hezbollah got the country to the mess it is in today according to many analysts . Analysts concur that the real president in Lebanon and the real speaker and PM is Hezbollah chief Hassan Nasrallah and all the top Lebanon leaders are nothing but rubber stamps for Hezbollah and its backer Iran and the proof is the 2750 tons of Ammonium Nitrate that Iran provided to Hezbollah in 2013 with the aim of destabilizing Lebanon and the region. What was reported earlier that the Ammonium Nitrate was confiscated on its way to Mozambique is reportedly nothing but a cover up . Mozambique denied any link to the shipment and the shipment may have come from Georgia but the source is Iran , which is one of the worlds largest producers of this commodity . According to the captain of the ship that brought the chemical to Beirut Port Hezbollah has shipped some of the Ammonium Nitrate to Germany , UK, Cyprus , Syria , Yemen and other parts of the Middle East and what exploded is much less than 2750 tons . He said that if all the 2750 tons exploded , all Beirut would have been totally destroyed

Hezbollah reportedly kept three metric tons of ammonium nitrate in a storehouse in London, until MI5 and the London Metropolitan Police found it in 2015.

Hezbollah also reportedly stored hundreds of kilograms of ammonium nitrate in southern Germany, which were uncovered earlier this year.

Hezbollah kept the explosive in thousands of ice packs in four properties in northwest London. The ice pack deception tactic was used in Germany, as well according to the reports.

The Telegraph  reported that Cyprus experienced a case strikingly similar to the one in London. In 2015 in Cyprus, confessed Hezbollah agent Hussein Bassam Abdallah was sentenced to six years in jail after he was found with 8.2 tons of ammonia nitrate in his home.

The Telegraph said its information came after a three-month investigation in which more than 30 current and former officials in Britain, America and Cyprus were approached and court documents were obtained.

The Telegraph said that in Cyprus the ammonia nitrate was also stored in ice packs, saying that they were a convenient, seemingly harmless and easy to transport.

In 2019, the UK banned Hezbollah, making it a criminal offense to support or be a member of the group, carrying a sentence of up to 10 years in prison .