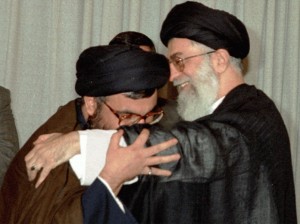 On September 10, 2019 Hezbollah chief Hassan Nasrallah () pledged allegiance to Iran’s supreme leader, Ali Khamenei (R) and put himself at his disposal and stressed that any military strike against Iran “will ignite the whole region and annihilate countries and peoples.” Hezbollah was established in 1982 by Iran as a part of IRGC’s foreign Quds force
Share:

Former Hezbollah chief, Subhi Al-Tufayli, held the current leadership of the militia organization responsible for the destruction of Lebanon, stressing that Hassan Nasrallah – who heads the Iranian-backed militant group – must be tried, along with his supporter, the Supreme Leader of Iran Ali Khamenei.

The Lebanese group Hezbollah – listed as a terrorist group by the US, UK, EU and Gulf states, including Saudi Arabia – is an Iranian proxy Shia militia. It was established by Iran’s Islamic Revolutionary Guard Corps (IRGC) in Lebanon in 1982 and remains dependent on Iranian finance and support.

The former Hezbollah leader said it was Hezbollah’s Iranian-supplied weapons that destroyed Lebanon and other countries in the region.

Tufayli comments came as Lebanon’s government resigned on Monday less than a week after a massive blast ripped through Beirut.

The explosion, thought to have been caused by 2,750 tons of ammonium nitrate held in a warehouse in the Port of Beirut, killed at least 160, injured thousands and displaced over 300,000 people in the capital.

Diab, who took office last December, was already under pressure for the lack of progress in resolving the country’s dire financial and economic situation.