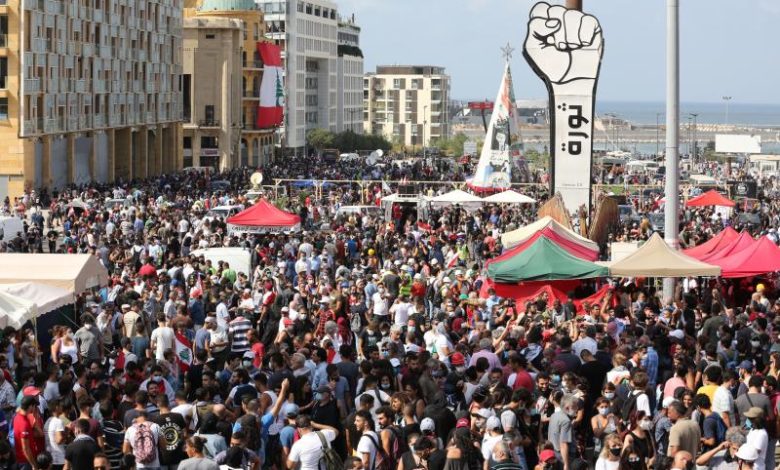 File photo Clashes between protesters and police broke out on Saturday in Beirut after thousands of people gathered in front of parliament demanding the resignation of the entire ruling class over the fatal port explosion.
Share:

Mock gallows nooses tied to brooms: Lebanese protesters on Saturday clamoured for bloody revenge against a leadership they blame for the massive blast that engulfed their capital.

“There is hatred and there is blood between us and our authorities,” said Najib Farah, a 35-year-old protester in central Beirut. “The people want revenge.”

On a street leading to parliament, young men lobbed stones at security forces who replied with tear gas, a familiar sight in Lebanon since last October.

Thousands of young men and women earlier revived the main camp of a months-long protest movement, some of them carrying portraits of blast victims and a banner bearing the names of the dead.

They pinned the blame for Tuesday’s mega-blast at Beirut port on leaders they say deserve nothing less than the fate of the 158 people who died as a result.

“You were corrupt, now you are criminals,” read another.

The explosion that disfigured the city and shocked the world is widely perceived as a direct consequence of the incompetence and corruption that have come to define Lebanon’s ruling class.

After a morning of funerals, protesters marched through the wreckage caused by the monster explosion that killed over 150 people, wounded 6,000 and left an estimated 300,000 temporarily homeless.

The crowds that converged on Martyrs Square breathed new life into a protest movement that started in October but was snuffed out a few months later by the coronavirus pandemic and a crippling economic crisis.

“There is now an opportunity for real change, it’s not like the other demonstrations since October,” Farah told AFP.

Demonstrators walked over shards of glass from gutted windows, chanting: “Revenge, revenge, until this regime reaches an end.”

Carrying a broom with a noose attached to it, Jad, a 25 year-old advertising professional, complained that the state was nowhere to be seen in the huge and ongoing cleanup effort across the city.

“Everything is trashed, we have had to repair the streets for three days, while there is no government presence at all,” he said.

“We are walking on the rubble of our city.”

This compounded the boiling anger many ordinary Lebanese have felt towards authorities since the blast.

“We are still under shock, but we know one thing for sure: we are going to wipe the floor with them,” he told AFP.

For a Lebanese public already crumbling under financial woes and beset by economic disillusionment, Tuesday’s blast was the straw that broke the camel’s back.

Lebanon’s worse political crisis in decades has plunged nearly half of the country’s population into poverty, up from a third before the crisis.

A coronavirus outbreak further shuttered an economy that must now contend with more than $3 billion in damages from the blast.

One protester raised a poster bearing portraits of top politicians and the phrase “Execute them”.

Medea Azoury, a 46-year-old demonstrator, said the fault lines have been drawn.

“We can’t take it anymore: we’re being held hostage, we can’t leave the country, we can’t withdraw money from the banks, and people are dying of hunger,” she said.

On top of all that, “there are now 300,000 people who are homeless and Beirut has been completely destroyed,” he added.

“This is the great return of the revolution and it’s either them or us.”