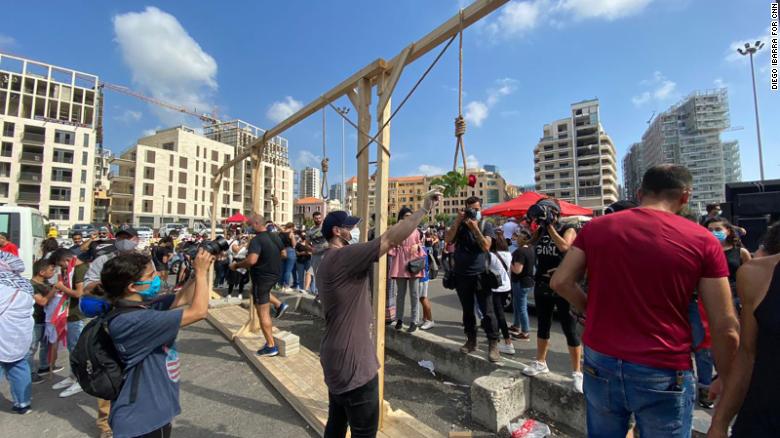 Effigies of leading politicians were attached to mock gallows which have become a key symbol of the demonstrations in Martyr Square in downtown Beirut . The gallows were erected in the same place where several people were hanged more than 100 years ago by the then ruling Ottoman Empire for revolting against Istanbul. The Martyr’s Square statue commemorates those executions.
Share:

The death toll from Tuesday’s catastrophic explosion at the port of Beirut has risen to 158, the Lebanese health ministry media office said on Saturday.

The number of people injured exceeds 6,000 and 21 are still reported missing, it said.

Protesters began arriving at Martyrs’ Square to participate in “Judgment Day”, to punish those responsible for the explosion of hanger No. 12 in the port of Beirut.

The organizers set mock gallows as a punishment for the politicians that brought the country to where it is today , they say.

“I lived the civil war. I was displaced, lived harsh days and we already lost houses in the war. We thought that was it,” said Hayat Gharazeddine, 51.

In Beirut protests have began, and they have built wooden gallows in the city center pic.twitter.com/T2fFp7BkHu

“These days however are worse than war. You have no idea how you might die now, which is the most scariest thing.””I wish I could hang them myself,” she added.