‘Lebanon will continue to sink, without reforms’, Macron says in Beirut as protesters called for regime ouster 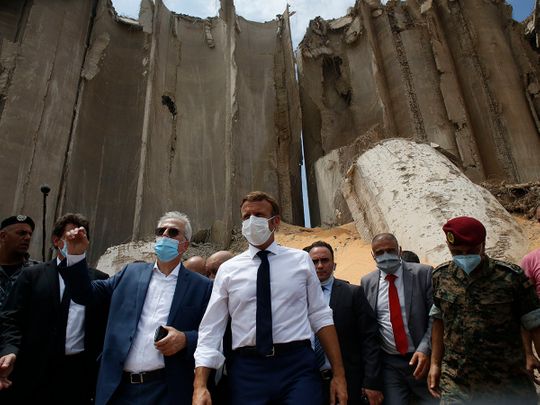 File photo: French President Emmanuel Macron, center , visits the devastated site of the explosion at the port of Beirut, Lebanon, Thursday Aug.6, 2020. French President Emmanuel Macron has arrived in Beirut to offer French support to Lebanon after the deadly port blast. None of the Lebanese leaders ever visited the port to inspect the damage , not even the president , the PM nor the Speaker
Share:

French President Emmanuel Macron visited shell-shocked Beirut Thursday, pledging support and urging change after a massive explosion devastated the Lebanese capital in a disaster that has has sparked grief and fury.

“Lebanon is not alone,” he tweeted on arrival before pledging Paris would coordinate international relief efforts after the colossal blast killed at least 137 people, wounded thousands and caused billions of dollars in damage.

But Macron also warned that Lebanon – already mired in a deep economic crisis, in desperate need of a bailout and torn by political turmoil – would “continue to sink” unless it implements urgent reforms.

Later, as he toured one of the hardest-hit neighborhoods, an angry crowd vented its fury at Lebanon’s political leaders, chanting “Revolution” and “The people want to bring down the regime,” slogans used during mass protests last year.

Macron said he was not there to endorse the “regime” and vowed that French aid would not fall into the “hands of corruption”.

“I will talk to all political forces to ask them for a new pact. I am here today to propose a new political pact to them,” he said, after being greeted by crowds.

First visit by foreign head of state since blast

Macron’s visit to the small Mediterranean country, France’s Middle East protege and former colonial-era protectorate, was the first by a foreign head of state since Tuesday’s unprecedented tragedy.

Two days on, Lebanon was still reeling from a blast so huge it was felt in neighbouring countries, its mushroom-shaped cloud drawing comparisons with the Hiroshima atom bomb.

“Apocalypse”, “Armageddon” – Lebanese were lost for words to describe the impact of the blast, which dwarfed anything the country had experienced in its violence-plagued history.

The provisional death toll stood at 137 but, with dozens missing and 5,000 wounded, the number of victims was expected to rise as rescue workers continued to comb through the rubble.

Offering a glimmer of hope amid the carnage, a French rescuer said there was a “good chance of finding… people alive”, especially a group believed to be trapped in a room under the rubble.

“We are looking for seven or eight missing people, who could be stuck in a control room buried by the explosion,” the colonel leading a rescue team told Macron as he surveyed the site.

Macron will head to the presidential palace later on Thursday for meetings with “all political actors”, including Prime Minister Hassan Diab. He will also meet with members of different political factions and civil society before giving a press conference.

Both sides are hoping Macron’s visit goes more smoothly than a trip last month by France’s top diplomat Jean-Yves Le Drian, who scolded Lebanon‘s political elite for being too “passive” in the face of an economic crisis compounded by the coronavirus pandemic.

In the aftermath of that visit, Foreign Minister Nassif Hitti resigned in protest at his government’s lack of crisis management.

“France is very popular here in Lebanon. There’s a longrunning history of a relationship between the two,” said FRANCE 24’s Leila Molana-Allen, reporting from Beirut.

“Recently, the tensions have been over the fact that of course the French government is not coordinating with the Lebanese government in the way that politicians here want them to but the Lebanese people, many of them, are happy about that. They feel that international money should not be going to this government.

“Many people who have been protesting for the last nine months, they say that this government will not spend it on the things that people actually need,” Molana-Allen added.

Paris prosecutor Rémy Heitz said Wednesday at least 21 French citizens were injured in the blast and prosecutors had opened a probe into “negligent injury” using their jurisdiction to investigate acts committed abroad.

Protesters call for revolution to oust the regime

MACRON was welcomed to Beirut by protesters calling for “revolution” in the aftermath of the devastating explosion that destroyed Lebanon’s main port.

The protesters could be heard chanting against Lebanese President Michel Aoun as they called for “revolution”.