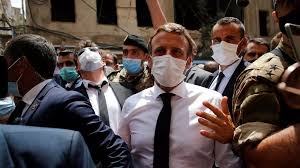 French President Emmanuel Macron visited shell-shocked Beirut on Thursday, pledging support and urging change after a massive explosion devastated the Lebanese capital in a disaster that has sparked grief and fury. Follow events on our liveblog.

Macron is the first foreign head of state to make the trip after two explosions rocked Beirut on Tuesday, killing scores, injuring thousands and inflicting billions of euros in damage.

The French leader, who is due to give a press conference at 5:30pm Paris time (GMT+2), has pledged the support of Lebanon‘s former colonial power and urged reform, telling crowds that he is not planning to write a blank cheque to the country’s discredited regime.

he UK has pledged a 5 million pound (€5.5 million) humanitarian support package for Lebanon and says it will send search and rescue teams and expert medical support.

Earlier, Italy said it was sending 8.5 tons of medical equipment to Lebanon in a second aid flight. Italy’s foreign ministry said the flight left from Brindisi on Thursday morning following a request from Lebanese authorities. On board were surgical and trauma kits. Earlier, a team of firefighters and experts in chemical and biological agents flew in to help.

The French president has called for an independent, transparent investigation into Tuesday’s massive explosion, saying it is “owed to the victims and their families” by Lebanese authorities.

After meeting with political leaders in Beirut, Macron mentioned the “anger in the street” he had witnessed earlier.“

There is a political, moral, economic and financial crisis that has lasted several months, several years. This implies strong political responsibility,” Macron said, adding that he discussed addressing corruption and other urgent reforms with Lebanon’s president and prime minister. “

I came here to show the support of the French nation for the Lebanese people,” Macron said, stressing the word “people”.

‘Beirut is destroyed, my heart is broken’: Locals in despair over Lebanon blast https://t.co/ceCMDWNfsH pic.twitter.com/OUijPGOGnA

🇫🇷 French President @EmmanuelMacron speaks from Lebanon after the explosions that devastated #Beirut.