‘Life at the top’: Lebanon mountain club, an oasis that makes you feel you are in another country 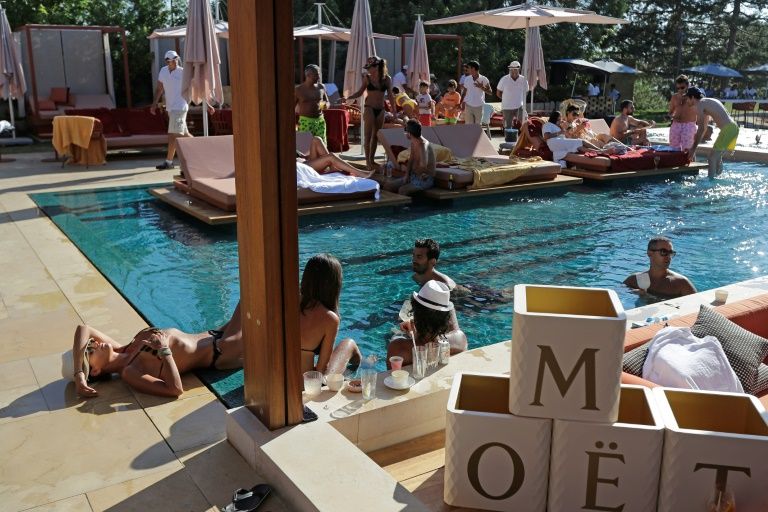 Nestled in a mountain resort town famous for its ski slopes, the Faqra Club in Lebanon is an oasis of luxury in an otherwise collapsing country (AFP Photo/JOSEPH EID)
Share:

Digging into a crunchy salad at an exclusive country club in the Lebanese mountains, Zeina el-Khalil said she was glad to have escaped here for the summer.

“The atmosphere in Beirut has become heavy and depressing. Reality is everywhere. But here we feel like we’re in another country,” she said.

Lebanon is mired in its worst economic crisis in decades, with the downturn sparking soaring inflation and plunging almost half the country’s population into poverty.

For the better-off, any plans of holidays abroad have been dashed this year after banks prevented dollar withdrawals or transfers and the coronavirus pandemic further complicated international travel.

But around 200 of the country’s most wealthy families have found an escape in Faqra Club, a private club perched 1,600 meters (5,250 feet) above the Mediterranean.

“Usually we spend our holidays abroad, but this year we can’t travel for financial reasons and COVID-19,” said the woman in her fifties with a golden tan.

Nestled in a mountain resort town famous for its ski slopes, the Faqra Club is an oasis of luxury in an otherwise collapsing country.

It’s motto, according to the official website, is: “Life at the top.”

Expensive cars packed the parking lot outside, while club members shuffled between its many facilities, which include a horse stable, a tennis court and a 9D movie theatre.

Around a long swimming pool, bronzed bodies sprawled on sofas and sun loungers, some sipping cocktails, as music blasted in the background.

“We won’t stay trapped in the house,” she told AFP from in the pool.

Sealed off from the many woes plaguing the rest of the country, the Faqra Club has become a magnet for those looking to make brisk business.

Many restaurants and stores have opened Faqra chains, with the hopes of softening the blow of an economic crisis that has seen the value of the Lebanese pound plummet against the dollar on the black market.

Along a bustling alley, around 40 kiosks dotted the side of the street, some displaying luxury swimsuits and silk Abayas.

Selim Heleiwa, who owns a high-end liquor store in Faqra, said that people here can afford luxury, unlike the rest of their compatriots.

“The customers here suffer less from the crisis. They are often people who work or have bank accounts abroad,” he told AFP.

Thousands of businesses across the country have closed, but for Heleiwa it is a “satisfactory” season, and he is not alone.

The Auberge de Faqra, the main hotel in Faqra Club, is fully booked every weekend, while landmark hotels across the country have shut down because of bankruptcy.

But at the black market exchange rate, the stay costs only around $100.

For those who have access to the greenback, the price is a bargain, even though the club has almost doubled its rate since last summer.

“Many of our customers have dollars. For them, the stay has actually become cheaper,” said a hotel employee, who asked not to be named.

The relative prosperity on display in Faqra has not gone unnoticed.

In early July, a video showing a teenager flaunting a dollar banknote to a TV reporter caused a storm of social media criticism against an out of touch elite sheltered from the country’s crisis.

But for Khalil, the criticism is unfounded.

“Getting the economy moving and making life better is not a bad thing,” said the woman, who is a director of a Lebanese NGO that teaches underprivileged children.

“All the people here are trying to help the poor. If they are trying to live (at the same time)… that should not be seen in a negative light.”

Leaving a nearby restaurant with his family, Sharif Zakka, a 38-year-old expatriate, echoed a similar sentiment.

“Being physically here doesn’t make you disconnected from people,” said the man who has rented a chalet for $2,500 a month.

It is also an economic lifeline for more than 200 employees, mostly young students, she told AFP. For its members, it also serves an important purpose.

“The Lebanese love life. It is our way of resisting.”