Israel warns Hezbollah against playing with fire after foiling an infiltration 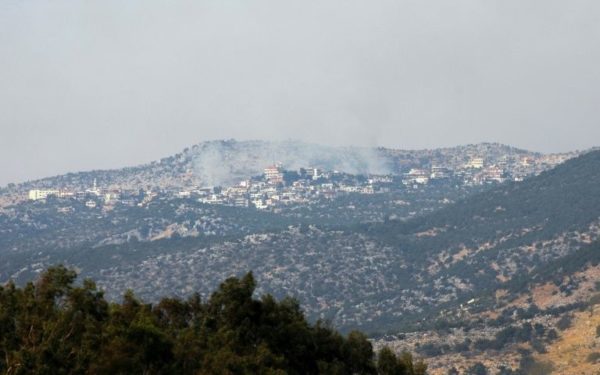 BEIRUT , LEBANON – Israel said it had repelled an attempt by Hezbollah fighters to penetrate its northern border on Monday, but the Lebanese group denied any involvement in the incident.

The border clash, which Israel said included an exchange of fire between its troops and gunmen, followed days of reported heightened tensions between Hezbollah and the Jewish state.

“Hezbollah is playing with fire and our response will be very strong,” the veteran premier added, insisting that the Shiite group and the Lebanese government, “carry responsibility” for Monday’s incident.

Israel’s army said a group of three to five men armed with assault rifles crossed the Blue Line that divides Israel and Lebanon in the disputed Mount Dov area, claimed by Lebanon, Syria and Israel as their own.

Israeli army spokesman Jonathan Conricus said that despite the area being forested, spotters had tracked the group as they approached the Blue Line.

“Once they crossed the border, we engaged,” he said.

There was an exchange of fire between the gunmen and Israeli forces, which did not result in any Israeli casualties, Conricus said.

“We confirmed visually that the terrorists fled back to Lebanon,” he added.

Details on any casualties from the Lebanese side were not immediately available.

Hezbollah, which has a large presence in the area where the incidents occurred, said in a statement that “it did not take part in any clash and did not open fire in today’s events.

“All that the enemy’s media is claiming about thwarting an infiltration operation from Lebanon into occupied Palestine… is completely false,” it added.

An AFP correspondent reported Israeli artillery bombardment on the hills of Kfarchouba in the Shebaa Farms area near the Israeli position of Roueysaat al-Alam, and said there were plumes of smoke rising above the area.

Israel’s army had initially ordered civilians on its side of the Blue Line to stay indoors, but later lifted those restrictions.

The UN considers the Mount Dov area as being in the Golan Heights, which Israel has occupied since the 1967 Six Day War.

The border clash came a week after an alleged Israeli missile attack hit positions of Syrian regime forces and their allies south of Damascus on July 20, killing five. Hezbollah said one of its own died in the raid.

Hezbollah number two Naim Qasim said in a televised interview on Sunday that “if the Israelis decide to launch a war, we will confront it and we will respond”.

Lebanon-based and Iran-backed Hezbollah has a substantial presence in Syria, where it is fighting in support of the Damascus government in the country’s civil war.

Israel has launched hundreds of strikes in Syria since the start of the conflict in 2011.

It has targeted government troops, allied Iranian forces and fighters from Hezbollah, saying its goal is to end Tehran’s military presence in Syria.

The Jewish state hit Syrian army targets late Friday after munitions were fired across the Syrian border into Israel.

There has been no confirmation that Hezbollah was involved in Friday’s cross-border fire.