IMF only way out of Lebanon crisis, says French FM 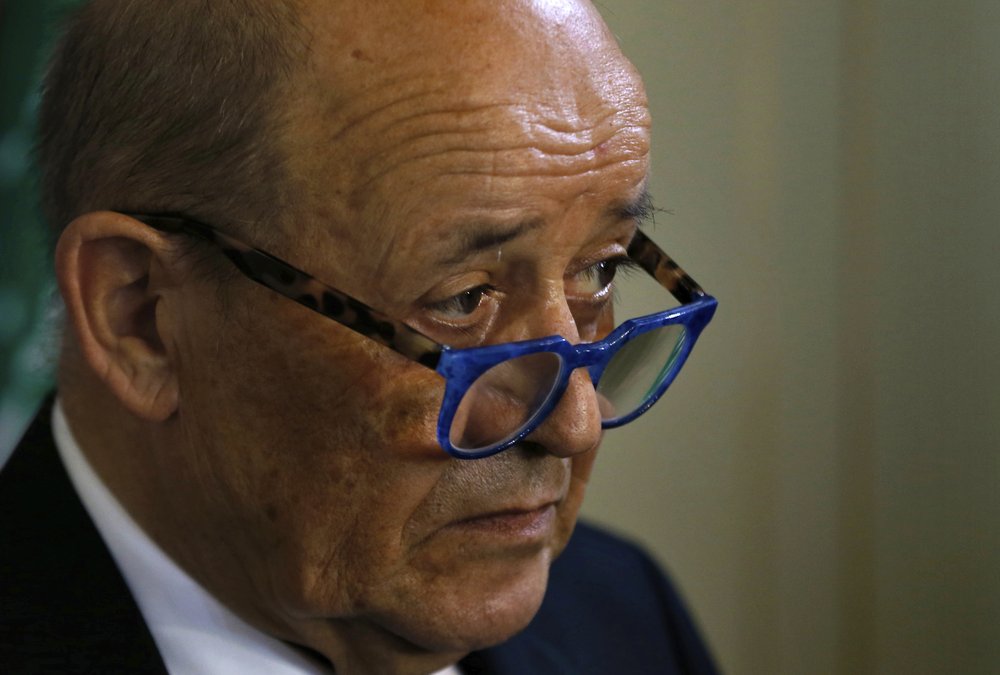 French Foreign Minister Jean-Yves Le Drian, and his Lebanese counterpart Nassif Hitti, hold a news conference following their meeting at the Lebanese foreign ministry in Beirut, Lebanon, Thursday, July. 23, 2020. Le Drian met with Lebanon’s president Thursday at the start of his two-day visit to the Mediterranean country that is witnessing the worst economic crisis of its modern history. (AP Photo/Bilal Hussein)
Share:

BEIRUT — France’s foreign minister said Thursday that talks with the International Monetary Fund are the only way out of Lebanon’s economic crisis, urging Lebanese officials to resume discussions with the lender that faltered over internal disagreements.

Jean-Yves Le Drian, the first Western official to visit Lebanon since its economy began to unravel last year, said that only concrete reforms would enable France, a major ally, to help Lebanon.

After meetings with senior Lebanese officials, including President Michel Aoun, Le Drian said the time is now critical and that the situation is very concerning.

“What I want to tell those responsible in Lebanon today is, ‘help yourselves and France and its partners will help you’,” he said. “It is the key message of my visit.”

France, the former colonial power in Lebanon, is the leading Western nation involved in efforts to help the Lebanese economy out of its dire straits. The solutions are well-known, Le Drian said, and are necessary to avoid destabilizing Lebanon and its model of tolerance and openness in the region.

The crisis has deepened since the government defaulted on its sovereign debt in March, the eruption of the coronavirus pandemic and the restrictions that it brought. Talks with the IMF over an economic rescue plan have stalled. Unemployment and poverty rates have reached new heights, while basic resources, such as fuel, have became scarce as the government’s resources dried up.

The IMF talks, which began in May, have stalled over disagreements between Lebanese politicians on assessing losses and how to move forward. Lebanese officials hope successful IMF talks will open the way for $11 billion in aid pledged during a 2018 conference hosted by France.

“There is no alternative to an IMF program that will allow Lebanon to get out of the crisis,” Le Drian said. “France is ready to mobilize itself and its partners to support Lebanon but credible and serious reform measures must be taken,” Le Drian said.

Le Drian said an effective audit of the losses of the Central Bank of Lebanon would help kick-start the talks. The Lebanese government approved this week a forensic audit after weeks of stalling. The audit could take months.

Le Drian said efforts by France would only work if Lebanese officials do their part. He said a reform of the electricity sector, which has cost the government about $2 billion in debt a year, has so far been discouraging.

A new government, backed by the powerful Hezbollah group and its allies, was formed in January and has since been bogged down by domestic rivalries and economic power centers on ways to proceed with reforms and the IMF talks. Adding to the domestic tension is the fact that Hezbollah is facing increased U.S. sanctions, part of Washington’s campaign against Iran and its allies in the region.

“The Lebanese have strongly expressed their legitimate aspirations through popular protests since October, they went on the streets to express their thirst for change, for transparency, to fight for corruption and for better governance,” Le Drian said. “Their call has not been heard so far.”

The economic crisis has sparked a free-fall of the national currency against the dollar, which had been used interchangeably with the Lebanese pound. Unemployment and poverty have since soared and U.N. aid agencies began wide distribution of food to needy families for the first time since Lebanon’s last devastating war with Israel in 2006.