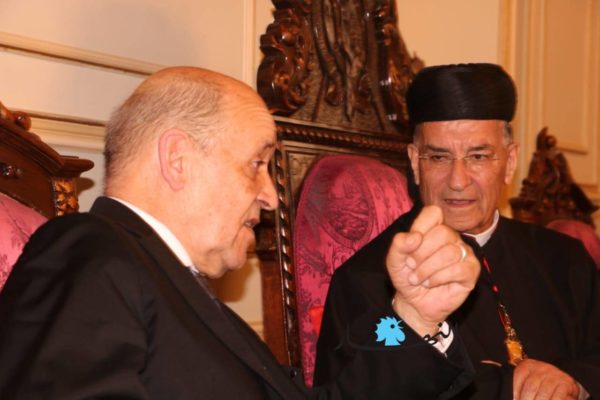 Al-Rai reportedly told the visiting French minister that the Lebanese and regional circumstances encouraged him to propose the positive and effective neutrality project in order to rescue Lebanon, especially that historically Lebanon has been a neutral country,” a Bkirki statement said.

“The system of neutrality requires the rise of a strong state through its institutions and army so that it manages to resolve the pending domestic issues and defend Lebanon’s sovereignty and independence,” the patriarch told his French visitor.

Le Drian expressed his appreciation of al-Rai’s initiative and was reportedly quoted as saying “Lebanon’s sovereignty, which France is keen on, requires that Lebanon be a neutral country dissociated from conflicts and axes.”

“Lebanon possesses all the requirements to rise again,” the French minister stressed , according to the Bkirki statement.

Earlier today during a joint press conference with His Lebanese counterpart the visiting French said it was essential for Lebanon to respect a policy of staying out of conflicts in the region, where the Lebanese Shi’ite group Hezbollah has supported Iran in its power struggle with Sunni-led Gulf Arab states.

His comment during the press conference was a possible nod to Patriarch al-Rai’s campaign for Lebanon neutrality. Rai has been stressing in his campaign that only neutrality makes Lebanon an independent and sovereign state capable of imposing its authority on all Lebanon’s territory.