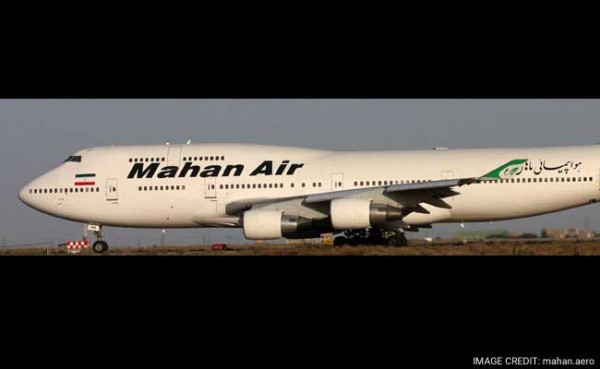 An engine of a Boeing 747 operated by Iran’s Mahan Air detached from the plane.Mahan Airways had used a small Iraqi company called Al-Naser as cover to bypass the sanctions and purchased aircraft from European companies.
Share:

The agency initially reported a single Israeli jet had come near the plane but later quoted the pilot as saying there were two jets which identified themselves as American.

The pilot of the passenger plane contacted the jet pilots to warn them about keeping a safe distance and the jet pilots identified themselves as American, IRIB reported.

Video posted by the agency showed a single jet from the window of the plane and comments from a passenger who had blood on his face.

The Iranian plane, belonging to Mahan Air, was heading from Tehran to Beirut and landed safely in Beirut, an airport source told Reuters.

Israel and the United States have long accused Mahan Air of ferrying weapons for Iranian-linked guerrillas in Syria and elsewhere.

One passenger in the IRIB report described how his head had hit the roof of the plane during the change in altitude and video also showed an elderly passenger sprawled on the floor.

In an unusual development Iraqpost website quoted , a well-informed source saying the intercepting jet was a Soviet-origin Sukhoi Su-27 that carried dangerous weapons.

All of the passengers reportedly came off the plane and only some had minor injuries, the head of the Beirut airport told Reuters.