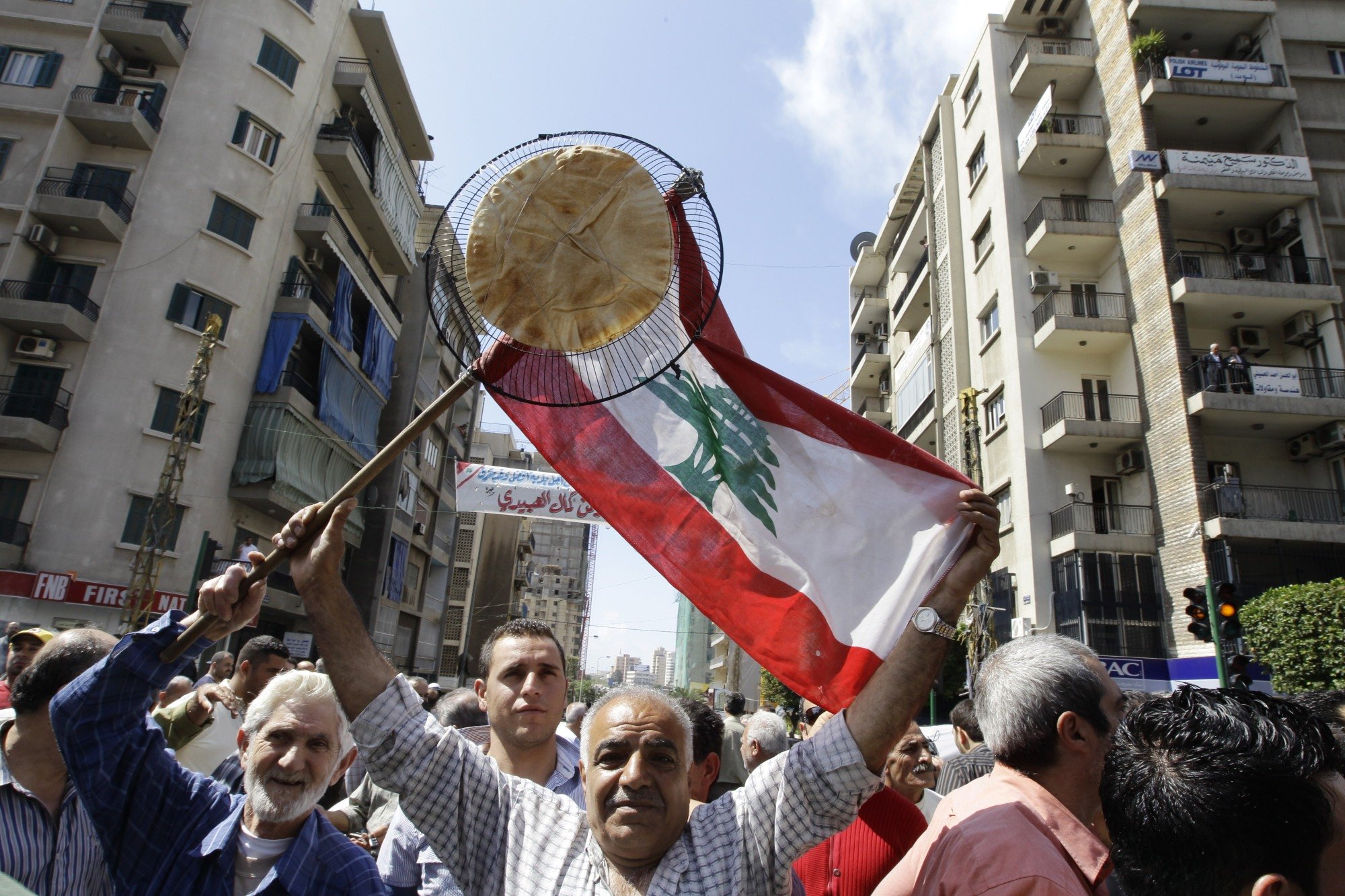 Lebanese bus and taxi drivers carry a Lebanese flag and a large flatbread during a rally in Beirut protesting fuel prices (AFP)
Share:

Abu Sleiman has been a public van driver for the past 15 years, taking the same lengthy route every day from Wadi Khalid in Lebanon’s northernmost Akkar province along the Syrian border to the Cola Bridge in Beirut.

Like other public transport drivers in Lebanon, he had to stop working and stay indoors during the coronavirus lockdown, which started in March and has eased in various stages since early May. Curbs on vehicle movement were lifted nationwide in mid-June.

“Lots of people from Akkar take my van to go to work in Beirut,” Abu Sleiman told Middle East Eye. “But over the past two weeks, there were only a few riders.”

The driver’s worries go well beyond the pandemic, however, as Lebanon’s crippling economic crisis continues to take a turn for the worse.

Economy Minister Raoul Nehme has projected that 60 percent of the population could be living below the poverty line by the end of the year.

Without a state-sanctioned public transport system in Lebanon, informal vans, mini-buses, and shared taxis known as services are the most affordable option to get around for much of the population.

But the work has become increasingly unsustainable, van and service drivers told MEE, as a recent increase in fares is seen as insufficient to address the scope of the economic crisis and the lack of institutional support for the sector.

Fares go up, revenue goes down

Like other van drivers, Abu Sleiman typically charges 1,000 Lebanese liras. a little more for those traveling all the way to Beirut. Lebanon’s currency, long pegged to the United States dollar, has been officially valued at around 1,500LL to $1, which means that for each ride he would earn a mere $0.66 at the official exchange rate.

However, the local currency’s dramatic devaluation on the black market over the past nine months means that he now earns effectively just short of about $0.13 per ride.

A greenback shortage has since September steadily devalued the local currency, now by around 80 percent, accompanied by sporadic and uncontrolled inflation across the Lebanese market. The country is now struggling to import wheat, fuel, and medicine, while food prices have gone up by at least 56 percent, according to the World Food Programme.

Public Works and Transport Minister Michel Najjar announced on Wednesday an increase in public transport fees that would increase the fare for a standard service ride from 2,000LL to 3,000LL, and for vans and buses like Abu Sleiman’s from 1,000LL to 1,500LL.

The announcement marked the first fare increase since 2008.

But the public transport fare rise fails to make up for the Lebanese pound’s slide. A 2,000 LL service ride used to be worth $1.33 in September; now, the same ride at 3,000LL is worth around $0.33 – only a quarter of its previous value. According to a document with the new prices obtained by MEE, a ride from Akkar province to Beirut would now cost roughly $0.63.

Marwan Fayad, the head of the General Confederation of Drivers and Transport Workers, told MEE that this was a “middle-ground” solution for both drivers and customers.

“The general director for the Ministry of Public Transportation did a study with experts, which recommended that [the cost of a standard service ride] should go up to between 3,000 and 4,000,” Fayad said, explaining that this took into consideration increasing maintenance and living costs. “We agreed at 3,000.”

For Chadi Faraj, co-founder of civil society organisation Riders’ Rights, the fare increase was a difficult choice, given how widespread an impact the economic crisis has had in such a short time.

“Those drivers need the rise,” he told MEE. “But from a rider’s perspective, many cannot afford it.”

Faraj also noted that “riders’ voices” were not taken into account when deciding on the fare rise.

Operating at a loss

The combined effect of the pandemic and the economic crisis has had a devastating effect on drivers’ ability to earn a living.Lebanon economic crisis: Food prices are so high not even shops can afford themRead More »

Amid a lack of governmental or syndicate support for drivers, Faraj said Riders’ Rights, an organisation focused on mobility justice and advocating for public transport in Lebanon, had to step in when Covid-19 first emerged in the country.

The organisation provided face shields and masks to drivers and helped them to implement health safety measures and protocols in their vehicles. Riders’ Rights also launched a fundraiser to help palliate drivers’ loss of revenue during the pandemic.

“Now we’re working in crisis management with coronavirus and the economic crisis,” he said.

Amin, a service driver in Beirut, said that his daily revenue was now lower than ever.

“We really have no idea what to expect [with] how the government decides to handle how prices have changed and so on.”

Back in Akkar, with many of Abu Sleiman’s customers working in the food and beverage business now out of a job, he now fears that the decline will continue, as rampant unemployment continues to plague an economically bludgeoned Lebanon.

Abu Sleiman and most of his fellow drivers will continue to operate at a loss, as they also face skyrocketing costs to sustain their households and their vehicles.

Many drivers now don’t earn enough revenue to fill up their tanks.

“One of my colleagues decided to give up the van he leased back to the owner because of lack of customers,” Abu Sleiman said. “We end up paying for fuel out of our own pockets.”

Economy Minister Raoul Nehme recently announced that Lebanon will subsidise some 300 food items, and Fayad had hoped the same would be done for vehicle parts and other items, which would ease maintenance and operating costs.

“The economy ministry said no,” a frustrated Fayad told MEE. “They’re living in a different world. They live on the moon.”

“I don’t understand how a cashew or pistachio is more important,” he said.

‘Crises are meant for change’

Tension has been mounting for quite some time among Lebanon’s drivers. In late March, a taxi driver in Beirut set his vehicle on fire after he was fined for violating Covid-19 protocol. While attempting to do the same to himself, he was stopped by concerned bystanders.

Since then, things have only gotten worse.

Taxi and other public transport drivers have held protests in Beirut in recent weeks, often at the interior ministry near the capital’s downtown neighbourhood, calling for the government to subsidise mounting costs and provide financial incentives to help cope with the economic crisis.

Long dismissed as being “only for workers and the poor,” Faraj said, Lebanon’s public transport could end up being transformed by the economic downturn, as fewer Lebanese are able to afford cars or their upkeep.

For years, Riders’ Rights has pushed for “a just integration” of the existing informal public transportation network into a formal national system, and now is the time for Lebanese authorities to push for such measures, Faraj said.

“Crises are meant for change, but how we will tackle that change is the main question,” he said. “They must work – as a government, as municipalities – to take care of the system… start to invest more in those [informal] systems now, give people more awareness, give them more incentives.

“They can work in 100 ways, but they must start somewhere.”

By not developing a national public transport system nor supporting the informal system in times of crisis, Faraj said, the Lebanese government has pushed drivers to raise their prices in order to cope with the spiralling economy.

“The people are paying” to keep this vital industry running, he said, “and not the government”.

“We are doing their job… why aren’t they doing it?”

Amin, like many other drivers, expressed concern over the lack of benefits they receive by being registered in one of the country’s public transport syndicates. “I’m in a syndicate, and I don’t get any benefits. Nothing,” he told MEE.

Faraj echoed similar concerns over the role of the many drivers’ syndicates in the country, often divided along political lines.

“Where is the money for the drivers? Where were those syndicates during coronavirus? Did they help drivers the way we tried to help drivers?” he asked.

For now, things look bleak for Lebanon’s public transport drivers. Many are now ending their vehicle leases and waiting for better days; it has come to a point where working is no longer more financially sustainable than staying at home.

“I don’t know what the solution is to be honest. I wish the state would help with some compensation,”  Abu Sleiman said. “Things are not working out.”