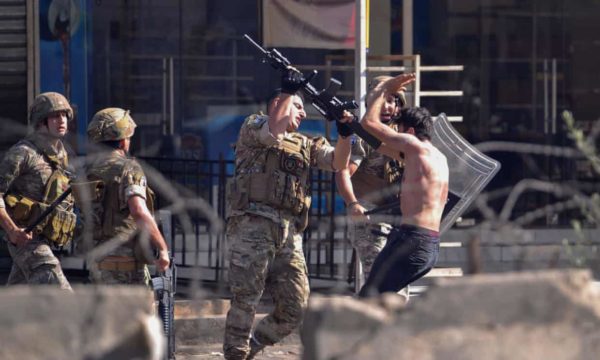 A coalition of rights groups said Monday that “repression” and “intimidation” are threatening free speech in Lebanon, hit by an economic meltdown and months of angry protests.

Since mass demonstrations erupted in October demanding the wholesale removal of a ruling class deemed inept and corrupt, authorities have cracked down on protesters, the alliance said in a statement.

“Instead of heeding protesters’ calls for accountability, the authorities are waging a campaign of repression against people who expose corruption and rightfully criticise the government’s significant failings,” it said.

The alliance includes international watchdogs Amnesty International and Human Rights Watch along with local groups such as the Samir Kassir Foundation.

It warned that “powerful political and religious figures have increasingly used the country’s criminal insult and defamation laws as a tool for retaliation and repression against critics”.

The statement urged public prosecutors and security agencies “to refrain from summoning people to investigations for exercising their right to free speech”.

Aya Majzoub, Lebanon researcher at HRW, said the group had documented “more than 60 people called in for interrogation based on things they wrote on social media” since protests started on October 17.

She cited a prosecutor’s decision to investigate social media posts deemed to be insulting to the president, as well as army intelligence officers stopping reporters filming on the streets of Beirut last week.

“All of this is creating a climate of intimidation in Lebanon where people don’t feel they are safe to speak their mind any more,” she said.

Debt-laden Lebanon is in the throes of its worst economic crisis since the 1975-1990 civil war, with almost half its population now living in poverty.

Banks have severely restricted dollar withdrawals and the Lebanese pound has plummeted to record lows on the black market, sparking price hikes and fanning public anger.

The novel coronavirus, which has infected over 2,300 people and killed 36, has forced lockdown measures that further exacerbated the economic crisis.

Protests in recent months have been smaller and largely peaceful, but some have spiralled into clashes between demonstrators and security forces firing tear gas and rubber bullets.

Ayman Mhanna, the director of the Samir Kassir Foundation, said 21 journalists were “directly physically assaulted” while covering the demonstrations.

“Working on the ground has become a nightmare,” said Doja Daoud, a member of the Alternative Media Syndicate that joined the coalition.

“Security forces interrogate correspondents and ask them about the reasons behind their coverage,” he added.