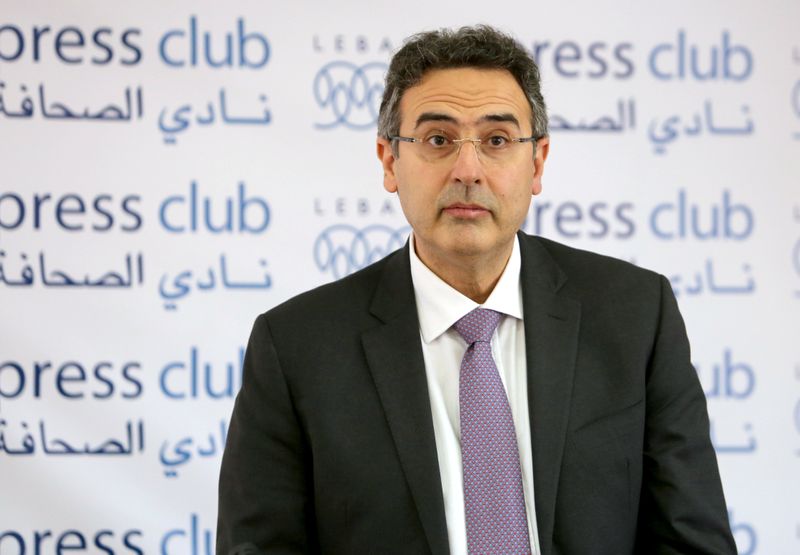 Alain Bifani, a senior member of Lebanon’s negotiating team with the International Monetary Fund (IMF), arrives to deliver a news conference after his resignation from his post as finance ministry director general, in Beirut, Lebanon June 29, 2020. REUTERS/Aziz Taher
Share:

Bankers have “smuggled” as much as $6bn out of Lebanon since October, circumventing controls launched to stem capital flight because the nation plunged into its worst monetary disaster in 30 years, based on the nation’s former high finance civil servant.

Alain Bifani, who resigned as director-general of public finance two weeks in the past in protest on the state’s dealing with of the disaster, advised the Financial Times in an interview that the political and banking elite have been attempting to “continue to benefit from the system without taking any loss”, whereas abnormal Lebanese “may today pay a terrible price”.

Mr Bifani claimed banking sector information confirmed $5.5bn-$6bn had been “smuggled outside the country” by “bankers who would [not allow] every other depositor to take $100”. He reached the estimate primarily based on his interpretation of the figures and session with Lebanon’s banking management authority, he stated.

Fears of a run on the banks prompted the introduction of casual banking curbs final October. Under these, depositors are capable of withdraw as little as $200 each two weeks and might switch funds overseas solely in distinctive circumstances. The authorities has not handed capital controls laws, with banks as a substitute imposing their very own limits.

Despite the controls, overseas forex deposits of resident clients dropped from $82bn final autumn to $71bn by May, based on central financial institution information. Riad Salame, the financial institution’s governor, stated a lot of this decline was associated to the settling of home loans.

The finance ministry’s high civil servant for 20 years till his resignation, Mr Bifani is the highest-ranking authorities insider to sound the alarm over what is known as the fast “dismantling of the state”.

Comparing the issues with 1975, when a 15-year civil struggle broke out, Mr Bifani stated he noticed Lebanon’s “old demons coming back. And 5m human beings caught in a very, very dangerous and nasty situation”.

His warning comes as Lebanon is mired in an financial disaster rooted in dependence on imports and a $90bn state debt pile, which it defaulted on in March. Mass anti-corruption protests final October that toppled the federal government, extra unrest this spring, a banking disaster and the influence of the Covid-19 pandemic intensified the nation’s woes.

Gross home product is predicted to shrink 13.8 per cent this 12 months, based on official figures, laborious forex inflows have stopped, the Lebanese pound has depreciated by 80 per cent on the black market and inflation is about 56 per cent. The state of affairs has stoked fears that sectarian tensions might be reignited.

Mr Bifani precipitated shockwaves in Lebanon when he grew to become the second official to resign from the federal government workforce negotiating a bailout with the IMF. Kulluna Irada, a Lebanese political reform foyer group, stated the resignation of the nation’s highest-profile civil servant “exposed a system incapable of reform and beholden to special interests”. Alain Bifani says abnormal Lebanese are paying a ‘terrible price’ within the financial disaster

The IMF talks have since floor to a halt over inside Lebanese disagreements on the scale of monetary sector losses.

Critics have accused Mr Bifani, a former monetary advisor and banker, of abandoning ship within the center of the storm and of eyeing the central financial institution governorship. He denied wanting the job, calling it a “terrible task”.

Although Mr Bifani has courted controversy by means of previous run-ins with politicians, opponents say it’s too late for him to lambast a regime he was half of for 20 years.

He shrugs off the criticism. “If you’re interested in what is happening in your country, you either fight or you don’t,” he stated, asserting that he was stepping down now relatively than being complicit in a collapse that may worsen inequality.

The disaster had revealed the dedication of the political class that has monopolised energy since 1990 to guard its vested pursuits, he stated.

Describing a “dirty money elite” of politicians and bankers, he accused them of permitting the inhabitants to take the brunt of the financial disaster. “What is being done now is that losses are shifted massively to the population through the fall of the Lebanese pound,” he stated.