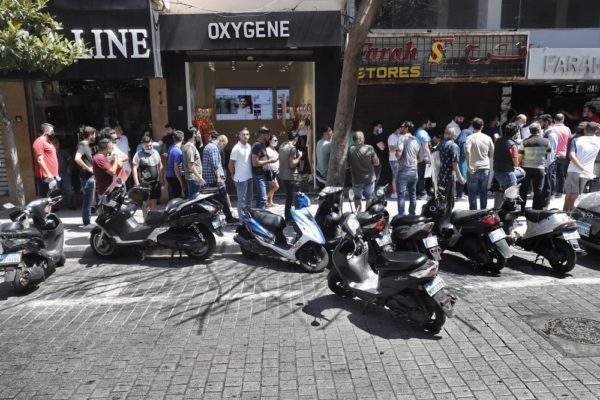 People line up outside an exchange shop to buy U.S. dollars, in Beirut, Lebanon, June 17, 2020. Lebanon’s financial meltdown has thrown its people into a frantic search for dollars as the local currency’s value evaporates.
Share:

BEIRUT – The Lebanese pound has strengthened against the U.S. dollar on the informal market this month, partly thanks to travellers bringing in scarce dollars since the airport reopened, traders said.

Dollars traded at around 7,300 Lebanese pounds on Monday, two exchange dealers said, compared with the rate of close to 10,000 pounds/dollar late last month that triggered a string of protests.

A crippling financial meltdown, exacerbated by coronavirus restrictions, has slashed the value of the local currency this year, sending prices and poverty rates soaring.

Currency dealers told Reuters demand for the greenback eased as travellers brought dollars with them when the airport re-opened on July 1 after months of lockdown.

Other market participants also cited the government’s pledge to subsidise around 300 essential food items and basic goods, and support importers and manufacturers of those items and goods.

The central bank said last week it would provide them with foreign currency at a fixed rate of 3,900 Lebanese pounds per dollar.

“With the announcement of the food basket and the arrival of fresh money from abroad … all cause a drop, but there are no fundamentals,” said Hani Bohsali, head of the syndicate of foodstuffs importers. “Even the drop could be speculative.”

The central bank has sought to stabilise the rate at exchange houses by setting a unified rate with them each day, which on Monday was announced at 3,850/3900 pounds for buying and selling. Still, importers and others have said it was nearly impossible to secure dollars at those rates.

At Monday’s rate on the informal market, the pound was still much weaker than an official peg of 1,507.5 – in place since 1997 and now only available for imports of fuel, wheat and medicine.