Trump’s worldview forged by neglect and trauma at home, niece says in book 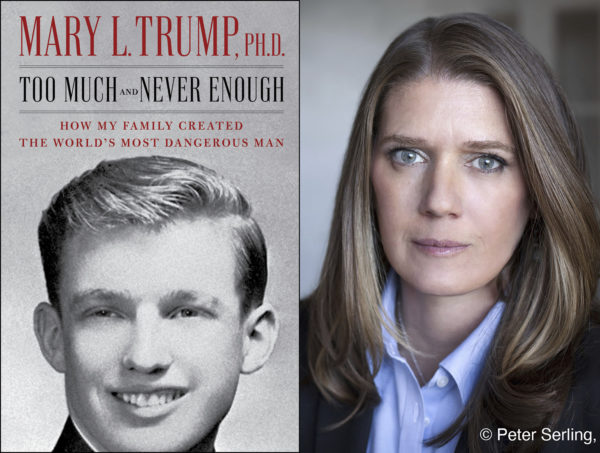 Trump was victim of ‘child abuse’ at hands of his father, who ’caused him terror that would scar him for life’, claims President’s niece in her book “Too Much and Never Enough: How My Family Created the World’s Most Dangerous Man,”

WASHINGTON – A tell-all book by President Donald Trump’s niece describes a family riven by a series of traumas, exacerbated by a daunting patriarch who “destroyed” Donald Trump by short-circuiting his “ability to develop and experience the entire spectrum of human emotion,” according to a copy of the forthcoming memoir obtained by The Washington Post.

President Trump’s view of the world was shaped by his desire during childhood to avoid his father’s disapproval, according to the niece, Mary L. Trump, whose book is by turns a family history and a psychological analysis of her uncle.

But she writes that as Donald matured, his father came to envy his son’s “confidence and brazenness,” as well as his seemingly insatiable desire to flout rules and conventions, traits that brought them closer together as Donald became the right-hand man in the family real estate business.

Mary L. Trump’s father, Fred Jr. – the president’s older brother – died of an alcohol-related illness in 1981, when she was 16 years old. President Trump told The Post last year that he and his father both pushed Fred Jr. to go into the family business, which Trump said he now regrets.

The book marks the first time that a member of Trump’s family has published such a memoir, providing an often bitter and blistering insider account of the forces that shaped Donald Trump, and so alarming the family that the president’s brother tried to block its publication in court. Mary L. Trump has long been estranged from the family after a dispute over her inheritance and other matters.

While the arc of Trump’s life has been well-chronicled, Mary L. Trump, 55, provides new details of family fights and recriminations, and she infuses the volume with her background as a clinical psychologist to analyze her uncle. Ahead of the July 14 publication date, the book became an instant bestseller based on advance orders, underscoring the intense interest among the public in the forces that shaped the man who became president.

The book, “Too Much and Never Enough: How My Family Created the World’s Most Dangerous Man,” chronicles the fruitless efforts by Mary’s father, Fred Jr., to earn his father’s respect as an employee. His younger brother Donald reliably ridiculed him as a failure who spent too much time following his passion, aviation, and not enough on the family business, the book says.

Donald escaped his father’s contempt, Mary L. Trump writes, because “his personality served his father’s purpose. That’s what sociopaths do: they co-opt others and use them toward their own ends – ruthlessly and efficiently, with no tolerance for dissent or resistance.”

Kellyanne Conway, White House counselor, told reporters Tuesday that President Trump loved his late brother and always speaks favorably of him. Of the president and his niece, Conway said: “He’s not her patient, he’s her uncle. . . . As for books generally, obviously they’re not fact-checked, nobody’s under oath.”

The president, Mary L. Trump says, is a product of his domineering father and was acutely aware of avoiding the scorn that Fred Sr. heaped on the older brother, called Freddy. “By limiting Donald’s access to his own feelings and rendering many of them unacceptable, Fred perverted his son’s perception of the world and damaged his ability to live in it.”

From an early age, Mary L. Trump writes, the future president demonstrated a willingness to cheat and a penchant for ridicule, once telling a neighborhood girl how “disappointed” he was by where she attended boarding school.

After graduating from military school, then living at home with his parents and commuting to Fordham University, Donald decided to apply to the University of Pennsylvania, which he perceived as a more prestigious school, but worried that his grades alone wouldn’t win him entry.

Mary L. Trump writes that Donald’s sister Maryanne “had been doing his homework for him” but that she couldn’t take standardized tests in his place. “To hedge his bets, he enlisted Joe Shapiro, a smart kid with a reputation for being a good test taker, to take his SATs for him. . . . Donald, who never lacked for funds, paid his buddy well.”

Trump was friends with a young man named Joe Shapiro when he attended the University of Pennsylvania. If Mary L. Trump is referring to that person, he is deceased, according to Shapiro’s sister, Beth Shapiro. She said in a telephone interview that her brother did not meet Trump until they both attended the Philadelphia school, and thus, she said, the timing the book describes does not make sense. “My brother never took a test for anybody else in his entire life,” she said.

Reached by phone, Shapiro’s wife, former tennis star Pam Shriver, said her late husband never said he had taken a test for Trump, nor did she believe he would. “He would never, ever take tests for someone,” Shriver said. “He followed things to the letter. This is not my late husband.”

For years, Donald Trump said his admittance to what was then called the Wharton School of Finance at the University of Pennsylvania was proof that he was a “super genius.” The Post reported last year that the admissions officer who interviewed Trump was a close friend of Fred Jr., that many applicants to the school were admitted at that time and that the admissions officer did not see any evidence that Trump was a “super genius.”

Mary L. Trump writes that her grandfather’s children routinely lied to him, but for different reasons. For her father, “lying was defensive – not simply a way to circumvent his father’s disapproval or to avoid punishment, as it was for the others, but a way to survive.”

For her uncle Donald, however, “lying was primarily a mode of self-aggrandizement meant to convince other people he was better than he actually was,” Mary L. Trump writes.

he wrote that her father had a “natural sense of humor, sense of adventure, and sensitivity,” which he worked hard to hide from the family patriarch.

“Softness was unthinkable in his namesake,” she writes.

“Fred [Sr.] hated it when his oldest son screwed up or failed to intuit what was required of him, but he hated it even more when, after being taken to task, Freddy apologized. ‘Sorry, Dad,’ ” Mary writes of the way her grandfather treated her father. Fred Sr. “would mock him. Fred wanted his oldest son to be a ‘killer.’ “

Donald, 7 1/2 years younger than his brother, “had plenty of time to learn from watching Fred humiliate” his eldest son, Mary L. Trump writes. “The lesson he learned, at its simplest, was that it was wrong to be like Freddy: Fred didn’t respect his oldest son, so neither would Donald.”

This was not Mary L. Trump’s first effort to write about her uncle. Decades ago, she writes, Donald Trump asked her to help write his book “The Art of the Comeback.” She says she did research and tried to interview her uncle, but he kept putting her off, and the publisher eventually sought someone with more experience as a co-author. The anecdote underscores that Mary L. Trump’s relationship with her uncle was, at times, a close one.

But the relationship fell apart when she learned that Donald and his siblings were trying to prevent her and her brother, Fred III, from receiving most of what they believed they would inherit from Fred Sr. If her father had lived, he would have expected to get 20 percent of the estate, she writes. Instead, she says, the Trump family intended to give her “less than a tenth of one percent of what my aunts and uncles inherited.”

While Mary L. Trump says she and her brother challenged the will, she does not reveal how much she eventually received, which is covered by a confidentiality agreement. Robert Trump, the president’s younger brother, filed a petition seeking to stop publication of the book by citing that agreement, but the New York Supreme Court last week lifted a temporary restraining order against publisher Simon & Schuster.

Mary L. Trump writes that when her uncle announced his candidacy for president in 2015, “I didn’t take it seriously. I didn’t think Donald took it seriously.” The heir to the family business, she writes, “simply wanted free publicity for his brand.”

She says that Trump’s sister Maryanne, who served until last year as a federal judge, shared her assessment and that both women were incensed to see prominent religious figures embrace Trump and hold him out as a religious man. “The only time Donald went to church was when the cameras were there. It’s mind boggling. He has no principles. None!” Maryanne Trump said, according to her niece.

During the fight over the inheritance, Mary L. Trump says, she was told that her grandfather’s estate was worth $30 million. But after being contacted by a reporter for the New York Times in 2017, she retrieved boxes of financial papers that she says showed the estate was actually worth $1 billion. She writes that she became a key source for the newspaper’s 2018 investigation of the family finances, which won a Pulitzer Prize.