Hezbollah chief says US envoy should refrain from going on TV 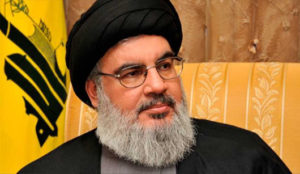 BEIRUT: Hezbollah leader Hassan Nasrallah requested that the US ambassador to Beirut should refrain from going on TV , accusing her of “acting like a military ruler,” and inciting sectarian strife

in a televised speech Tuesday evening ,he commented on the diplomatic rift that occurred last week by saying : “The US ambassador is inciting Lebanese parties and officials against Hezbollah and its allies, pushing Lebanon toward internal strife and civil war,”

“I request that the US ambassador refrains from going on our TV stations and talking about democracy and human rights, because she represents a country that has waged wars, destroyed countries and stolen their resources,” he added

He accused the US Embassy of attempting to “starve Lebanon,” by preventing investments in the country and scaring off foreign investments. “

Hezbollah’s parliamentary bloc will be submitting a request to the Foreign Ministry to summon the US ambassador and ask her to adhere to diplomatic protocol and the Vienna Convention, he said

During an interview with Al-Hadath TV channel aired on June 26, U.S. Ambassador Dorothy Shea said the United States has “grave concerns about the role of Hezbollah,” labeling it as “a designated terrorist organization.”

“It has siphoned off billions of dollars that should have gone into government coffers so that the government can provide basic services to its people,” she said. “It has obstructed some of the economic reforms the Lebanese economy so desperately needs,” Shea added.

Judge Mohammed Mazeh, the urgent matters judge in the southern city of Tyre,( a stronghold of the Iranian backed Hezbollah) sparked an outrage after he issued a ruling banning local and foreign media working in the country from airing or publishing any comments by Shea for a one-year period.

Narallah in his speech expressed pride in the judge’s decision, calling it a “brave response.”

“What would happen if the Lebanese ambassador in Washington commented on Trump’s policies?” Nasrallah asked.

But Lebanese officials apologized to the US ambassador in the country on June 27 , one day after she criticized Hezbollah in a public interview.

A senior official from President Michel Aoun’s office criticized the south Lebanon judge’s order saying it contradicts international and diplomatic treaties. “This judge should get a warning of some sorts from the Higher Judicial Council,” the official told Al Arabiya English, adding that it was out of the judge’s prerogatives to make such a decision.

According to the official, the Lebanese government reached out to the ambassador to apologize and dismiss the order.

Lebanon Maronite Patriarch Beshara al-Rai blasted on Sunday June 28 the judicial ruling against the U.S. ambassador and reminded the Lebanese of “the freedom of expression that characterizes Lebanon in its region.”

The patriarch sounded outraged over the judicial ruling and its effect on freedom of expression in Lebanon by saying:

“It ( freedom of expression) was enshrined in the constitution and the Universal Declaration of Human Rights, whose preamble was devised by Dr. Charles Malek of Lebanon during his chairmanship of the U.N. General Assembly in 1948,” the patriarch said in his Sunday’s Mass sermon.

“We very much regret yesterday’s judicial ruling which banned a diplomatic figure representing a world power from the right to express opinions,” the cardinal who is the highest Christian authority in Lebanon added.