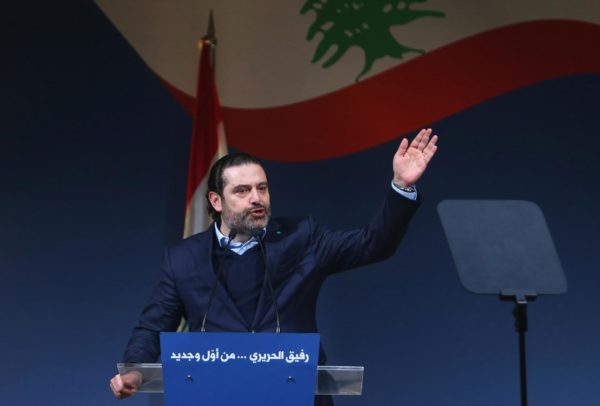 BEIRUT (AP) — A missile exploded earlier this month near the convoy of former Lebanese Prime Minister Saad Hariri while he visited a mountainous area in the eastern Bekaa Valley, a Saudi-owned TV station reported Sunday.

Hariri’s office in a statement said most of the report carried by Al-Hadath TV station was “generally correct.” The blast reportedly occurred some 500 meters (yards) away from Hariri’s motorcade on June 17.

Hariri was returning from a visit to the top Sunni cleric in the Bekaa valley, days after sectarian tensions and rare clashes in Beirut sparked by Lebanon’s ongoing economic and financial crisis, the worst in decades.

Hariri, himself a Sunni Muslim, had resigned in late October following nationwide protests against the country’s ruling elite, who demonstrators blame for decades of corruption and mismanagement.

Al-Hadath TV reported that the explosion occurred as Hariri’s convoy of some 30 vehicles was returning to Beirut after the meeting with sheikh Khalil al-Mais in the eastern village of Makseh.

The report said security forces searched the area and found the remains of a missile. It added that an investigation was underway to determine whether the missile was fired from a drone or from the ground, as well as to determine the type of missile.

Three Lebanese security and military officials did not immediately respond to requests for comment about the incident from The Associated Press.

Hariri’s office said the former prime minister was informed by security services of an explosion in the area on the same day. But because “the convoy was not subjected to any attack, and to prevent any exploitation in light of the prevailing tension,” Hariri decided to remain silent about the incident and wait for the investigation to end.

Lebanon’s national police said in a statement late Sunday that during Hariri’s visit to the Bekaa, a person told security forces they had witnessed an object crash into the ground and explode. The police opened a secret investigation into the incident, adding that Hariri’s convoy was not directly attacked.

Hariri typically moves around Lebanon amid tight security measures. His father, former Prime Minister Rafik Hariri, was assassinated on Feb. 14, 2005 in a massive truck bomb on a seaside road in Beirut that killed 21 others.

A U.N.-backed tribunal has indicted members of the militant Hezbollah group of being behind Rafik Hariri’s assassination. Hezbollah denies the accusation.