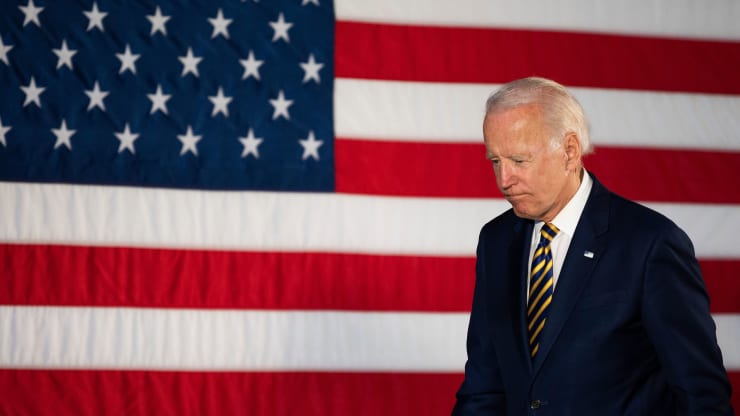 Joe Biden has accused Donald Trump of betraying his duty as president, after a report claimed the White House knew for months Russian intelligence offered Afghan militants bounties to kill U.S. soldiers but did not punish Moscow.

“His entire presidency has been a gift to Putin, but this is beyond the pale,” Biden said during a virtual town hall Saturday. “It’s betrayal of the most sacred duty we bear as a nation to protect and equip our troops when we send them into harm’s way. It’s a betrayal of every single American family with a loved one serving in Afghanistan or anywhere overseas.”

Trump was briefed on the intelligence and the White House National Security Council discussed the findings at a meeting in late March, according to the Times, which cited officials briefed on the matter. Officials developed options from a diplomatic complaint to sanctions, but the White House has not yet authorized a response, the Times reported, citing the officials.

The Wall Street Journal also reported Saturday that a Russian spy unit paid militants in Afghanistan to attack U.S. troops, citing people familiar with classified American intelligence. The assessment was delivered to the White House earlier this spring, a person familiar with the intel told the Journal.

The White House on Saturday denied that Trump and Vice President Mike Pence were briefed on the matter, but did not dispute the validity of the intelligence as described in the New York Times’ report.

“The United States receives thousands of intelligence reports a day and they are subject to strict scrutiny,” White House press secretary Kayleigh McEnany said. “While the White House does not routinely comment on alleged intelligence or internal deliberations, the CIA Director, National Security Advisor, and the Chief of Staff can all confirm that neither the president nor the vice president were briefed on the alleged Russian bounty intelligence.”

“This does not speak to the merit of the alleged intelligence but to the inaccuracy of the New York Times story erroneously suggesting that President Trump was briefed on this matter,” she added.

The Trump administration reached a deal with the Taliban in February to reduce its troop presence and established a cease-fire, with the goal of completely withdrawing from Afghanistan in 14 months.

Biden, the former vice president and presumptive Democratic presidential nominee, slammed Trump for inviting Russia to join a summit meeting of seven world powers, known as the G-7, in Washington this September after allegedly being briefed on the plot to kill U.S. soldiers. Russia was kicked out of the group in 2014 after annexing Crimea from Ukraine.

“President Trump, the commander in chief of American troops serving in a dangerous theater of war, has known about this for months according to the Times and done worse than nothing,” Biden said.

“Not only has he failed to sanction or impose any kind of consequences on Russia for this egregious violation of international law, Donald Trump has continued his embarrassing campaign of deference and debasing himself before Vladimir Putin,” Biden continued. “He has had this information according to the Times and yet he offered to host Putin in the United States and sought to invite Russia to rejoin the G7.”

The top Republican on the House Foreign Affairs Committee, Rep. Michael McCaul, said he immediately reached out to the Trump administration after reading the New York Times’ report and “will be talking with them in the very near future.”

“If accurate, the administration must take swift and serious action to hold the Putin regime accountable,” McCaul said. The Texas congressman said the report deepens his concerns about the Russian government’s “malicious behavior globally.”

“From invading Ukraine, propping up dictators around the world and interfering in U.S. and European elections, the Putin regime has shown time and again it cannot be trusted and is not our friend,” McCaul said.

Biden said he took the report personally as the father of a soldier who served in a war zone. His son Beau, who died of brain cancer in 2015, deployed to Iraq in 2008 with the Army National Guard.