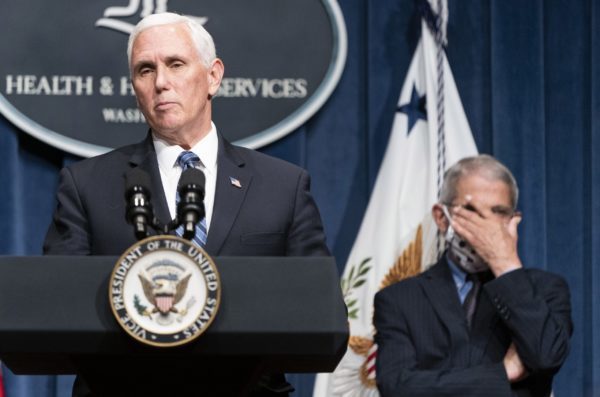 At a White House coronavirus task force briefing Friday – the group’s first in nearly two months – a reporter asked Pence why the campaign forged ahead with the rallies, which have drawn tens of thousands of President Donald Trump’s supporters in the past.

“The freedom of speech, the right to peaceably assemble, is enshrined in the constitution of the United States,” replied Pence, who leads the task force.

“And we have an election coming up this fall,” he added. “We still want to give people the freedom to participate in the political process, and we respect that.”

Another reporter grilled Pence for justifying the public gatherings while insisting that people follow state and local social distancing guidelines.

“Even in a health crisis, the American people don’t forfeit our constitutional rights,” Pence said. “I think it’s really important that we recognize how important freedom and personal responsibility to this entire equation.

—@PaulaReidCBS to Pence: "It really does sound like you're saying, 'Do as we say, not as we do.' You're telling people to listen to local officials, but in Tulsa you defied local health officials…How can you say that the campaign is not part of the problem?" pic.twitter.com/96dkjow28L

Pence said that he and Trump believed in “taking proper steps” in their approach to hosting rallies amid the pandemic. At the most recent rally in Oklahoma over the weekend, attendees received masks, hand sanitizer and temperature checks before entering the Tulsa arena where Trump spoke. But wearing the masks was not mandatory.

The vice president noted that attendees were screened at recent events, and added that Oklahoma’s positivity rate for Covid-19 cases appears to be on the decline as of Friday. “That’s a great testament to the fact that people are using common sense, they’re being responsible.”

While Trump had regularly held rallies throughout his 2016 election bid and during much of his first term in office, the campaign suspended rallies for more than three months as the pandemic spread throughout the United States.

Presumptive Democratic nominee Joe Biden has also been off the campaign trail, appearing mostly during virtual events and interviews. Despite his physical absence, Biden has surged ahead of Trump in general election polls.

The Trump campaign’s reboot in Tulsa yielded as much controversy as it did exposure to his reelection pitch, with top health officials in the area recommending the event be postponed. Turnout at the 19,000-capacity convention center also fell well below the hype that the campaign had built up, marring the enthusiastic image the president’s reelection team was hoping to convey.

On Tuesday, Trump spoke to a packed megachurch in Phoenix, Arizona.

The president has regularly claimed that America has been more effective in combating the virus than any other country, even though the U.S. has reported the highest numbers of cases and deaths from Covid-19. During a speech in Marinette, Wisconsin, on Thursday, Trump once again claimed that the U.S. is seeing an increase in coronavirus cases because it is testing more extensively than other nations.

More than 2.4 million coronavirus cases and at least 124,468 deaths have been confirmed in the U.S., according to Johns Hopkins University data.

Pence, who as recently as last week had assured Americans that the “panic” over a so-called second wave of the virus was “overblown,” admitted at the briefing Friday that “we now have seen cases rise precipitously across the South.”

“If there’s one message that comes through today I hope it is saying to younger Americans in these states, and in these counties in particular, that they are a big part of the numbers that we are seeing in new cases,” Pence said.

Dr. Anthony Fauci, director of the National Institute of Allergy and Infectious Diseases, recently said that the U.S. is still in the first wave of the pandemic.

Pence told reporters it was “encouraging” to see that roughly half of the new infections reported are in people under 35 years old, as that age group is less likely to be seriously harmed or killed by the virus than older demographics.

But Fauci warned that young people can still spread the disease to more at-risk populations.

“People are infecting other people and ultimately you will infect someone who’s vulnerable,” Fauci said at the briefing.