Washington,D.C. Will Be a State, Sooner Rather Than Later 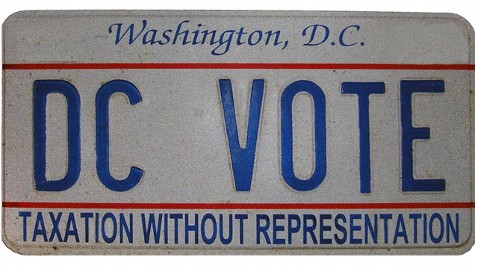 The motorcade for President Obama’s Inaugural Parade for his second term featured a shout-out to Washington, D.C., voting rights advocates.. He equipped his limos with license plates reading “Taxation Without Representation,” a reference to D.C.’s lack of a proxy in the House of Representatives and the Senate.
Share:

The Democrats used to be split on the issue. No more.

The House of Representatives is scheduled to vote Friday on statehood for Washington, D.C. They’re doing this, as is clearly allowed by the Constitution, as simple legislation: The bill would shrink the constitutionally mandated federal district to include just the federal government buildings and monuments, while putting all the district’s residents into the 51st state.

It’s a good idea. While it won’t happen this year, the chances of its happening the next time Democrats have unified control of government are now pretty high.

Why do I say that? In practical terms, statehood for the district — which is overwhelmingly Democratic — has become almost completely a partisan fight. Democrats want the two extra senators they would surely get; Republicans oppose it.   It wasn’t always the case that Democrats saw D.C. statehood in terms of party advantage. The last time statehood got a vote, in 1993, the Democrats split (all but one Republican opposed it).

Several things have changed since then. Both parties are now more likely to see everything in terms of future party advantage. And on the Democratic side, it matters that Black party actors in addition to Black voters have become a more important part of the party’s coalition. There’s a good chance the district’s senators would be Black, and the party collectively is more comfortable showing itself as truly diverse.

It also helps within the Democratic Party that at a time when Black protesters are demanding progress in many difficult policy areas, statehood for Washington would also serve as an easy symbolic gain. That’s not to say it’s only symbolic, but to the extent that it is, the issue can be fully resolved with no complicating consequences. (As opposed to, say, fundamentally restructuring local policing.)

Combine all those things, and the question of D.C. statehood has moved from being a marginal policy question to a fairly high-ranking item on the Democratic Party agenda. That explains the House vote on Friday, and signals that Democrats will almost certainly try to make this happen once they regain control of Congress and the White House, whenever that happens.

The big obstacle in that case will be a Senate filibuster by Republicans seeking to block it. Yet as the Democrats’ chances of winning the presidential election and possibly gaining a Senate majority in addition to the House have been increasing, so have the odds that they will move to eliminate the legislative filibuster.

It wouldn’t be the D.C. statehood issue that would prompt 50 Democratic senators to go nuclear and end the filibuster — the number necessary for that to happen — even if there are as many as 55 Democrats after a hypothetical landslide. The likely impetus for that to happen, as Scott Lemieux points out, is that Democrats may enter the White House and establish a Senate majority at a time when the economy is in serious trouble and with Republicans blocking any stimulus.

It would take 60 votes in support of the stimulus to stop the filibuster, and it would be hard to see any Republicans breaking ranks to reach that number or be willing to reach a compromise. After all, Republicans right now are ambivalent about any further economic relief even though they are the party that would benefit from it in the coming elections.

In 1993, with the economy improving anyway, the Democratic majority in the Senate was willing to allow a Republican filibuster to defeat a stimulus measure. In 2009, Democrats had a large enough Senate majority that they were able to pass a huge stimulus bill with minimal Republican help. In 2021, if they have regained that majority, they likely won’t get to the filibuster-proof 60 votes nor are they likely to accept the derailing of their entire legislative agenda. Given those circumstances, the filibuster is likely dead. And once it’s dead, D.C. statehood needs only a simple majority. 2

Looking away from the partisanship for a minute, no legitimate justification exists for disenfranchising some 700,000 U.S. citizens who live in Washington.  The framers of the Constitution just got this one wrong in giving Congress the power to “exercise exclusive Legislation in all Cases whatsoever, over such District (not exceeding ten Miles square)” set up as the “Seat of the Government of the United States.”

They likely didn’t even consider the possibility that hundreds of thousands of Americans might live in such a district, most of whom having nothing whatsoever to do with the federal government. After all, the entire concept of an extended republic — a democracy larger than a city-state — was something they were basically inventing from scratch. At any rate, people who live in Washington are as entitled to self-government and representation in Congress as those in New York or Texas or Alaska.

The question (again, leaving partisanship aside) is whether D.C. should be a separate state or returned to Maryland. Both options are better than the status quo, but statehood has some real advantages. Washington is certainly large enough to be a state. It would join six current states with fewer than a million residents, more populous than Wyoming and Vermont and a bit smaller than Alaska and North Dakota. As for being geographically tiny? That’s a feature, not a bug.

The U.S. Senate is currently heavily biased against cities. Wyoming gets two senators for fewer than 600,000 residents. Houston, San Antonio, Dallas, Austin, Fort Worth and El Paso, each with more people than all of Wyoming, have to share their two senators with one another and millions of other Texans. Though there’s no legitimate reason at all for the malapportionment of the Senate, we’re basically stuck with it.

Making one good-sized city a state wouldn’t even the score, but it would balance things at least a little bit. Perhaps in the long run it would even push Republicans to care a bit more about cities, just as Democrats don’t completely ignore rural areas, even if they can’t win there.

Again, I don’t expect this fight to be won or lost on the merits. This will eventually be a partisan decision, just as the creation of many states (two Dakotas?) were partisan acts of, essentially, gerrymandering the Senate. But on the merits, D.C. statehood is a good idea.

Jonathan Bernstein is a Bloomberg Opinion columnist covering politics and policy. He taught political science at the University of Texas at San Antonio and DePauw University and wrote A Plain Blog About Politics