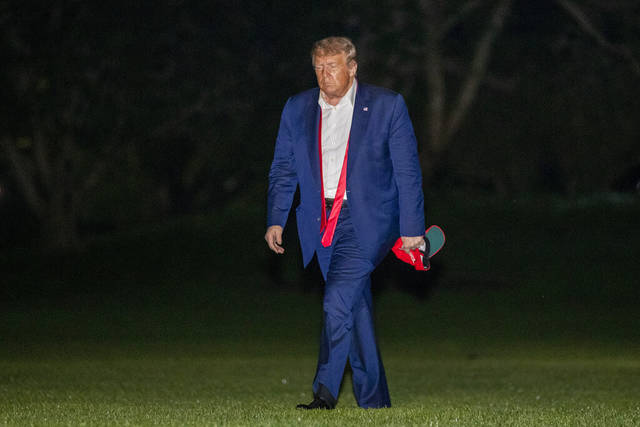 President Donald Trump is shown on the south lawn of the White House in Washington early Sunday as he returns from his first campaign rally since the coronavirus pandemic swept the United States . The rally will be remembered more for what the president would rather forget, as his attempt to reset his re-election bid drew a disappointing crowd in a safe state.
Share:

President Donald Trump’s erratic performance in office and his deteriorating standing in the polls is posing a grave threat to his party’s Senate majority, imperiling incumbents in crucial swing states and undermining Republican prospects in one of the few states they had hoped to gain a seat, according to a new poll of registered voters by The New York Times and Siena College.

Sen. Martha McSally of Arizona, a Republican, trails her Democratic opponent, Mark Kelly, by 9 percentage points while Sen. Thom Tillis of North Carolina is behind his Democratic rival, Cal Cunningham, by three. Both incumbents are polling below 40% despite having recently aired a barrage of television advertisements.

In Michigan, which Senate Republicans viewed as one of their few opportunities to go on the offensive this year, Sen. Gary Peters, a first-term Democrat, is up by 10 percentage points over John James, who is one of the GOP’s most prized recruits.

The poll showed that the same voters who are fleeing the president — highly educated white Americans, many of them once-reliable Republicans — are providing an advantage to Democratic Senate candidates. Trump’s mismanagement of the coronavirus and his bombastic response to protests over racial justice have made him an underdog against Joe Biden, the presumptive Democratic nominee, who led the president by 14 percentage points nationally in the Times poll.

And in an era when Senate races increasingly mirror the presidential preference of a given state, there is little McSally and Tillis may be able to do to overcome Trump’s current drag on their party. The president trails Biden by 7 percentage points in Arizona and nine in North Carolina. Trump is capturing the support of only 41% of Arizona voters and 40% of North Carolinians.

The president’s prospects are even more dire in Michigan, where the poll shows he is losing to Biden by 11 points, capturing just 36% of the vote in a state he narrowly carried four years ago.

Taken together, the three battleground states paint a grim picture for Republicans right now — and suggest that if Trump does not arrest his fall he could hand Democrats control of both the presidency and the Senate next year.

“The election is a referendum on Trump,” said Kirk Adams, a Republican and former Arizona state House speaker. “That could change, but until then, down-ballot Republicans will have to decide if they will ride the Trump train to its final destination or if they need to establish some brand independence.”

Jill Cohen, a 52-year-old resident of Tempe, Arizona, who was a Republican until 2016, said she would have a difficult time supporting a Senate candidate who “aligns herself” with Trump and his views. “I look to a leader of our country to be someone who is unifying, who is welcoming, who is inclusive and who I can tell my children to look up to,” she said. Trump, she added, “is not any of those things.”

She said she longed for more consensus-oriented lawmakers and would vote for Kelly. “I really like Kyrsten Sinema for that reason because she is willing to go across the aisle and work bipartisan,” she said, referring to Arizona’s other senator. “And I think Kelly would, too.”

The margin of sampling error in the Times/Siena survey for the individual state polls in Arizona, Michigan and North Carolina is about 4 percentage points.

The Times survey of battleground states is not the only recent polling that illustrates how the president’s unpopularity is endangering his party’s candidates. A recent Des Moines Register poll in Iowa — which found Trump up by just 1 percentage point in a state he carried by about 10 in 2016 — showed Sen. Joni Ernst trailing by 3 points against Theresa Greenfield, a first-time candidate.

Republicans have a 53-47 Senate majority. A pickup of three seats would give Democrats control, if Biden wins and his vice president is able to break a 50-50 tie. But if Doug Jones of Alabama, a rare Democratic senator in the Deep South, loses his reelection in a state that Trump is expected to comfortably carry, Democrats would need to net four seats to take control.

Yet with Republicans defending a number of competitive seats this year, the majority is now clearly within reach for Democrats. In addition to Arizona, North Carolina and Iowa, Republicans have vulnerable incumbents in Colorado and Maine, two states that Biden is favored to win.

Republicans could still limit the Democrats’ opportunities to pick up seats, especially if Trump stabilizes his standing. There are a considerable number of undecided voters in these Senate races, particularly in Michigan and North Carolina where Peters and Tillis, who’s also in his first term, are not well known.

However, by aligning themselves so closely with Trump, Senate Republicans now risk the same fate that could await the president without a drastic change in fortune.

“I really resent when I see in the newspaper that Trump is supported by all these Republicans,” said Fern Fousse, an 84-year-old Tucson, Arizona, resident who said she would vote for a Democrat for president for the first time this year. “Well, I’m a Republican! I have a voice! And I am not a Trump Republican.”

McSally, who was appointed last year to the seat previously held by the late Sen. John McCain, “became a Trump lackey,” Fousse continued. “I would have never thought that of her.”

Fousse said she had also become disillusioned with McSally after watching her unsuccessful Senate campaign in 2018.

“Martha McSally’s campaign has been so negative,” Fousse said. “Mark Kelly sounds like a nice person, a winner and someone who can work with both parties.”

Trump’s precipitous drop in these battleground states owes largely to his decline among voters who, like Fousse, who were once staunch Republicans.

The president has sagged among white voters, especially those who are younger and those who have college degrees. He has received especially poor marks from this slice of the electorate for his handling of the coronavirus pandemic and his response to the protests against racial injustice.

His divisive conduct has, in turn, soured voters on his party’s other candidates. Michael Maddox, a 60-year-old teacher from Fayetteville, North Carolina, said he had been disturbed by Trump’s stated desire to slow coronavirus testing and by his use of racist language, describing the pandemic as “Kung Flu.”

“We’ve gotta get him out of there,” Maddox said, “and I think one of the ways to help do that is to try to remove some of the folks who support his agenda.”

Maddox said he has been unnerved by what he said was Tillis’ “silence” in the face of these and other remarks by Trump.

It’s voters like Maddox and Cohen, the Tempe resident, both of whom have college degrees, who are imperiling Senate Republicans.

In Arizona, Kelly leads McSally 49 to 39 among voters with a college degree. In North Carolina, Cunningham is up 52 to 29 with the same voters. And Peters also enjoys a comfortable margin among college-educated voters, leading James 47 to 29.

Like Trump, the Republican Senate candidates are also struggling to appeal to voters under 45.

Their challenge, therefore, is how to win over some Biden voters without angering the president’s most ardent supporters.

The composition of the undecided voters in the Times-Siena survey illustrates how tricky that can be because they largely lean to the right but are uneasy with Trump.

If Senate Republicans try to woo these voters by distancing themselves from the president, they risk incurring his volcanic wrath and driving away his most loyal voters, in the fashion of a handful of congressional candidates who lost in 2016. “It’s a difficult needle to thread and requires astute political maneuvering to hold the Trump voter and attract the swing voter,” Adams, the former Arizona speaker, noted.

Liesl Hickey, a Republican strategist, said her party’s Senate candidates have little choice but to try to localize the races and to make them about themselves and their opponents rather than Trump.

“These senators have strong brands and have worked hard for their states so they should run on delivering for their constituents,” said Hickey, adding, “What else can they do?”

Some of the Republicans are doing just this by taking the unusual step of calling for a series of debates, a tactic incumbents turn to only in times of peril because they don’t want to hand attention to lesser-known opponents.

Yet for voters who are eager to register their opposition against Trump in every conceivable way, such ploys may have little impact.

In Michigan, Republicans had hoped that James, a 39-year-old African American former Army helicopter pilot, could appeal to white and Black voters alike. But despite having run for the Senate two years ago, he’s drawing scant support among African Americans in the poll.

Brooks Welch, 21, a college student from outside Grand Rapids, Michigan, said the president had empowered racists and people who want to do harm to Black people. So when it comes to her vote in the Senate race, she said her criteria was simple and straightforward: “I want to just support someone who is actively against the policies that Trump has.”