Dispute over the losses , blocking an IMF deal for Lebanon. A plan B may be needed 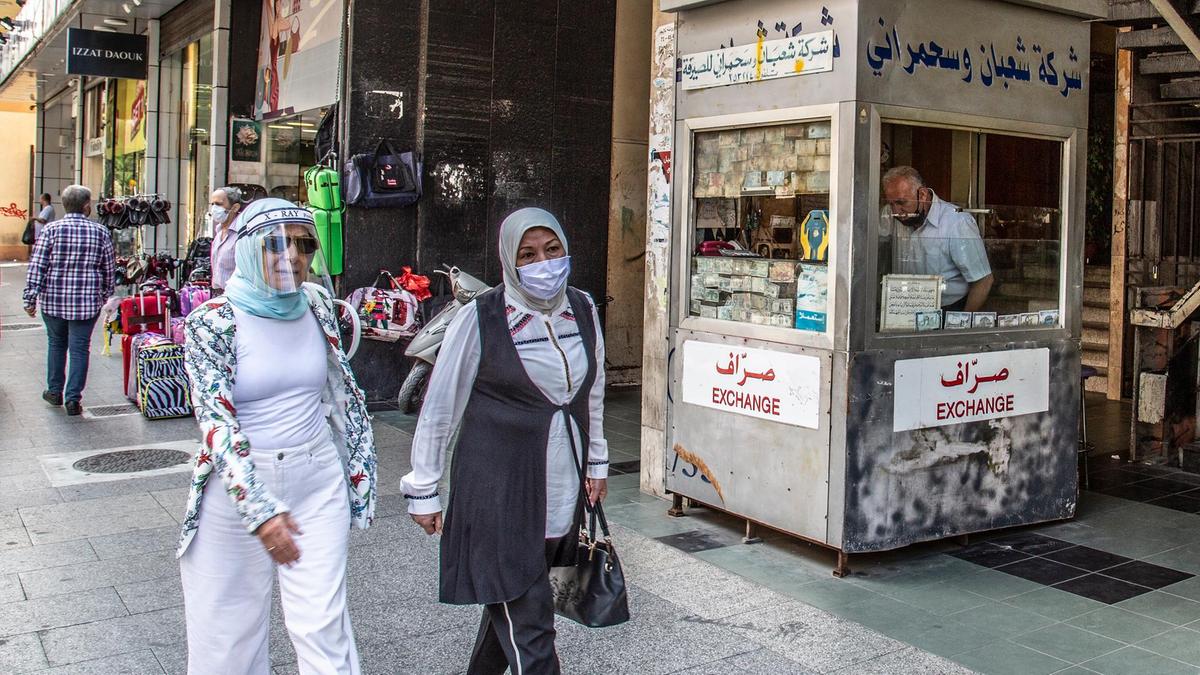 People pass by a currency exchange outlet in Beirut. Lebanon’s private sector economy continued to contract in May as business conditioned worsened and inflation surged as result of the collapse of the Lebanese currency
Share:

Less than two months into Lebanon’s bail-out discussions with the International Monetary Fund, talk is turning to the need for a Plan B.

Lebanon’s economy has been in freefall since October, when anti-government protests accelerated a financial crisis years in the making. As confidence fell, dollar inflows dried up and the currency plummeted, the government was forced to default on its foreign debt and turn to the IMF for a $10 billion loan to help it overhaul its devastated economy.

Its negotiating team has held 15 sessions with the Washington-based lender, but has yet to progress beyond the first phase as banks, the central bank and the government can’t agree on the scale of the losses and who should foot the bill, let alone the painful reforms that will eventually be required to clinch a deal.

The divisions prompted Henri Chaoul, an adviser to the Finance Ministry, to quit last week after a few months in the job and accuse the political class of colluding with lenders to “torpedo” a deal that would require them to pay the price for bankrupting the state.

The government plan estimates total losses incurred by the government, banks and central bank at $69 billion —  three times the total economic output projected for this year. It envisages plugging some of that hole with debt haircuts that would wipe out lenders’ capital and require a shareholder bail-in, but protect most depositors. Lebanon’s decision to recognize the size of its problem was key to persuading the IMF it was serious about making changes international donors had demanded for years, said two government officials.

But the banks had other ideas. The Association of Banks in Lebanon slammed the government plan as “highly damaging” and argued that there was no need to default on the local component of the debt at all —  just reschedule T-Bills held by lenders and swap the central bank’s paper for long-dated securities backed by $40 billion in state assets.

Governor Riad Salameh maintains that there’s no loss on the central bank’s balance sheet in the first place since longer-term dues can be amortized by printing money  — effectively forcing savers and wage-earners to shoulder losses through inflation and a collapsing currency. In fact, after revaluing gold and other adjustments, he calculates a $14 billion surplus, while foreign currency liabilities are shifted to the banks, according to a document seen by Bloomberg.

With the blame-game dominating the headlines, parliament’s finance committee launched an inquiry, working with banks, Salameh and others to come up with reduced loss calculations likely to total closer to $33 billion, though the numbers have yet to be finalized.

“What they’re doing, in typical Lebanese fashion, is hiding the losses, minimizing them and keeping them locked in the financial system as a result,” Chaoul told Bloomberg. “The IMF is not only about money. It’s about introducing discipline and transparency and implementing reforms which the political class has shown over the past 30 years that they’re incapable of doing. They really don’t want to do it because the moment you do that you strip them of power.”

The government’s pushing ahead but one official with knowledge of the discussions said its plan was now a “political orphan”, unlikely to survive. Another said the government would have to consolidate the numbers to win the backing of parliament for any eventual IMF deal and to pass the associated reforms. Though discussions are still in early stages, diplomats and officials are increasingly pessimistic, talking of a loan closer to $3-4 billion, if any agreement is reached at all.

The IMF has called the talks constructive but its spokesman, Gerry Rice, reiterated in a tweet Friday that its own estimates “are broadly consistent with those in the government’s plan. Solutions should be swift, efficient, equitable, and long-lasting.”

Yassine Jaber, a member of parliament’s finance committee, defended its role in bringing bickering sides together and said the government should have sought consensus before starting IMF talks.

“The figures can be reconciled,” he said. “The real issue when it comes to a deal is reform. The lack of willingness to reform is what’s undermining the process.”

Diplomats said the international community wants to help, but needs evidence that politicians are ready to implement key changes including overhauling an electricity sector that costs the state $2 billion a year, regulating public procurement and boosting judicial independence. The signs, so far, aren’t encouraging.

Bowing to political pressure, the government endorsed in recent weeks a plan to build three power plants after initially deciding to go for only two. Recent appointments to the central bank, judiciary and other government jobs revealed that sectarian quota systems and patronage networks remained intact. A public procurement law is still in the works. Another on capital controls, informally in place since October, has stalled over how to incorporate IMF recommendations. Politicians still benefit from banking secrecy.

Meanwhile, the currency is collapsing, approaching 7,000 per dollar on the black market versus an official rate of 1,507. Businesses are closing. More than half the population will be classified poor by the end of 2020 as unemployment rises, wages fall and prices soar. Without international support, economists warn Lebanon is headed toward long-term decline and social upheaval. Bouts of rioting and attacks on banks have become common. Porsches still fill the streets, relics of a financial strategy that allowed Lebanese to live for years beyond their means, but roads are potholed, street lights broken and children beg on corners.

The road to the IMF was never going to be smooth for Lebanon, which diplomats say squandered international sympathy by repeatedly taking aid while allowing vested interests to become so entrenched that the state could no longer provide electricity let alone invest in schools or health.

Emerging in 1990 from a 15-year civil war, Lebanon borrowed to rebuild, betting on tourism, real estate and investment from Gulf oil-exporters and its sizeable expatriate population to keep hard currency flowing and maintain a dollar peg that was established in 1997.

Lebanon became increasingly reliant on imports effectively subsidized through the peg. By the time anti-government protests erupted on Oct. 17, decades of mismanagement and corruption had created a debt pile worth more than 170% of GDP and double-digit deficits in the budget and current account.

With the country paralyzed by political crises and inflows falling, the central bank embarked in 2016 on “financial engineering”, introducing higher yields and complex swap operations to attract dollars. Within three years, more than half of bank assets were parked at the central bank, which used them to finance a profligate government.

Salameh, and the banks, say they had a moral obligation to help the state cover salaries and avoid default though economists warned that the mechanism built systemic risks as the balance sheets of the central bank, the lenders and the government became increasingly intertwined.

Amid the bickering, some are calling for Lebanon to look elsewhere.

Hezbollah leader Hassan Nasrallah has suggested “turning east”, engaging in  barter deals with Iran that bypass the dollar but are nevertheless complicated by U.S. sanctions.

Nasrallah also proposed turning to China for investment, suggesting it was ready to build a railway.

The idea drew ridicule from economists who said Chinese investment would come with its own strings. A statement from the Chinese embassy clarified that it was open to cooperation based on mutual benefit.

Economists, officials and diplomats have warned that without the IMF’s stamp of approval, Lebanon will struggle to secure other aid or return to debt markets. In its plan, the government draws a bleak scenario for adjustment without aid, raising the specter of a Venezuela-style collapse into shortages and hyperinflation.

“Do people realize that without the IMF funding and its contribution to restoring confidence in the country we are heading south not east? ” Jean Riachi, Chairman of FFA private bank, wrote on Twitter. “Do they understand what going east really means?