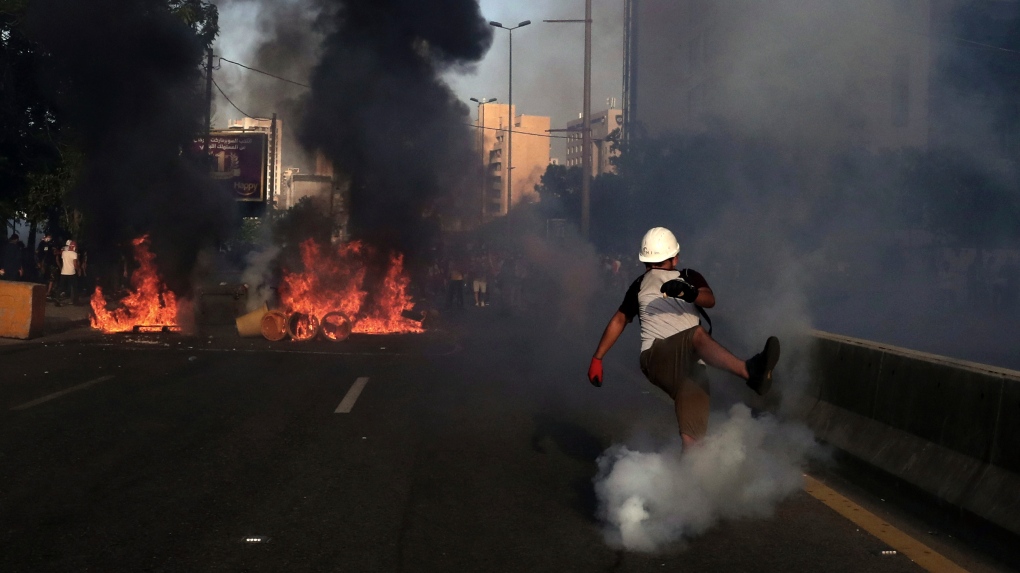 An anti-government protester kicks a tear gas canister that was fired towards them by riot police, as others burn tires and garbage containers block a main road, during ongoing protests against the Lebanese government, in Beirut, Lebanon, Saturday, June 6, 2020. (AP Photo/Bilal Hussein)
Share:

BEIRUT (AP) — Lebanese protesters took to the streets in Beirut and other cities Saturday in mostly peaceful protests against the government, calling for its resignation as the small country sinks deeper into economic distress.

The protests come after two days of rallies spurred by a dramatic collapse of the local currency against the dollar. Those rallies degenerated into violence, including attacks on private banks and shops.

The local currency, pegged to the dollar for nearly 30 years, has been on a downward trajectory for weeks, losing over 70% of its value. But the dramatic collapse this week deepened public despair over the already troubled economy. Lebanon is heavily dependent on imports, and the dollar and local currency have been used interchangeably for years.

The unparalleled economic and financial crises are proving a major challenge to the government of Prime Minister Hassan Diab, who took office earlier this year after his predecessor resigned amid nationwide protests. Soon after taking office, Diab was faced with handling the coronavirus pandemic, which put the country in lockdown for months, further compounding the crisis.

Diab’s government is supported by the powerful militant group Hezbollah and its allies, but has already been weakened by the economic crisis.

In a speech Saturday, Diab urged the public to be patient, saying there were a great many political hurdles, including from rivals he said sought to undermine his government. Diab offered no solutions to the crisis, nor did he name his opponents, but said his government is working to fight corruption and uphold the power of the state.

For the protesters Saturday, many of them members of organized political parties, Diab’s government has failed to handle the crisis.

Neemat Badreddin, a political activist, described the government as captive to the interests of political groups and not the public.

“This current government proved to be a failure,” said Badreddin, wearing a face mask featuring the Lebanese flag with its green cedar tree in the center. “We want a new government … we want stability and we want to be able to live without begging or without people having to migrate.”

Protesters in Beirut carried a banner that read “There is an alternative.”

In the southern city of Sidon, some directed their wrath at the central bank governor. One protester raised a banner called him the “protector of all thieves in Lebanon.”

In the northern city of Tripoli, army troops forcefully dispersed dozens of protesters who had blocked the road preventing trucks from moving forward, according to videos posted online. The protesters allege the trucks were smuggling goods to Syria — a common complaint in Lebanon as the neighboring country grapples with its own economic hardships. Later, Lebanon’s customs authorities said in a statement that the trucks were transporting U.N. aid destined to Syria.

After an emergency Cabinet meeting Friday to address the crisis, the government announced that the central bank would inject fresh dollars into the market to prop up the Lebanese pound — a measure that many say is likely to offer only temporary relief.

The dollar shortage, coupled with already negative economic growth, has crunched Lebanon’s middle class and increased poverty in the small Mediterranean nation of over five million that’s home to over 1 million Syrian refugees.

The heavily indebted government has been in talks for weeks with the International Monetary Fund after it asked for a financial rescue plan but there are no signs of an imminent deal.