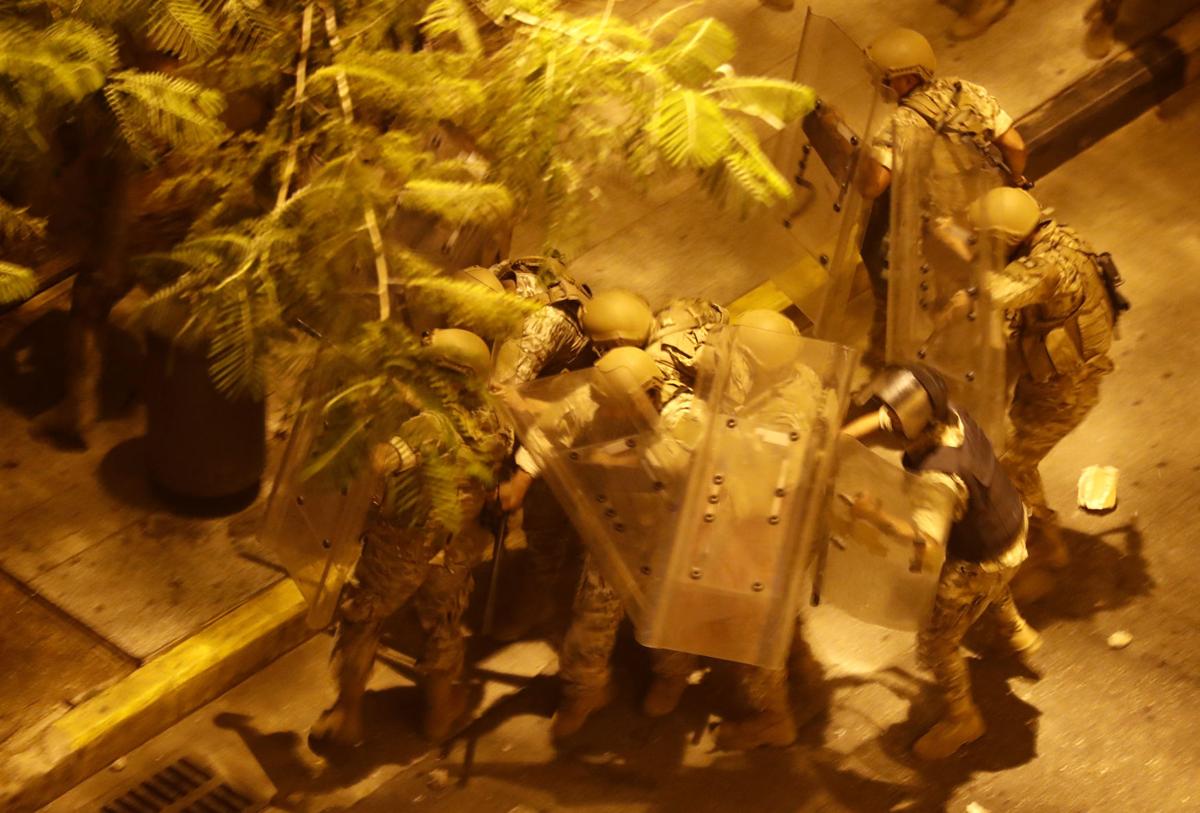 Hussein Malla Lebanese army soldiers cover themselves as they step back after the anti-government protesters storm them with stones, during a protest against the political leadership they blame for the economic and financial crisis, in downtown Beirut, Lebanon, early Friday, June 12, 2020.
Share:

BEIRUT- Lebanese Prime Minister Hassan Diab accused his opponents on Saturday of deepening a currency crisis and fuelling unrest as the country entered a third day of protests sparked by a sharp drop in the Lebanese pound.

Protests broke out on Thursday after the currency plunged to new lows over the past week, with rising anger over the government’s inability to contain an economic crisis that has devastated living conditions.

The pound has lost some 70% of its value since October, when the debt-saddled country was plunged into a financial crisis that has hiked prices, slashed jobs, and brought on capital controls that have frozen people out of their dollar savings.

The currency, which had hit about 7,000 to the dollar on Wednesday , appeared to reverse its slide on Friday after a government announcement that the central bank would inject dollars into the market on Monday.

In a televised address on Saturday, Diab said political opponents looking to thwart government efforts to investigate and crack down on corruption were stirring the latest unrest.

“Some have tried to exploit the situation again…They have thrown lies and rumours, have contributed to deepening the Lebanese pound crisis, have caused a major crisis and have pushed people onto the streets,” Diab said.

Diab, who took office in January with the backing of the powerful Iran-aligned Hezbollah, did not name the opponents.

Protesters returned to streets across Lebanon on Saturday, with demonstrations in Beirut, the northern city of Tripoli, and Sidon in the south, expressing outrage over the deteriorating conditions and many calling on the government to resign.

The renewed unrest could complicate Beirut’s ongoing talks with the International Monetary Fund over a reform programme it hopes will secure billions in financing and kickstart a recovery.

According to MP Jamil el Sayyed , a former security chief who represents Hezbollah in the parliament the reason the Lira saw its worst day so far was because of the demand for the US dollar . He claims that 5 Lebanese banks were offering to buy $50, 000 cash against a certified bank check of $110,000 or at the rate of 2.2 to 1 ( not much confidence in Lebanese banks anymore ) . He also claims that Central bank governor Riad Salameh is fully aware of that. The story could not be confirmed but was widely reported in the Lebanese media . Sayyed was one of the suspects in the murder of former PM Rafik Hariri . He spent 4 years in jail and was released for insufficient evidence