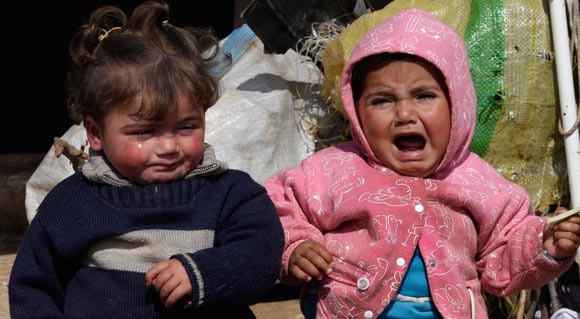 With the war in Syria now into its tenth year, day to day life for civilians becomes more horrifying and desperate by the day. The collapse of the Syrian pound and subsequent hyper inflation made life a lot more miserable for the people . When the civil war started a US dollar was worth 47 Syrian Pounds but now it is worth over 3000 Syrian Pounds on the black market
Share:

Umm Ahmed and her family have survived years of war, but now the mother of five is terrified uncontrolled devaluation of the Syrian pound will prevent her from feeding her children.

“Since the war started, we’ve tasted all sorts of suffering,” said the 39-year-old, displaced three times by fighting in the rebel stronghold of Idlib.

“I think hunger will be among the next.”

The value of the Syrian pound has plummeted with dizzying speed in recent days on the informal market, sending prices skyrocketing, shuttering shops, and sparking unprecedented protests.

Umm Ahmed said she was so alarmed she was considering buying flour in bulk to start hoarding supplies.

“If the pound continues to collapse like this, we are facing a huge famine,” said Umm Ahmed, who is relying on dwindling savings as her husband struggles to help with odd jobs.

“We sold some land we inherited and we have been living off that but I don’t think it will last long with these obscene price hikes,” she said in the town of Binnish.

In Idlib, the increase in the price of bread has sparked protests against Hayat Tahrir al-Sham jihadists in charge of the region of three million people — around half displaced by the conflict and many dependent on aid.

Some shops have closed, an AFP correspondent reported.

Syria’s economy has been battered by nine years of war, compounded by a financial crisis in neighbouring Lebanon, which had served as a conduit for dollars into government-held areas under international sanctions.

But in recent days the value of the Syrian pound on the black market has started to tumble even faster from one record to the next.

From Saturday to Monday alone, the exchange rate soared from 2,300 to more than 3,000 pounds to the dollar, more than four times the official rate of around 700. It hovered close to 3,000 on Wednesday.

Before the conflict, it stood at 47.

Analysts say the recent spike is likely due to worries ahead of the introduction of new US sanctions from June 15, and the sudden fall from grace of tycoon and cousin of the president, Rami Makhlouf, which has set other top businessmen on edge.

Prices have risen across the country, though the Turkish lira is used in some parts of the rebel-held north.

The government has blamed the unofficial devaluation on US sanctions, and “manipulation” of the exchange rate.

But the rapid deterioration has sparked unprecedented criticism in government-held areas, including in the southern city of Sweida, where dozens have demonstrated for three days since Sunday, boldly chanting against the president.

“Down with Bashar al-Assad,” a video carried by a local news outlet showed them chanting.

“Revolution, freedom, social justice,” they shouted in slogans reminiscent of the 2011 uprising whose repression sparked the civil war that has killed more than 380,000 people.

In the capital Damascus, one lawmaker said Sunday that part of the blame for the unofficial devaluation lay with the “wrong policies practised by the government”.

Another demanded action from the central bank, which increased the official exchange rate from 434 to 700 in March, but has since maintained that peg.

In Damascus, 52-year-old Lamees al-Sheikh said she had started buying only the cheapest vegetables.

“Prices are through the roof. Every day… it’s more expensive than the day before,” the mother of five told AFP by phone.

In a country where the vast majority lives in poverty, the World Food Programme says food prices have risen by 133 percent since May 2019.

In the Kurdish-held northeast, prices too are soaring.

Just a few customers looked for bargains in the Qamishli city market, and many shops had closed.

Sitting inside his empty grocery shop, Rashed Umari pored over his accounts.

“There is one exchange rate in the morning, and another one in the afternoon,” he said.

“Everything we sell is at a loss.”

Analyst Zaki Mehchy said that, without a political solution to the war, the devaluation would likely continue, leaving the government scrambling to control the damage.

It would probably use “security and coercive measures to control speculators”, and give more economic privileges to allies Russia and Iran hoping to secure desperately needed hard currency.

“The regime cannot allow further increases in prices as it knows that this will lead… to uncontrollable social unrest,” he said.