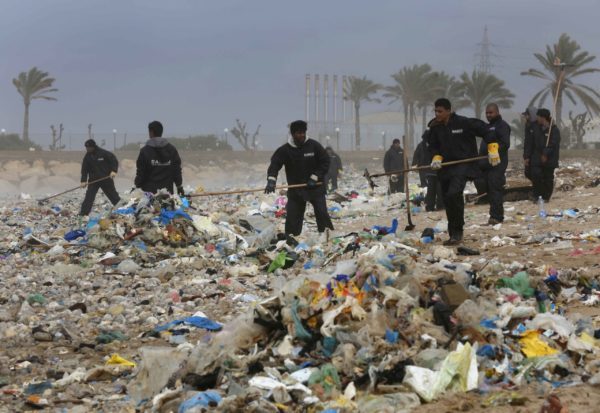 Workers clean a shore from garbage days after an extended storm battered the Mediterranean country, at the Zouq Mosbeh costal town, north of Beirut, Lebanon, Tuesday, Jan. 23, 2018. Lebanon’s festering trash crisis came crashing ashore this week, after residents woke up to find a powerful winter storm had laid a mantle of waste at a beach just a few minutes’ drive north of the capital, Beirut. Lebanon used to pride itself on its sparkling Mediterranean coastline, but its coastal landfills have polluted the sea with trash. (AP Photo/Hussein Malla)
Share:

(Beirut) – Lebanon’s lack of a comprehensive solid waste management strategy is incurring huge environmental and public health costs, the Waste Management Coalition and Human Rights Watch said today. Trash began piling up on the streets in Beirut and surrounding areas in scenes reminiscent of the 2015 trash crisis after the Borj Hammoud/Jdeideh landfill reached capacity on April 30, 2020 and stopped receiving waste.

On May 5, the Cabinet approved the vertical expansion of the landfill, one of two main landfills serving Beirut and surrounding areas, but only as a stopgap measure. Human Rights Watch warned last year that the landfill was reaching capacity and urged the government to adopt a more comprehensive solid waste management strategy that respects everyone’s right to health.

“Rights groups and environmental experts have been warning Lebanese decision-makers for years that Lebanon’s waste management practices are not sustainable,” said Aya Majzoub, Lebanon researcher at Human Rights Watch. “The costs of inaction are huge, and residents are being denied their right to health and a healthy environment every day this crisis goes unaddressed.”

The landfill’s expansion, which will extend its life expectancy for an additional three months, is broadly considered a stopgap measure until more permanent solutions are found. Experts say that the landfill, which does not comply with international best practices and was established without an Environmental Impact Assessment (EIA), is affecting nearby residents’ health. The initial establishment of the landfill itself was a supposedly temporary solution to the 2015 trash crisis.

Lebanon adopted its first law on solid waste management in September 2018, but its implementation has been stalled.

The lack of a comprehensive solid waste management strategy and reliance on landfills, however, is itself incurring huge costs. The Waste Management Coalition found that Lebanon spends US$154.5 dollars to manage every ton of solid waste. By comparison, Algeria, Jordan, and Syria spend $7.22, $22.8, and $21.55, respectively. On average, Lebanon spends around $420 million per year on solid waste management, while countries like Jordan and Tunisia spend between $48 and $54 million per year.

A 2004 World Bank study estimated the cost of environmental pollution from illegal dumping and waste burning at around $10 million per year, and rising. Another study in 2014 by two waste management experts showed that the cost of environmental degradation from improper solid waste management is $66.5 million a year, 0.2 percent of the 2012 national GDP.

The study showed that improved waste management practices, such as recycling and composting, could save $74 million a year. Currently, about 85 percent of solid waste goes to open dumps or landfills. But according to American University of Beirut (AUB) researchers, only 10 to 12 percent of Lebanon’s waste cannot be composted or recycled.

The environmental degradation study did not measure the costs associated with the public health impacts of pollution generated by Lebanon’s current waste management practices. But in 2017, Human Rights Watch investigated the health problems from increasing open waste burning as a consequence of the lack of effective waste management strategies. Residents of areas where waste was being dumped and burned reported health problems including chronic obstructive pulmonary disease, coughing, throat irritation, skin conditions, and asthma. Air pollution from open waste burning has been linked to heart disease and emphysema and can expose people to carcinogenic compounds.

The 2018 waste law mandated the Environment Ministry to develop a national waste management strategy by March 2019. However, the strategy has not yet been adopted and is awaiting a Strategic Environmental Assessment to analyze the environmental effects of the solid waste strategy and to integrate environmental considerations into high-level decision-making.

Both Human Rights Watch and the Waste Management Coalition reviewed a draft summary of the strategy and submitted feedback and recommendations for revisions. However, the Environment Ministry did not share the full strategy with either organization and neither organization was able to see a final draft, raising concerns about the meaningfulness of the consultation.

In August, Lebanon’s Cabinet approved a roadmap that an environment expert described to Human Rights Watch as a step toward carrying out the solid waste management law. The expert said that a ministerial committee was looking into the need to amend the roadmap in light of progress made and developments since widespread protests began in Lebanon in October, as well as the impact of the economic crisis and Covid-19 on this process. The roadmap proposed establishing 25 sanitary landfills across the country, not all of which had received an EIA, as well as 3 incinerators.

Lebanon’s cabinet should not agree to landfill expansions or new landfills without first ensuring that adequate EIAs have been carried out, should increase transparency for the process, and should ensure meaningful consultations with municipalities and other stakeholders, Human Rights Watch and the Waste Management Coalition said.

Sustainable waste management solutions should include a focus on reducing the amount of waste sent to landfills rather than expanding existing landfills or establishing new ones. The cabinet passed a decree on September 19 mandating municipalities to provide the resources residents need to sort their trash at home. However, very few municipalities are abiding by the decree, and the majority of household waste is collected unsorted and sent to landfills rather than being sorted, recycled, composted, or otherwise diverted from a landfill.

Lebanon should also create public awareness programs to promote sustainable waste management practices that respect the right to health and a clean environment, while demonstrating the health risks of open dumping and burning. The authorities should ensure proper compliance and enforcement of waste management laws and decrees and set clear penalties for violators that serve as effective deterrents to future violations.

The costs of inaction on solid waste management are high. The cabinet should urgently review the roadmap and the strategy and adopt an integrated approach to solid waste management that decreases Lebanon’s reliance on landfills and gives municipalities the resources they need to fulfill their duties. Any plan presented to the cabinet should comply with environmental and public health best practices as well as Lebanese and international law and ensure that the authorities respect the right to health and to live in a healthy environment. It should also ensure that everyone is fully informed of threats to their health in their area.

Lebanon’s authorities should build an integrated waste management system that emphasizes waste reduction and material recovery and decreases Lebanon’s reliance on landfills. This can be achieved through economic policies that reduce the import of materials that end up in landfills as well as using financial, legal, and education tools to reduce the use of packaging, materials that are harmful to the environment, and single-use products in addition to encouraging recycling industries and investing in research for the valorization of non-recyclable waste.