Druze protest against Assad in southern Syria for third day 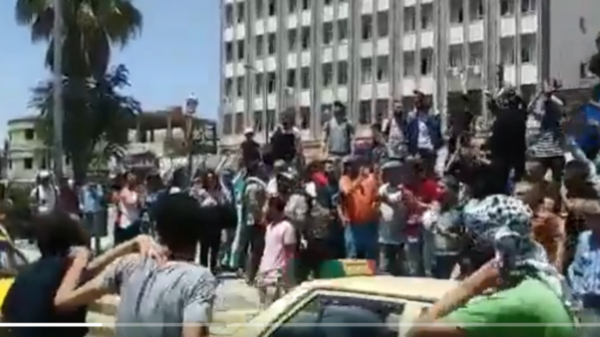 The city of Sweida witnessed massive protests for the third day against the regime of President Bashar al-Assad, due to the deteriorating economic conditions. The protesters chanted slogans against the Syrian regime and Bashar al-Assad, as they chanted “Free Syria and Iran and Russia get out” and ” the people want to topple the regime.”
Share:

More people joined the demonstrations against Syrian President Bashar Al Assad on Tuesday in the mostly Druze governorate of Suweida, partly prompted by the sharp deterioration in economic conditions across regime areas.

The demonstrations in the region near the border with Jordan entered their third day as the exchange rate of the Syrian pound crossed the 3,000 pound barrier against the dollar, compared with 2,000 to the dollar last week.

The lack of response so far by a regime whose indelible hallmark for the last five decades has been to deal dissent an iron fist indicates possible hesitation among Assad and his inner circle.

They might not want to employ the same violent tactics that crushed the initially peaceful demonstrators at the outbreak of the Syrian revolt in March 2011, as the economy today is far worse, and those who are suffering the deterioration include minority communities the Alawite-dominated regime regards as loyalist.

A citizen journalists’ site broadcast footage on Monday of young men and women chanting “Freedom, Bashar out” in main streets of Suweida city.

The marchers repeated the slogan “The people want the downfall of the regime”, which was the motto nine years ago of the peaceful Syrian revolt, itself inspired by the uprisings in Tunisia and across the region.

Almost two-third of Syria’s 600,000 Druze live in Suweida, an agricultural province. The country’s population is 19.5 million, according to the CIA Factbook.

The regime placated a significant proportion of the Druze in the last nine years by granting them de facto exemption from conscription, but the Druze armed actors in the governorate are not all pro-regime, and the community, as a whole, is heavily armed.

Mazen Ezzi, a Syrian political analyst who is in contact with some of the demonstrators, said the young people who started the protests had not expected that security forces would not crack down on them.

“The regime will respond. So far it does not know how,” Mr Ezzi said, adding that the any violent action by the regime would upset societal and military balances in Suweida that had worked in its favour.

In January, when the Syrian pound fell sharply to 1,400 to the dollar, demonstrations broke out in Suweida, but they were contained by the regime, which briefly forced merchants to reduce price of basic goods.

The currency downfall is mainly tied to the financial crisis in Lebanon and the economic repercussions of the coronavirus, as well as expanded US penalties against the regime.

But outrage in Suweida and in other areas under the regime’s grip appears to have been exacerbated by a feud that broke into the open last month between the president and his billionaire cousin, Rami Makhlouf.

The rift is revealing some of the extent of the billions of dollars in liquid assets that financiers say Mr Makhlouf has parked on behalf of Mr Assad in Syria and abroad.