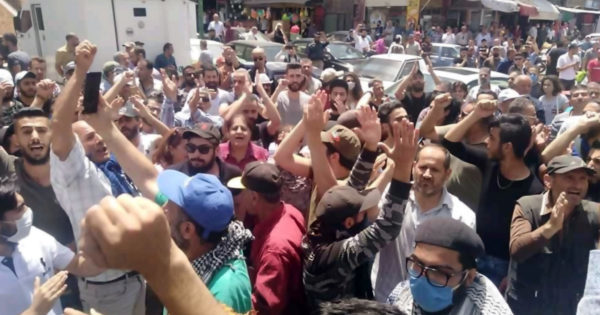 Demonstrations took place in the city of As Sweida, southern Syria, for the third consecutive day in protest against the deteriorating living conditions, economic and currency deterioration, as protesters demanded the departure of the regime’s president, Bashar Al-Assad
Share:

Syrians held a third day of rare anti-regime protests over deteriorating living conditions Tuesday in the government-held city of Sweida, a war monitor said, as the value of the pound sunk.

The value of the Syrian pound has plummeted with dizzying speed in recent days on the informal market, sending prices skyrocketing nationwide and shuttering shops.

Dozens rallied in the majority-Druze city of Sweida in southern Syria for the third day running, said the Britain-based Syrian Observatory for Human Rights.

On Tuesday, men and women gathered near the main headquarters of provincial authorities and later marched through the city’s streets, shouting anti-regime slogans, according to a video released by local news outlet Suwayda24.

“The people want to topple the regime,” they shouted in chants reminiscent of the 2011 uprising.

In videos published by Suwayda24 on Sunday, crowds could also be heard chanting: “Revolution, freedom, social justice,” and “Down with (President) Bashar al-Assad”.

Syria has grappled with an economic crisis compounded by Western sanctions, a coronavirus lockdown and a rapid devaluation of the local currency.

From Saturday to Monday the exchange rate soared from 2,300 to more than 3,000 pounds to the dollar, more than four times the official rate of around 700.

Before the conflict, it stood at 47.

Even before the latest devaluation, food prices had increased by 152 percent according to the World Food Program.

The Sweida region south of Damascus is the Syrian heartland of the country’s Druze minority community, an offshoot of Shiite Islam.

Sweida has been mostly spared by the Syrian conflict, and only faced sporadic jihadist attacks that were repelled.

Syria’s war has killed more than 500,000 people and displaced millions since it started in 2011 with the brutal repression of anti-government protests.