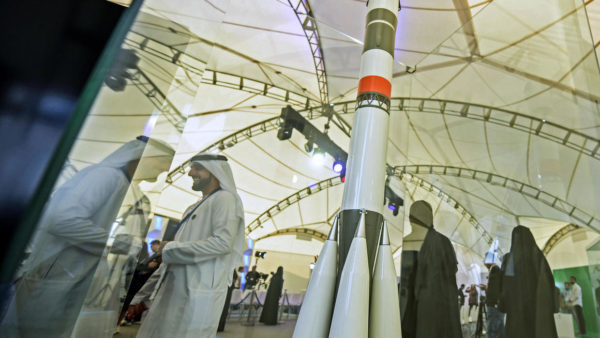 The UAE which is planning to launch the first Arab mission to Mars next month sent its first astronaut into space last year KARIM SAHIB AFP/File
Share:

The first Arab space mission to Mars, armed with probes to study the Red Planet’s atmosphere, is designed to inspire the region’s youth and pave the way for scientific breakthroughs, officials said Tuesday.

The unmanned probe Al-Amal — Hope in Arabic — is to blast off from a Japanese space centre on July 15, with preparations now in their final stages.

The project is the next giant step for the United Arab Emirates, whose colossal skyscrapers and mega-projects have put it on the world map.

The UAE sent its first astronaut into space last year and is also planning to build a “Science City” to replicate conditions on Mars, where it hopes to build a human settlement by 2117.

Omran Sharaf, the mission’s project manager, said that apart from the ambitious scientific goals, the mission was designed to hark back to the region’s golden age of cultural and scientific achievements.

“The UAE wanted to send a strong message to the Arab youth and to remind them of the past, that we used to be generators of knowledge,” he told AFP.

“People of different backgrounds and religion coexisted and shared a similar identity,” he said of the Arab world, where many countries are today wracked by sectarian conflicts and economic crises.

“Put your differences aside, focus on building the region, you have a rich history and you can do much more.”

Sarah al-Amiri, the mission’s deputy project manager, said it was imperative that the project have a long-term scientific impact.

“It is not a short-lived mission, but rather one that continues throughout the years and produces valuable scientific findings — be it by researchers in the UAE or globally,” she told AFP.

She said that the probe will provide a comprehensive image of the weather dynamics in Mars’ atmosphere with the use of three scientific instruments.

The first is an infrared spectrometer to measure the planet’s lower atmosphere and analyse the temperature structure.

The second, a high-resolution imager that will provide information about the ozone; and a third, an ultraviolet spectrometer to measure oxygen and hydrogen levels from a distance of up to 43,000 kilometres from the surface.

The three tools will allow researchers to observe the Red Planet “at all times of the day and observe all of Mars during those different times”, Amiri said.

“Something we want to better understand, and that’s important for planetary dynamics overall, is the reasons for the loss of the atmosphere and if the weather system on Mars actually has an impact on loss of hydrogen and oxygen,” she said, referring to the two components that make up water.

Sharaf said that fuelling of the probe is to begin next week.

It is scheduled to launch on July 15 from Japan’s Tanegashima Space Centre and return to Earth in February 2021, depending on many variables including the weather.

“If we miss the launch opportunity, which is between mid-July and early August, then we’d have to wait for two years for another window,” Sharaf said.

But hopes are high that the mission will take place as scheduled, and not be derailed by the coronavirus pandemic.

In a new sign of warming ties between Israel and Gulf Arab nations, the Jewish state Tuesday wished the UAE success with the mission.

We “hope this step will contribute towards deeper cooperation between all countries in the region,” its foreign ministry’s “Israel in the Gulf” Twitter account wrote in Arabic.