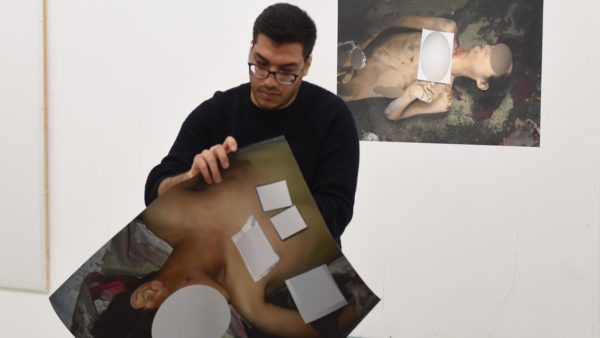 A member of the Syrian Organization for the Victims of War at a 2016 exhibition in Geneva displays pictures taken by defector Caesar documenting the torture of detainees by the Assad regime PHILIPPE DESMAZES AFP/File
Share:

Washington, DC- Top US lawmakers on Monday urged all nations to shun Syrian President Bashar al-Assad as a new US law imposes sanctions over atrocities.

The Caesar Act, which takes effect next week, penalizes any companies worldwide that deal with Assad and blocks any US reconstruction aid until perpetrators of abuses in Syria’s civil war are brought to justice.

In a rare joint statement, the top Democrats and Republicans in charge of foreign affairs in the Senate and House of Representatives said the law sends a message that “Assad remains a pariah.”

“He will never regain standing as a legitimate leader,” said the statement from Representatives Eliot Engel and Mike McCaul and Senators Jim Risch and Bob Menendez.

“We strongly urge all members of the international community against commercial or diplomatic engagement with the murderous Assad regime or engaging in sanctionable behavior.”

The law is named for Caesar, a former Syrian military photographer who fled at great personal risk in 2014 with 55,000 images of brutality in Assad’s jails.

Caesar, disguised, first testified before Congress in 2014 but the law did not pass until late last year as part of a giant defense spending bill.

The impending law already sent the Syrian pound tumbling to record lows against the dollar this weekend.

The Syrian government last week condemned the law, saying that the United States will “bear main responsibility for the suffering of the Syrian people.”

Assad ruthlessly crushed protests that erupted in 2011, with the country descending into a war that has killed more than 380,000 people, displaced millions and saw the rise of Islamic State extremists.

With Russian support, Assad has largely triumphed, but a number of policymakers in the West are adamant never to normalize him even if he stays in power.

Amnesty International said in 2017 that as many as 13,000 people were hanged in one military-run prison alone near Damascus, with the United States saying that authorities built a crematorium to cover up evidence.

Two Syrians went on trial in April in Germany in the first case worldwide over state-sponsored torture by the Assad regime.