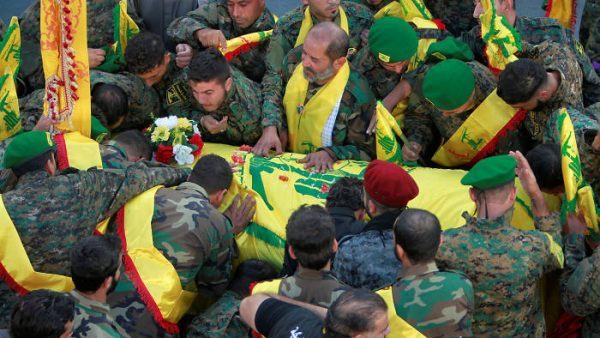 File photo: Members of Hezbollah, the Lebanese Shia movement, mourn over the coffin of one the group’s fighters who was killed last month during clashes in Aleppo, the northern Syrian city. Shia militia from Lebanon, Iran and Iraq are fighting alongside Syrian regime forces © Reuters
Share:

BEIRUT: Political forces in Lebanon have renewed pressure on the Iranian-backed Hezbollah to reform or face the US imposition of the Caesar Act, which could prove catastrophic for the country.

Lebanese political circles are abuzz with debate over Hezbollah’s involvement in Syria and the likelihood of the imposition of the Caesar Act, which calls for biting sanctions on the Assad regime and its supporters.

Mouaz Mustafa, who is a member of the Caesar Act team, recently said that prominent political figures in Lebanon were likely to be targeted alongside Hezbollah because the goal of the sanctions was to reach all people who had any kind of agreements with the Syrian regime.

Lebanese politicians are not taking this matter lightly as is evident from their statements calling for an end to smuggling along the Syria-Lebanon border and for Hezbollah to be disarmed.

Gebran Bassil, leader of the Free Patriotic Movement (FPM), recently blamed “de facto forces” for the illegal smuggling along the borders in an apparent dig at the powerful military outfit.

It is known that Hezbollah has long been involved in the war in Syria and maintains military bases and training centers inside Syrian territories near the border with Lebanon. Diesel and flour smuggling is carried out through illegal crossings from Lebanon to Syria.

In a strongly worded message, FPM MP Ziad Aswad said: “We cannot go on holding weapons while our people are hungry.”

Aswad warned Hezbollah that “the price of its weapons is paid by all Lebanese.”

The most obvious position on American messages reaching Lebanese parties came through the admission of Aswad that “the Americans’ decision is necessary to disarm the (Hezbollah) party, or else manage yourself, Lebanese.”

This unprecedented stance of the FPM against Hezbollah coincided with a political campaign by the Iranian-backed group’s opponents against the illegal crossings.

The forces also removed bridges in Lebanese border villages and the town of Hermel and closed dirt roads. One of these roads passes through the Orontes River Basin up to the Syrian border.

Hezbollah Secretary-General Hassan Nasrallah responded to calls to deploy the army and UN forces on the border with Syria by asserting that Lebanon “cannot control the situation alone because the borders are overlapping and the matter is complicated. The solution is a bilateral cooperation between the two governments
and armies.”

Former Minister May Chidiac said: “We have to wait to know the details of the (Caesar) Act and the regulations that will be covered by the sanctions because it is not clear yet.”

Chidiac told Arab News that “the American officials responsible for Lebanon stress the necessity of closing the illegal crossings and combating customs smuggling.”

The aim is to dry up the channels that support Hezbollah’s statelet in Lebanon, and the American conditions can be monitored during Lebanon’s negotiations with the International Monetary Fund regarding its financial crisis.”

Chidiac added: “Lebanon is no longer a priority for the Americans. There is a shifting of cards in the region due to the sharing of Russian and Iranian influence in Syria. What is incomprehensible is Hezbollah’s refusal to deploy UNIFIL forces on the eastern border of Lebanon with Syria, even though it accepted its deployment the Resolution 1701 to reinforce the role of UNIFIL on the southern border of Lebanon.”

The former Ambassador for Lebanon to the US Dr. Riyad Tabbara said that “the US … is sending messages regarding dealings with Hezbollah.”

Tabbara told Arab News that “The Caesar Act has opened the door for US President Donald Trump to choose whoever he wanted for sanctions. The phrase ‘everyone who cooperates with Hezbollah’ is flexible and allows for the expansion of targeting and pressure.”

Tabbara said that the Americans “do not want to ruin Lebanon, but rather to pressure Hezbollah.”

He added that “the FPM’s stance indicates that the movement has received American messages, but it is trying to persuade Washington that it can play an effective role on the issue of Hezbollah.”

Regarding illegal crossings, Tabbara said that pressure from Washington on their closure is incessant and does not involve the Caesar Act: “Rather, these pressures may help influence Hezbollah.”

Former MP Faris Suaeed said that the “Caesar Act will have a significant impact on Lebanon in terms of preventing the export of any commodity to the Syrian regime under the threat of prosecution and sanctions, and therefore what goes from Lebanon to Syria will be a violation of the international law. Whoever tries to persuade the Lebanese to invest in Syria is mistaken.”