Why did Assad just seize his cousin’s assets? 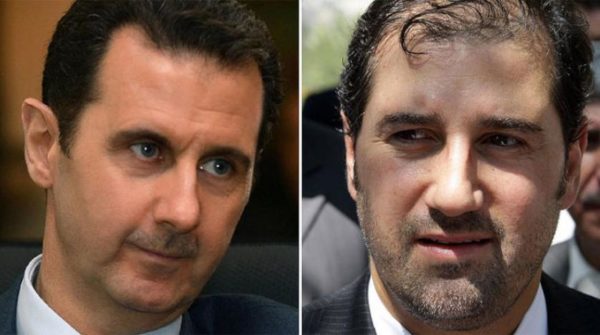 Syria’s richest businessman, Rami Makhlouf, announced this week that the regime led by his cousin—President Bashar al-Assad—had seized his assets, the latest escalation in a rare public conflict in the family that has ruled Syria for almost 50 years. Makhlouf has posted a series of videos to Facebook in recent weeks rebuking the regime in which he was a key player for decades, offering an unusual and dangerous public challenge to Assad. “Frankly, if he wasn’t part of the family, he’d probably be dead,” said Robert Ford, who served as the U.S. ambassador to Syria and is now a senior fellow at the Middle East Institute and the Jackson Institute for Global Affairs at Yale.

Before the war, Makhlouf was believed to control some 60 percent of the Syrian economy and was described in a 2008 U.S. State Department cable as “Syria’s poster-boy for corruption.” During the conflict, he was a key financial backer of the regime. He was involved in oil and construction, but it was his ownership of Syria’s biggest cell network, Syriatel, that has likely put him in the regime’s crosshairs. The government claims he owes $250 million in taxes; Makhlouf says this is a lie concocted by the security services. On Thursday, Syria’s justice ministry said that he would be subject to a travel ban until the case was resolved.

It’s the economy, stupid. Theories abound as to what prompted Assad to move against his cousin, including speculation that Russia—which turned the tide of Syria’s civil war in favor of the regime when it intervened in 2015—is growing frustrated with Assad’s economic mismanagement and forcing him to turn the screws on his allies. The Syrian war has become a quagmire for Russia, but Moscow’s distaste for regime change is well known―especially when there is no clear successor.

The more likely explanation is Syria’s struggling economy, which has been battered by years of war and economic sanctions. The value of the beleaguered Syrian pound has dropped precipitously since the beginning of the year. Aside from Makhlouf, around a dozen pro-regime businessmen have been targeted for shakedowns as the regime looks to line its threadbare pockets. In recent years, Assad began collecting payments from rich businessmen as a kind of tax, said Ford, but Makhlouf was increasingly reluctant to pay—possibly singling himself out for retribution.