Lebanon’s cash crisis hits Eid: ‘Nothing to celebrate this year’ 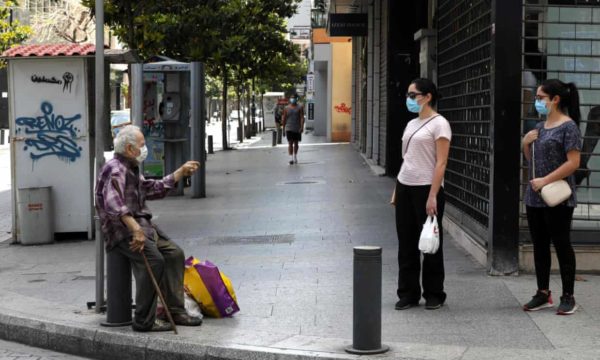 A man solicits the charity of passersby in Beirut. The financial crisis is likely to widen a disparity between an affluent elite and the rest. Photograph: Anwar Amro/AFP/Getty Images
Share:

Eid al-Fitr, the three-day celebration that capped the monthlong fast, was an annual highlight as customers splurged on sugary treats and shiny new clothes. Cakes were made for the occasion. Abstinence was replaced by bountiful rewards.

But not this year. With Lebanon facing an unprecedented economic collapse, much of what Amhad and nearby shopkeepers are selling in one of Beirut’s poorest neighbourhoods is beyond their own means.

Here and across the country, prices have at least doubled over the past two months, leaving basic goods outside the reach of more than half the population.

“Even during the civil war there was money and no one starved,” said an unemployed public bus driver, Mohammad, in his late 50s, in the Hay el Sellom neighbourhood. “There were queues outside bakeries in tough times, but people were waiting to pay. Now it’s just welfare. Who would have thought?”

How it came to this in a nation renowned for somehow getting by, no matter the challenge, has led to a nationwide reckoning as a long-stable currency continues to crumble against the dollar, which is still being used to pay for imports. In a country that produces next to nothing, that means nearly all food, and much of what else is needed to keep societies afloat.

The unravelling has revealed a stark reality: that Lebanon’s relative prosperity was built on a financial illusion. The crisis is likely to devastate already impoverished communities, exert escalating pressure on middle classes and widen a disparity between an affluent elite and the rest.

Politicians have appealed for foreign aid, and the prime minister, Hassan Diab, has acknowledged that Lebanon is on the brink of an “unimaginable food crisis”. Writing in the Washington Post, Diab said a triple whammy of ingrained state corruption, a nonexistent agricultural sector and a downturn caused by Covid-19 was responsible.

He and other members of a ruling class blamed for the predicament are yet to offer solutions that will satisfy those most in need. In an effort to reduce prices, Diab on Thursday flagged the introduction of subsidies for basic foodstuffs and directed the central bank to defend the crippled Lebanese lira.Advertisementhttps://7068fe15977788c4b1e12a711d373cc0.safeframe.googlesyndication.com/safeframe/1-0-37/html/container.html

Aya Majzoub, a Lebanon researcher at Human Rights Watch, said food security was rapidly diminishing. “People are already reporting cutting down their meat consumption and replacing it with cheap alternatives,” she said. “Soon, a large swathe of the population may be unable to meet the daily minimum dietary energy requirements, which could have huge public health consequences, including stunting the physical and cognitive development of children and making the population more prone to disease.”

Majzoub added: “The Lebanese government should urgently implement a coordinated plan to identify families in need and provide financial or in-kind assistance. They should also take other measures to help alleviate people’s economic hardship, including forgiving utility payments or providing significant grace periods to allow families time to pay accrued fees as well as mandating a moratorium on evictions. People should not be paying the price for decades of government corruption and mismanagement.”

Fayaz Aram, a shopkeeper in the Beirut suburb of Sodeco, was not optimistic. “I doubt things can fall from where they are. They will never return the lira to where it was because basic economics says it was overvalued. That means food prices won’t fall far, if at all. Also, wages will never rise to meet the gap.”

Malak Hamdan, managing director of the Consultation and Research Institute, a watchdog group, said: “What’s coming is greater than today’s woes. It is my expectation that from six months’ time to the next two years we will be witnessing unprecedented woes.”

On the streets of Hay el-Sellom, concern is palpable. One woman wandered a usually bustling street cursing at prices in the shop she had just visited, which she could no longer afford. In Amhad’s sweet shop, half-empty trays of knafeh and baklava were not a testament to pre-Eid trade, but the proprietor’s inability to stock up. “I’m just covering debts this year,” he said. “This is the worst of times.”

Nearby, bus driver Mohammad agreed. “My wife was going to buy me a shirt for Eid,” he said. “I told her she was crazy and to keep the money for the few bits of food we can afford. There is nothing to celebrate this year.”