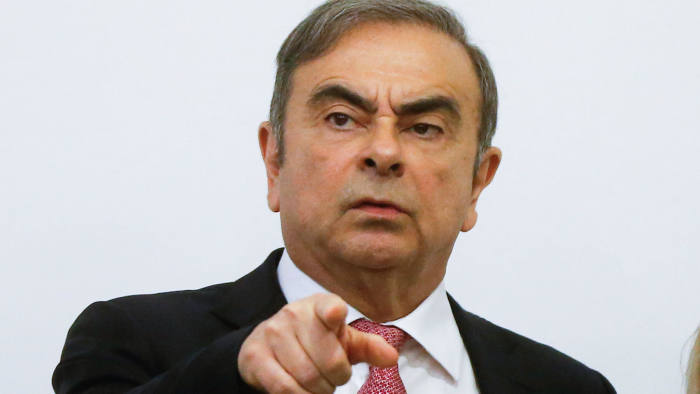 A father and son suspected of helping fugitive former Nissan chief Carlos Ghosn flee Japan in December were arrested in the United States Wednesday and taken to court where they faced a judge in a rare online appearance.

Michael Taylor, a former US special forces member turned security contractor, and his son Peter Taylor were named in a Japanese arrest warrant seeking their extradition for participating in Ghosn’s dramatic escape.

The two men, ages 59 and 27, appeared in court wearing orange jumpsuits and beige facemasks as a US federal judge in Massachusetts presided via videoconference due to emergency measures during the coronavirus pandemic.

The two pose a flight risk and must remain in detention as the United States awaits a formal extradition request from Japan, prosecutors said.

“Peter Taylor is an exceptionally high flight risk and that fact alone requires his detention,” US attorneys wrote in their unsealed court filing.

The Taylors were arrested early Wednesday in Harvard, Massachusetts as the son was preparing to travel to Lebanon, where Ghosn fled after sneaking out of Japan.

The United States and Japan have an extradition treaty, but Lebanon and Japan do not.

Japan has yet to file an official extradition request and has 45 days to do so.

The Taylors’ defense attorney Paul Kelly said the case was “not as straightforward as it may seem,” and said there were “other” judicial proceedings in a country other than Japan or the United States. He did not elaborate.

A bail hearing is expected in the coming days or weeks. “The status quo for now will be detention,” Judge Donald Cabell said.

The Taylors and a Lebanese man named George-Antoine Zayek are accused by Japan of helping Ghosn flee the island nation on December 29.

Ghosn, who led Nissan for nearly two decades before his arrest in 2018, was out on bail awaiting trial for alleged financial crimes when he made the audacious escape.

Between July and December 2019, Peter Taylor made multiple trips to Japan and “met with Ghosn at least seven times,” prosecutors said.

According to the court documents, the Taylors and Zayek helped the auto boss hide inside a large black case of the kind used to transport audio equipment for music, which they then loaded onto a private jet.

At the time, luggage being put on such an aircraft did not need to be checked.

According to the court filings, Michael Taylor and Zayek posed as musicians. On December 29 they travelled with Ghosn by high-speed train from Tokyo to Osaka, where they entered room 4609 of a hotel near the Kansai International Airport.

The cases which Ghosn allegedly used in his Houdini-like escape were brought into the room earlier in the day by Taylor and Zayek.

“There is no image of Ghosn leaving room 4609,” the court filings say, citing security camera evidence.

“Instead, Ghosn was hiding in one of the two large black boxes being carried by Michael Taylor and Zayek.”

The two men boarded a private jet with the large cases and departed for Turkey later that night, the court documents say.

“Two days later, on December 31, 2019, Ghosn made a public announcement that he was in Lebanon,” the prosecutors added.

Japanese authorities said early this year that there is no record of Ghosn departing the country.

The court filings provided a detailed account of the escape.

“The plot to spirit Ghosn out of Japan was one of the most brazen and well-orchestrated escape acts in recent history,” the prosecutors wrote, “involving a dizzying array of hotel meetups, bullet train travel, fake personas and the chartering of a private jet.”

In February Nissan filed a civil lawsuit to reclaim some 10 billion yen ($90 million) from Ghosn for what it called “years of his misconduct and fraudulent activity.”