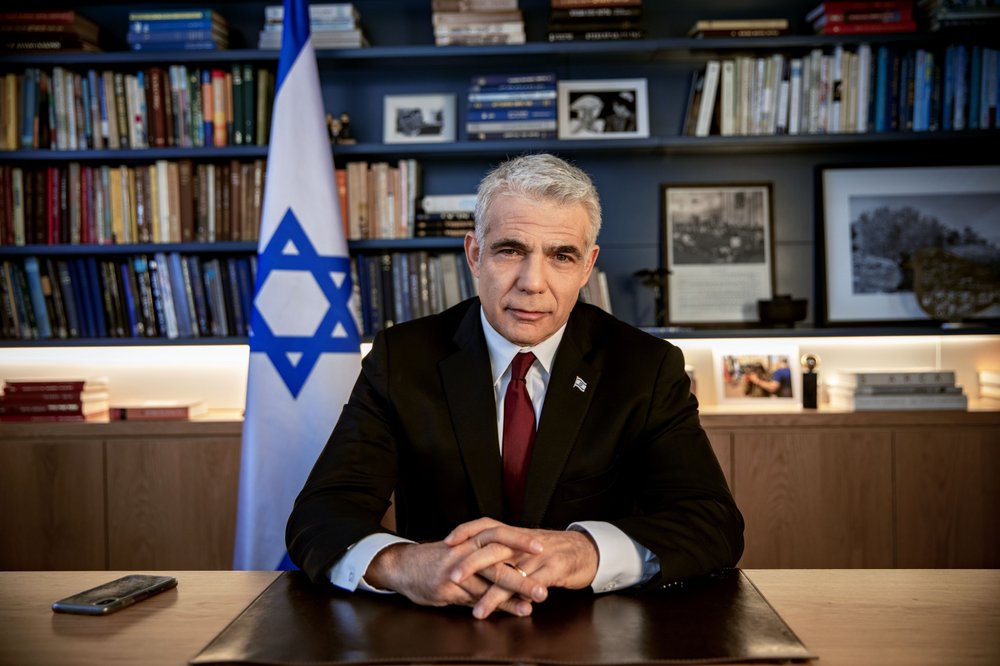 Israel’s new opposition leader said Thursday that Benjamin Netanyahu’s upcoming corruption trial is “embarrassing” the country and that he believes the only reason the long-time prime minister is still in office is because lawmakers never imagined a scenario in which an indicted premier would not have the decency to step down himself.

In his first English-language interview since assuming the post, Yair Lapid said he was uncomfortable addressing Netanyahu’s troubles before a foreign audience. Despite their rivalry, he said he takes no joy in watching a sitting prime minister walking into a courtroom defendant’s dock and said he felt bad that it would attract worldwide attention when the trial begins Sunday.

“It’s almost like I’m saying, I wish they would never notice this … this shouldn’t happen,” Lapid told The Associated Press. “This is horrible for the spirit of the nation.”

Together with former military chief Benny Gantz, Lapid led the centrist Blue and White party to a deadlock with Netanyahu’s Likud in three consecutive elections over the past year. But the alliance evaporated when Gantz, warning against the prospect of continued stalemate amid the coronavirus pandemic, bolted to join Netanyahu instead — reneging on his central campaign promise not to serve under an indicted prime minister.

Netanyahu, Israel’s longest-serving prime minister, and Gantz this week swore in their new government, the most bloated in Israeli history with 36 ministers and 16 deputies. Gantz argued the wasteful arrangement was unfortunate and unseemly, with unemployment soaring above 25% due to economic damage from the pandemic, but was still preferable to another costly and divisive fourth election.

Lapid attacked the narrative as a false choice. He said that had they stuck together, he and Gantz could have replaced Netanyahu with an alternative coalition and passed bills barring him from running again because of his legal situation.

“We don’t have it in our laws because who thought it can be that somebody with three indictments will not step down immediately, just out of courtesy for the people,” he said. “The one thing we didn’t take into account is that he (Gantz) will collapse under the pressure.”

Instead of becoming foreign minister and a major driving force in a new government, Lapid now finds himself on the outside, heading a shrunken opposition comprised of parties with little in common besides their disdain for Netanyahu. Besides Lapid’s own condensed Yesh Atid faction, they range from right-wing religious nationalists, to secular advocates of Soviet immigrants to Arab-led parties that reject Israel as a Jewish state.

Still, as opposition leader, Lapid has an official state position that grants him an audience with visiting dignitaries, monthly security consultations with the prime minister and a platform to rebut his speeches in parliament. It’s a lofty perch in which he can position himself as a prime minister in waiting, and one Lapid says he plans to utilize well.

“We’re going to speak about how much are you guys going to spend on yourself while the people of Israel, like the people all around the world, are suffering from the results of the coronavirus,” he said of his planned stances.

“Just think of the bureaucracy we’re creating,” he added, speaking to the AP at his party’s newly renovated Tel Aviv office. “It’s a monster with 52 heads. So, what we’re having now is very expensive in the wrong time.”

Netanyahu faces charges of fraud, breach of trust, and accepting bribes in a series of corruption cases stemming from ties to wealthy friends. He is accused of accepting lavish gifts and offering to grant favors to powerful media moguls in exchange for favorable coverage of him and his family. He denies the charges and has lashed out at the media, police, prosecution and courts of forging a conspiracy to oust him.

By focusing on differences in values, rather than policy, Lapid looks to be appealing to those moderates who have tired of Netanyahu’s lengthy rule since 2009 and will soon likely feel the economic pain of his actions. Tapping into an Obama-esque vernacular, the telegenic Lapid said his main challenge was to convince Israelis that “change and hope are possibilities and even probabilities in the near future.”

The new government’s controversial power-sharing deal calls for Netanyahu to serve as prime minister for the government’s first 18 months before being replaced by Gantz for the next 18 months. But Lapid, citing his previous experience as finance minister under Netanyahu, said he doubts it will get that far, and Netanyahu will find a pretext to topple the government before handing over the reins to Gantz.

That’s when Lapid, a 56-year-old former popular TV anchorman and novelist, says he is convinced he will succeed where so many others have failed in challenging and finally unseating Netanyahu.

“All things come to an end,” he said. “And I think with the trial coming, with the economy going to where it is going, I think, and I truly believe, the people of Israel will understand it’s time to move forward. It’s time to say to Netanyahu ‘thank you, but enough is enough.’”