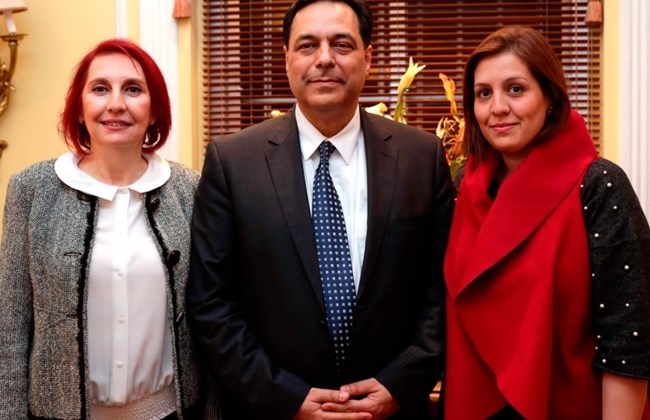 The wife of Lebanese Prime Minister Hassan Diab has come under fire for suggesting nationals could take low-skilled jobs traditionally held by migrant workers, including as maids or janitors.

Nuwar Mawlawi’s comments come as the country faces a dire economic crisis and soaring unemployment and povertyyet where many unskilled or semi-skilled jobs are almost exclusively held by foreign nationals.

“Women sitting at home could work in homes. That is a simple example. Janitors, fuel stations jobs would be for locals.”

Her comments sparked debate on social media with some supporting her comments, while others used the derogatory hashtag “Hassan, control your wife”.

“All governments in the world are trying to improve the conditions of their people except for Hassan Diab’s wife,” one user tweeted.

“She wants girls and women to work as maids and housekeepers.”

Like many who expressed outrage at Ms Mawlawi’s words, the user told of his allegiance to Mr Diab’s predecessor and fierce critic, Saad Hariri.

Mr Diab’s office defended Mrs Mawlawi, saying she meant that the “Lebanese must depend on themselves in light of the difficult economic conditions that Lebanon is going through”.

“Ms Mawlawi’s words may be glaringly obvious but they hurt the sense of superiority of the Lebanese,” Mr Nahas told The National.

Those siding with Ms Mawlawi shared the hashtag: “there is no shame in work.”

“With more than 33 per cent of Lebanese citizens living under the poverty line with almost no food and proper housing, what she proposed makes sense and would be an opportunity for these people to have some income,” user Sara Faraj tweeted.

Some highlighted the misogynistic nature of many attacks against Ms Mawlawi, a professor of English and linguistics at the Lebanese American University.

“So happy the hashtag is getting more tweets than that other misogynistic hashtag,” another user wrote.

Lebanon is experiencing its worst-ever financial crisis, with the local currency in freefall for months.

Officials anticipate poverty to increase to nearly half the population and for unemployment to rise above 35 per cent.

Lebanese families employ about 200,000 workers from Africa and Asia, with few labour protections and many in poor conditions.

Withholding passports, salaries and preventing time off or proper places to sleep are commonly reported, as is physical and mental abuse.

One of the major draws for workers to the country was that the Lebanese pound was pegged to the dollar, so migrant workers could send dollars home to support their families.

But with the dollar disappearing from the local market and the pound crashing in value, that incentive is gone.

Thousands of migrant workers have returned home in recent months after losing their jobs or when employers began to pay their salaries in Lebanese pounds.

Several embassies, including that of the Philippines, have been helping their nationals with repatriation flights and assisting with expenses.

Low-skilled labour from Asia and Africa started arriving in Lebanon during the civil war in the 1980s and soared in the next decade as the country launched a massive post-war reconstruction effort.

A live-in maid from the Philippines or Sri Lanka, sometimes paid as little as $200 a month, became a fixture in many Lebanese households.

Foreign men were favoured in restaurants, construction or as janitors.

A study led by Mr Nahas when he was labour minister, between 2011 and 2012, showed Lebanese households hired foreign maids for high social status in a society plagued by corruption and nepotism.

“We suspected that several variables could explain why people hired a maid – whether both the husband and wife worked; whether they had young children; or whether there were elderly or handicapped people in the household,” he said.

“What was surprising was that none of the variables had any influence on whether people had a maid or not. Only income had an impact.

“That means that people hired maids because they were important for their social status, not because they responded to a need described by the variables.”

Despite many foreign workers leaving, there is little chance that the Lebanese will take their jobs, especially as maids, Mr Nahas said.

“There will be a fierce resistance,” he said. “Working as a maid is stigmatised now and once that happens, there is very little chance for that to change.”

Last February PM Diab appointed his wife, Nawar , as Deputy President of the Lebanese National Women’s Association. The organisation is headed by Claudine Aoun ( wife of General Chamel Roukoz) and the daughter of President Michel Aoun, and her first deputy is Randa Berri, the wife of Parliament Speaker Nabih Berri.

The distribution of posts among the three politically connected ladies has triggered plenty of criticism on Lebanese social media networks. It comes amidst a storm of angry protests that have ripped through the country since mid-October 2019, as young people demand an overhaul of the entire political system, along with a serious campaign to combat corruption, embezzlement, and nepotism.