After 5 bloody years in Syria, Russia Is turning against Iran—and Assad 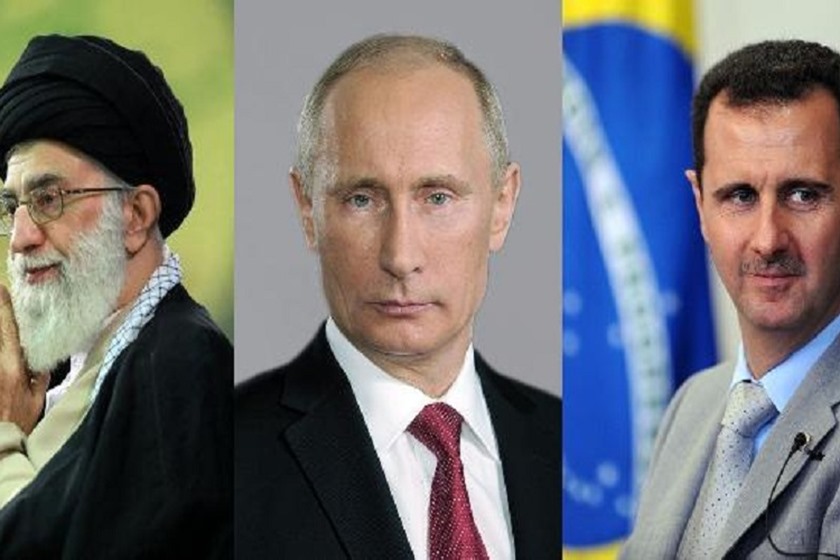 GAZIANTEP, Turkey—After five years fighting to preserve Bashar al-Assad’s regime in Syria, Russia now appears inclined to dispose of its infamous client. Assad’s persistent brutality and corruption, and his inability to establish even the semblance of a functioning state, has grown to be a burden Moscow would prefer not to bear.

And then there’s the problem of Iran. Assad, members of his family, and his Alawite clansmen enjoy close, perhaps unbreakable, bonds to the regime in Tehran and to Iranian-backed militias in Syria. All of which undermines Moscow’s primary mission there: to rehabilitate the Assad regime as a symbol of stability capable of attracting hundreds of billions of dollars of foreign investment for reconstruction, which Russian firms would then be poised to receive.

As long as Assad’s relatives continue to function as a mafia and give free rein to Iranian troops using Syria as base of operations to threaten Israel and plan attacks against U.S. troops in Iraq, those countries likely to foot the bill for Syrian reconstruction—the nations of Europe and the Gulf—are unlikely to come up with the cash.

This has not gone unnoticed by the United States.

“Assad has done nothing to help the Russians sell this regime,”James Jeffrey, the U.S. special envoy for the Coalition to Defeat ISIS, told reporters in a State Department briefing on Thursday. “You find Assad has nothing but thugs around him, and they don’t sell well either in the Arab world or in Europe. We have heard repeatedly from Russians we take as credible that they understand how bad Assad is.”

The Syrian president’s “refusal to make any compromises” in order to secure diplomatic recognition and acceptance for his regime has jeopardized “hundreds of billions of dollars in reconstruction assistance” for Syria, according to Jeffrey.

Jeffrey’s statements come just one week after Russian state media unleashed a slew of reports and editorials targeting Assad, portraying the beleaguered president as hopelessly corrupt and unfit to govern, and suggesting the time had come to replace him with a new leader.

The first batch of articles was published by the Russia’s Federal News Agency (FNA), an outlet owned by Yevgeny Prigozhin, a Russian oligarch and chairman of several companies implicated in the 2016 U.S. elections scandal. Appearing over the course of a mere three hours on April 17, they would shake Syria to its core.

The first of the three articles in question highlighted a corruption scheme carried out by the regime in summer 2019 in which the Syrian prime minister purportedly lied to citizens about oil and gas scarcities in order to justify the occurrence of long power outages while selling Syrian electricity to businessmen in Lebanon. The second piece cited an opinion poll claiming only 32 percent of Syrians would vote for Assad in the country’s upcoming 2021 presidential election.

The third and final article, entitled, “Corruption is Worse than Terrorism,” chastized President Assad for personally failing to combat corruption, prevalent at all levels of the state.

That these were published by Prigozhin’s news agency was the kind of signal it would be hard for Assad to miss. Prigozhin, who first built his fortune as a caterer, is sometimes known as “Putin’s chef.” But of particular relevance to Syria is his role as chairman of the Wagner Group, whose mercenaries have fought alongside Assad regime forces since October 2015 and helped the latter take back control of key revenue generating infrastructure such as the al-Sha’ir gas field in Homs province.

Deputy Assistant Secretary Christopher Robin told the same State Department briefing Thursday, “Wagner is often misleadingly referred to as a Russian private military company, but in fact it’s an instrument of the Russian government which the Kremlin uses as a low-cost and low-risk instrument to advance its goals.”

The article on corruption would also point out, suggestively, that the Assads are not the only powerful family in Syria, “there are also the Makhloufs.”

Rami Makhlouf, who is in fact Bashar al-Assad’s first cousin, is Syria’s wealthiest man, and also, it would seem, Russia’s man. Certainly he has strong ties to the Kremlin and for years has been one of the most vocal critics of Iran’s presence in Syria. In July 2018, the al-Watan newspaper, one Syria’s most prominent pro-regime mouthpieces and owned by Rami Makhlouf since 2006, published a then unprecedented public rebuke to Iran, accusing it of sponsoring Islamist fanaticism throughout the Middle East alongside Turkey and Qatar, the main backers of Syria’s opposition. (Rami Makhlouf’s father Muhammad and brother Hafiz meanwhile are alleged by some to be living in Russia.)

The April 17 articles published by Prigozhin’s FNA preceded the release of a wave of other articles and items in the media over the next 12 days that would further drive home the point that Moscow was considering options other than Assad to rule Syria.

TASS, Russia’s largest state-run news agency, wrote in one editorial that, “Russia suspects that Assad is not only unable to lead the country anymore, but also that the head of the Syrian regime is dragging Moscow towards the Afghani scenario.” This is like evoking the Vietnam War for an American audience, a reference to the Kremlin’s botched campaign through the 1980s that helped bankrupt the Soviet Union and finally break it apart.

Amid this coverage, TASS would also take swipes at Iran, claiming that the Islamic Republic has “no interest in achieving stability in the region, because it considers it a battlefield with Washington”.

On April 30, the Russian International Affairs Council (RIAC), a think tank established by Moscow’s Ministry of Foreign Affairs, released a scathing report saying Russia was in talks with other parties to the Syrian conflict to draw up plans for a political resolution that did not include Bashar al-Assad as president. The report highlighted purported Russian efforts to compel the Syrian regime to commit to ceasefires with both American-backed and Kurdish-led Syrian Democratic Forces (SDF), and the Turkish-backed Free Syrian Army (FSA) opposition, while beginning steps to form a new unity government that would include representatives from both.

That day, Rami Makhlouf, whose assets were frozen five months earlier as part of a tax dispute, uploaded a video onto his personal Facebook page accusing the Assad regime of corruption. In a state known for carrying out the full-scale slaughter of those who test its authority, Makhlouf’s videos, coming on the heels of the unprecedented Russian attacks in the media, sent shockwaves throughout the country.

While the Makhlouf clan clearly has thrown its lot in with Russia, key members of Bashar al-Assad’s immediate family and others with ties to Qardaha in Syria’s largely Alawite Latakia province, are among the most prominent Iranian-backed militia leaders in Syria. It’s an alliance that traces back to his father Hafez al-Assad, who was born in Qardaha, and who forged ties with the Iranian revolution almost from its beginning more than 40 years ago. The Iranians responded by offering religious legitimacy to the Alawite sect, which is regarded as heretical by Sunnis and indeed by many Shi’a.

These Qardaha militia leaders have regularly engaged in armed clashes against Russian backed units. They are among the most egregious violators and abusers of power, overseeing wide networks of corruption similar to those lamented in the Russian media. And foremost among them is Bashar’s younger brother, Maher al-Assad.

Since April 2018, Maher al-Assad has commanded the Syrian Army’s 4th Armored Division, one of country’s oldest, best equipped and overwhelmingly Alawite brigades. After the 2011 outbreak of the Syrian revolution, when the loyalty of much of the army was in doubt, it became a refuge for numerous Alawite-Shi’a dominated pro-regime militias.

Currently, the 4th Armored Division’s members control many smuggling operations throughout the country, in cities from Albu Kamel on Syria’s eastern border with Iraq to Latakia on the Syrian coast, where the port was leased to Iran on October 1 last year. It has since become one of the biggest export hubs for drugs headed to markets in Europe, the Middle East and North Africa.

On July 5, 2019, Greek coast guard and drug enforcement officials announced the biggest drug bust in history, seizing 5.25 tons (33 million pills) of Captagon amphetamines worth $660m hidden in shipping containers loaded at the Latakia port in Syria. That followed a long string of such seizures made by Greek authorities. More recently, in late April, customs officials in both Saudi Arabia and Egypt also announced the seizure of similar quantities of drugs in containers traced back to Latakia. Local reports have accused a range of actors including Maher al-Assad’s 4th Division, Hizbollah, Rami Makhlouf, and others of profiting from the massive drug exports emanating from the port.

In January 2019 the 4th Armored Division launched attacks on the Russian-backed Tiger Forces unit in an attempt to wrest control of smuggling routes between regime- and opposition-held territory in Idlib province. The clashes led to the death of 70 fighters. These and other skirmishes prompted Russia to back a major campaign to arrest 4th Division and other Iranian-backed units throughout the country beginning in April 2019, which succeeded in rounding up numerous mid-ranking Iranian-backed officers.

Among those targeted in the campaign was Bashar Talal al-Assad, a cousin to the president (similar name, different people) who was wanted on drug and weapons trafficking charges. Unlike others who were detained in the roundup, Bashar Talal al-Assad and his ‘Areen Brigade managed to fight off Russian-backed forces that sought to arrest him in Qardaha. He then pledged to attack Russia’s Hmeimim military base, located 17 miles east of Latakia city, in the event the regime sought to arrest him again.

For Russia, the threat of such attacks on its military infrastructure is a real concern. The Hmeimim base—from which Moscow has directed its entire military campaign in Syria—had already been subject to a series of attacks from January to October 2018 by other Iranian-backed militias in the area.

The threat posed by both Iran’s acquisition of the Latakia port and its support for local Assad family proxies in Syria’s coastal region is exacerbated by the fact that Tehran has also begun making progress toward completing construction of its Shalamcha railroad, which, via stops in Basra, Baghdad, Abu Kamel and Damascus, will give Tehran direct access to the Syrian and Lebanese coasts.

If Iran succeeds in integrating the Latakia port with the Shalamcha rail line, this will cut off Hmeimim from Russian forces in central and southern Syria and enable Tehran to quickly deliver weapons to proxy forces in Latakia that are already engaged in clashes against Russian-backed groups.

Moscow’s inability to control Iranian backed Syrian militiamen engaged in widespread crime, corruption, and assaults on Russian forces has infuriated the Kremlin. But Russia is not the only major player on the ground with scores to settle against Iran, and the Russian military leadership in Syria has ignored if not largely encouraged Israeli strikes on Iranian troops throughout the country.

It may not be coincidental that the Israeli attacks have increased in pace and scope since April, following the flurry of Russian media articles attacking Assad and his regime. “We have moved from blocking Iran’s entrenchment in Syria to forcing it out of there, and we will not stop,” Israel’s new defense minister, Naftali Bennett, declared on April 28.

Without Russia, Iran has found itself the odd man out in Syria, the single party still seeking to push for war at a time when most other international players have been struck with fatigue and simply seek to put Syria’s pieces back together. President Recep Tayyip Erdoğan of Turkey, the last patron of Syria’s battered FSA opposition, has himself made peace with Moscow, effectively agreeing last March to cede control of wide swaths of rebel held territory after a particularly bloody Russian led campaign against the last FSA holdout in Idlib province that ended in victory for regime forces.

Ironically, Erdoğan’s long-held desire to overthrow Syria’s president may still come to fruition, albeit not as he expected, as Assad’s ouster may come at the hands of Russia itself, and not the revolution.