Could Assad row with cousin tear down Syrian regime? 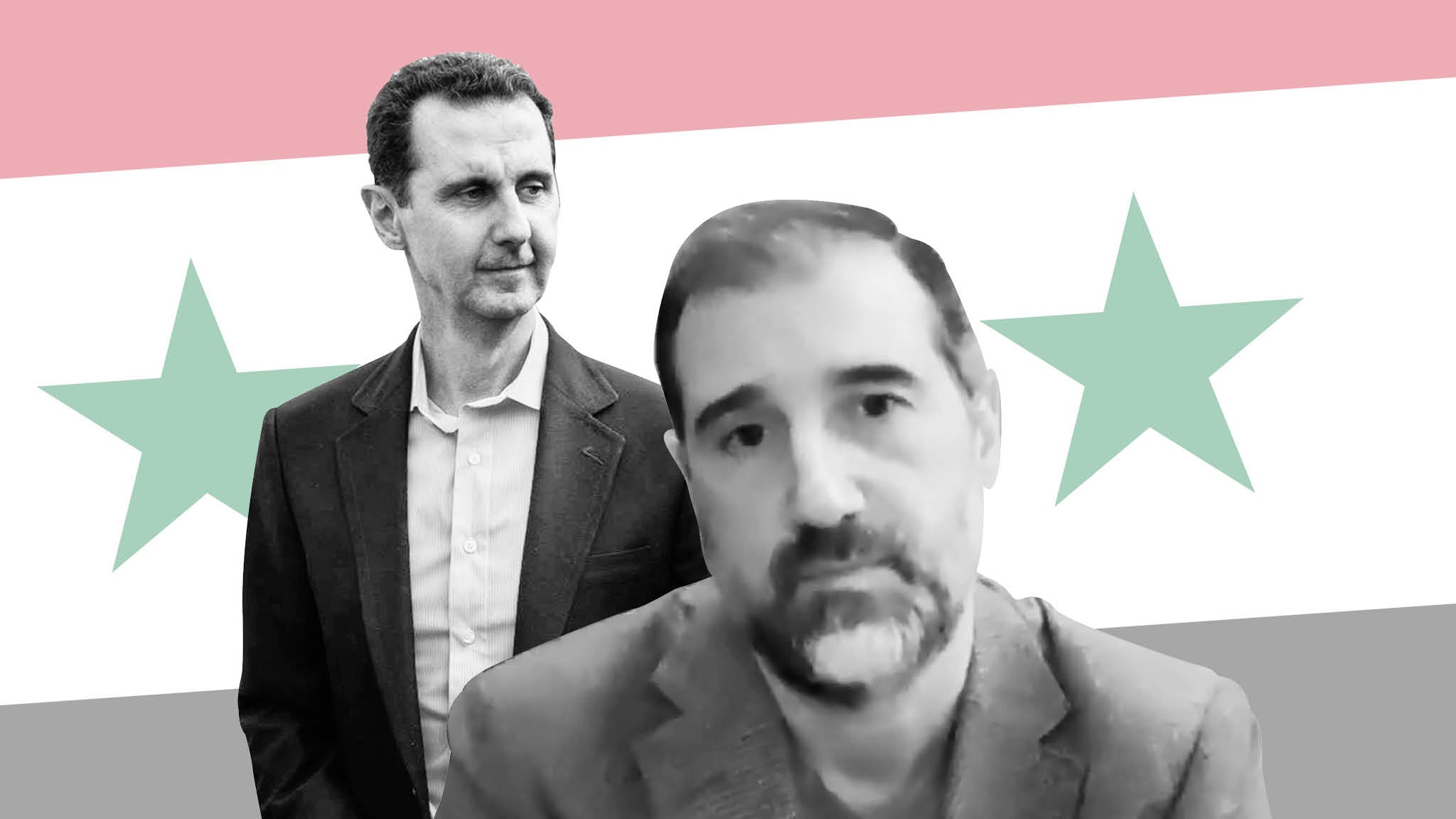 The Infighting Within the Syrian Regime. billionaire Rami Makhlouf (R) and his first cousin president Bashar al-Assad continues, Could the row tear down Syrian regime?
Share:

Adefiant tyrant and his ruthless wife square up against the family oligarch, with the spoils of a nation at stake. It could be standard Ramadan television fare, but not this year. Instead, all the intrigue of Syria’s ruling family has been laid out in a spectacular real-life drama that has gripped the country and the region.

Leading the cast is the Syrian leader, Bashar al-Assad, and Syria’s first lady, Asma al-Assad, but star billing has so far been taken by the president’s first cousin, Rami Makhlouf, who last week took to Facebook to do the unthinkable: air the normally inscrutable family’s dirty laundry.

Makhlouf, Syria’s most powerful tycoon and its richest man throughout Assad’s 20-year reign, complained that his cousin was sending secret police to seize his assets and shutter his businesses. In doing so, he laid bare a power struggle that now threatens the very existence of the Syrian regime, sparking a fissure in the ruling Alawite sect, and leaving regular Syrians aghast.

Without a hint of irony, Makhlouf boasted of bankrolling Syria’s infamous security forces, who have tortured and disappeared thousands of people in nine years of war, then complained that his employees had been treated in “an inhumane way”.

“We were all shocked at that,” said Monir Nabilsi, a lawyer from northern Syria. “Even my Alawite friends. Though his tone was reverential to Bashar, his words had meaning. He and the Makhloufs ran the finances of the country, while the Assads ran politics and security. That was the pact. Now what?”

Makhlouf’s two videos were widely mocked for a tone lacking in awareness and content that bordered on parody. But in the days since, more public statements from powerful Syrians have cast the appearances in a different light. One, Firas Tlass, the son of a former defence minister, appeared on the Moscow-owned TV network Russia Today to confirm that Makhlouf was directly taking on the president’s wife and brother, Maher.

“He repeatedly tells Bashar not to let ‘others’ squander the money as they’re for the poor,” said Tlass. “By others he meant Asma and Maher. Rami’s words managed to cause a rift within Assad supporters. They still all support the regime but some are supporting Rami questioning why the president is doing this to his cousin. This is unprecedented.”

Makhlouf’s bold statements and Tlass’s candour have led supporters and foes of the regime to suggest that Russia, a prominent stakeholder in Syria and nominally a supporter of Assad, is sponsoring the discord. In the weeks before Makhlouf appeared, Russian officials spoke of their disappointment with the Syrian leader, with two former diplomats suggesting he had made few moves towards a political solution – a prerequisite to the cash cow of reconstruction, which Moscow has long awaited. The diplomats also lamented the performance of the Syrian army on the battlefield, claiming Assad had largely been saved from defeat by 25 Russian jets.

“Assad has managed to create an army of Assadists,” said Tlass. “They’re not only Alawites, they’re from every sect. It is a very scary fact.”

Across Syria, divining truths from the extraordinary drama has become a pastime during the holy month, in which observant Muslims fast during daylight hours and often feast at night. Makhlouf’s whereabouts have been central to guessing games. Members of his family suggest he is taking refuge on the coastline near his ancestral village of Bustan al-Basha. Suggestions earlier in the week that Assad had arrested his cousin were unfounded.

“Even so, he has put his wife – a trained investment banker – up against him,” said one member of the Alawite clan, living in exile outside Syria. “Whoever backs down now loses. It’s a big thing for Bashar to do and an even bigger turning for Rami. Bashar wants the keys to the treasury. But he has to take on the Makhloufs and Putin to get them.”

To many, the real-life House of Assad is proving just as remarkable as the imaginary version speculated about in secret over decades. “There are shakedowns, mistresses, assassinations, and palace intrigue,” said Fadi Nourallah, an industrialist from Aleppo living in southern Turkey. “Everything we thought might be true is true, and more.”

Some, including Tlass, see the current machinations as a potential precursor for a changing of the guard, something that Russia has remained determined to avoid through the war – particularly since it formally joined the fray in September 2015.

“Those who say there is no alternative to Assad obviously just want him to remain in power,” said Tlass. “Russia is the one in power here, it can create a group of five army generals to oversee an election for a transitory government whenever it wants.”

Even so, risking yet more instability that would likely follow from a change of power is something Russia seems unwilling to do. In the meantime, the three-way game of brinkmanship between Assad, Makhlouf and maybe Russia is nearing new ground.

“The Assad-Makhlouf families do not care about rebuilding Syria. They want to wear everyone out and remain in power,” said Tlass. “There is no political life in Syria; there is only command and obey.”