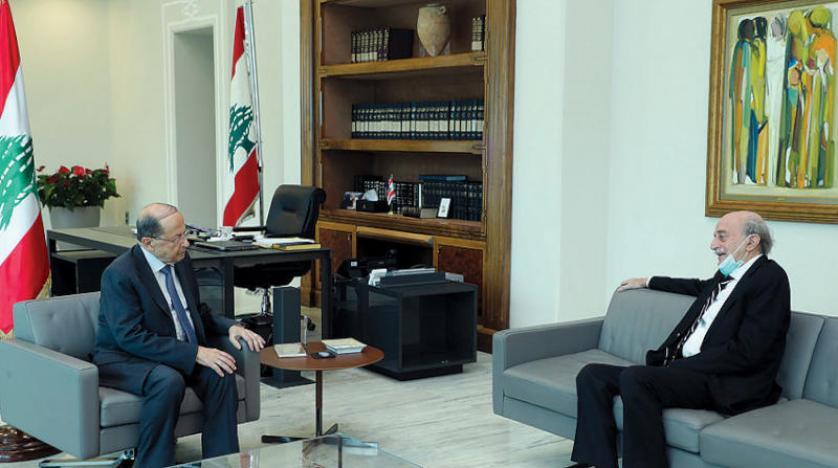 The head of the Progressive Socialist Party (PSP), former MP Walid Jumblatt, made a surprise visit to the Baabda Palace on Monday to meet with President Michel Aoun, for the first time in nearly a year, despite the deep disagreement between them, and the direct attack by Jumblatt and his team against the Free Patriotic Movement (FPM).

Sources close to the matter told Asharq Al-Awsat that the main reason behind the meeting was to ease tension in Mount Lebanon and prevent a lurking clash.

According to the sources, MP Farid Boustani, a member of Aoun’s parliamentary bloc, sought to mediate between the two sides, “in order to prevent a further political escalation” between Christians and Druze in the region.

The same sources noted that the meeting touched on the upcoming meeting in Baabda, which would gather the heads of political blocs to discuss the economic rescue plan recently adopted by the government.

Jumblatt apologized for not being able to attend the gathering for health reasons, but said he would present his written comments to the president, according to the sources.

In remarks following the meeting, the PSP leader said he agreed with the president on the need to tackle controversial issues with “rationality.”

“I visited President Aoun in a goodwill initiative, in order to clear the dispute with the (Free Patriotic Movement),” he noted.

Jumblatt stressed that he was not part of any bilateral or tripartite alliances, saying: “My own calculations are based on the necessity to shape the relationship and manage the dispute with the FPM.”

Jumblatt’s meeting with Aoun comes 5 days after he attacked the Syrian regime accusing it of driving a wedge between the people of Daraa and the Druze of Jabal Al-Arab in Syria’s Al-Suwayda governorate.

“To friends in Jabal Al-Arab, I appeal to you and warn you against the regime of hatred and discord that masterminds the dispute with the people of Daraa, and is supported in this by Israeli intelligence agents,” the Druze leader tweeted.

“Do not get dragged into the game of nations, dismiss rumours, and make peace with Houran no matter what the sacrifices may be. Your destiny and your history of struggle are above everything,” he added.

According to reports from Mount Lebanon 2 MPS representing FPM have been inciting tensions in mount Lebanon between the Druze and the Christians . One of the MPs was identified as Ziad Asswad from the Jezzine district and the other is from the Chouf district . This is why MP Boustani, a member of Aoun’s FPM bloc sought to mediate between Aoun and Jumblatt , before the matter gets out of control