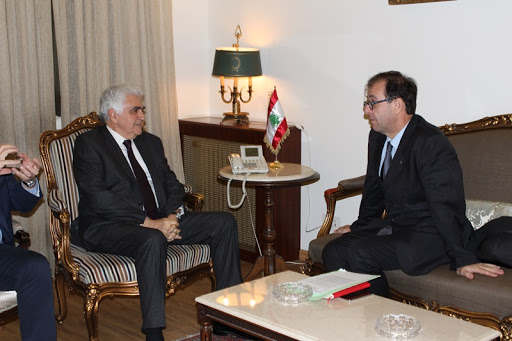 Germany also classified the Iranian-backed movement as terrorist, a step which Hezbollah’s foe Israel has long urged along with the United States.

Foreign Minister Nassif Hitti affirmed that “Hezbollah is a main political component in Lebanon which represents a wide section of the people and part of parliament,” his office said on Tuesday.

Hitti called in Germany’s ambassador Georg Birgelen  after the leader of Hezbollah, a military and political movement that is a major backer of the government, accused Germany on Monday of bowing to U.S. pressure.

Hassan Nasrallah denounced police raids on mosque groups in Germany suspected of being close to the heavily armed Hezbollah, which he said had no official presence in Europe.

Nasrallah also said Lebanon’s government was responsible for protecting its citizens in Germany.

The EU classifies Hezbollah’s military wing as a terrorist group, but not its political wing. Britain introduced legislation in February of last year, before it left the EU, that designated Hezbollah as a terrorist organisation.