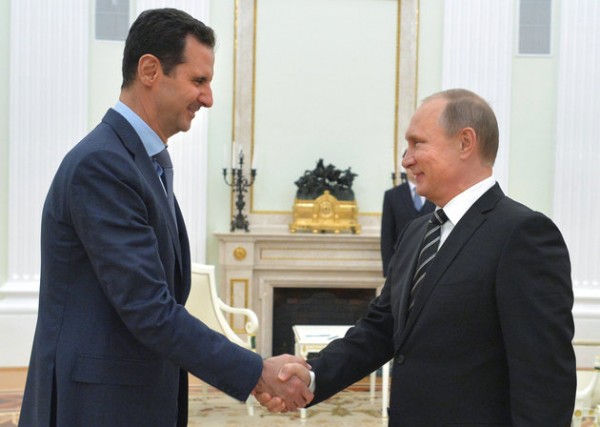 In this photo taken on Tuesday, Oct. 20, 2015, Russian President Vladimir Putin, right, shakes hand with Syrian President Bashar Assad in the Kremlin in Moscow, Russia. President Bashar Assad was in Moscow, in his first known trip abroad since the war broke out in Syria in 2011, to meet his strongest ally Russian leader Putin. The two leaders stressed that the military operations in Syria – in which Moscow is the latest and most powerful addition – must lead to a political process. (Alexei Druzhinin, RIA-Novosti, Kremlin Pool Photo via AP)
Share:

Russia has continued to mount its criticism of the Syrian regime, with a former ambassador releasing a scathing critique of Damascus. Last week, Moscow published a survey that showed a sharp dip in regime leader Bashar Assad’s popularity and exposed doubts over his ability to reform and rebuild Syria.

In the same vein, former Russian ambassador Aleksandr Aksenenok said: “Damascus is not particularly interested in displaying a far-sighted and flexible approach continuing to look to a military solution with the support of its allies and unconditional financial and economic aid like during the old days of the Soviet-US confrontation in the Middle East.”

Throughout the war “it is often difficult to differentiate between the anti-terrorist struggle and violence on the part of the government toward its opponents in that country,” he stated in the article, which was published on the Russian Affairs Council website.

“Thus, tensions have again escalated in the southwestern regions of Syria (the provinces of Daraa and Quneitra), which have been freed under the agreements with a part of the armed opposition on actually the semi-autonomous local power sharing. ‘Mysterious’ murders, threats and abductions have become more frequent against the backdrop of outrages by Syrian secret services,” he International wrote.

Aksenenok referred to the regime’s touting of imminent “victory” and threat to continue the fighting to regain control of all Syrian territories. The former envoy dismissed such rhetoric as divorced from reality. “Despite the tactical successes, achieved mostly with the support of the Russian Aerospace Forces, the military campaign in Idlib has illustrated the limits of what’s possible. During the war years, the Syrian army sustained big losses in troops and equipment. The strength of the combat capable elite troops, being restored with Russia’s assistance, has also declined. High level statements on the use of force if Turkish and US troops do not leave Syria appear divorced from reality.”

The regime’s drive to quickly establish sovereignty over the country’s entire territory less than fully commensurate with the military and economic resources of Damascus and its allies and the real situation on the ground, continued Aksenenok.

“Syria has sustained the biggest losses of all the conflicts in the Middle East. From 2011 through 2018, GDP fell by almost two thirds from $55 billion to $22 billion a year. This means that recovery costs (that amount to at least $250 billion) are equal to 12 times the current GDP. According to the World Bank, about 45 percent of housing has been destroyed, including a quarter of it that was razed to the ground. Over half of health facilities and about 40 percent of schools and universities are out of operation,” he noted.

“Since the war, the living standards of 80 percent of the Syrians have dropped below the poverty line, and their life span has decreased by 20 years. Syria is short of doctors and nurses, teachers, technicians and qualified government officials,” he added.

“The economic challenges now faced by Syria are even more serious than during the active phase of hostilities. It is in the economy that a web of old and new problems has emerged, and this is not just due to the catastrophic destruction during the war or US and European sanctions, although the humanitarian consequences are very sensitive, especially for the majority of the population.”

“In the course of military de-escalation it is becoming increasingly obvious that the regime is reluctant or unable to develop a system of government that can mitigate corruption and crime and go from a military economy to normal trade and economic relations. According to prominent Syrian economists, the central government in Damascus is failing to restore control over economic life in the more remote provinces.”

“Local ‘law’ continues to prevail even in the government-controlled areas, including kickbacks in trade, transit, transport shipments and humanitarian convoys in favor of a chain consisting of privileged army units, security services, commercial mediators and related loyal big-time entrepreneurs, both those that are traditionally close to the president’s family and those that have become rich during the war,” said the ambassador.

“The war produced centers of influence and shadow organizations that are not interested in a transition to peaceful development although Syrian society, including business people and some government officials, have developed requirements for political reform,” he added.

“The situation in Syria, which is being aggravated by non-military, albeit no less dangerous, challenges, is compelling the Syrian government to properly assess the current risks and draft a long-term strategy with consideration for the fact that the main components of a conflict settlement are closely linked. A new military reality cannot be sustainable without economic reconstruction and the development of a political system that will rest on a truly inclusive approach and international consent. This is particularly important because the next presidential election in 2021 is not far off,” he concluded.

Assad used the opportunity to criticize Washington, saying its refusal to lift sanctions against Syria and Iran during the pandemic was “inhumane”. He added that the outbreak has also demonstrated the West’s moral failure.