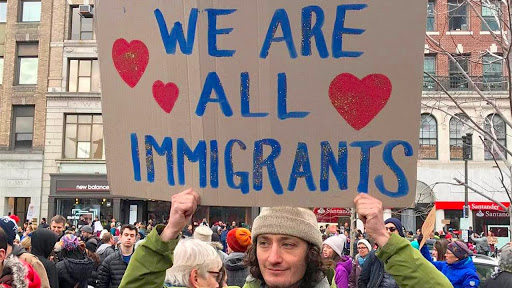 In a late night tweet, President Donald Trump declared he would “be signing an Executive Order to temporarily suspend immigration into the United States.”

In light of the attack from the Invisible Enemy, as well as the need to protect the jobs of our GREAT American Citizens, I will be signing an Executive Order to temporarily suspend immigration into the United States!

It came as a surprise, even to many Trump allies, and the sweeping language in the tweet raised questions about who it would impact. But without the order or any formal guidance from the administration, that remains unclear.

Trump said Tuesday afternoon that his order would be a 60-day “pause” in applications for lawful permanent residency — or green cards — which is a mandatory stepping stone to citizenship. He said the new order “will not apply to those entering on a temporary basis.”

Any such order could be a far-reaching change to immigration policy — or it could simply formalize what is already a de facto pause on immigration during the coronavirus pandemic. It could ultimately be brief, or it could last for some time. Trump said he would re-evaluate the policy based on economic conditions after the two months are up.

Here are some of the biggest questions — and the answers we have so far.

Effectively, yes. United States Citizenship and Immigration Services field offices in the country are closed — appointments and naturalization ceremonies are on hold. Around the world, routine visa processing for tourists and workers has been suspended. Restrictions are in place for non-essential travel. Refugee admissions have been halted and the administration is cracking down at the border by turning migrants away.

It’s not clear whether Trump’s executive order would expand the restrictions or largely formalize them for a certain period.

Could this affect immigrants already in the U.S.?

The president’s remarks suggested that people applying for green cards, whether from inside or outside the country, would be affected. But the move would not have an effect on existing visas.

A key category of people affected are Americans sponsoring relatives for green cards — a widely used category that Trump and his chief immigration adviser, Stephen Miller, have sought to curtail.

“If you’re sponsoring a relative abroad, then this should be an issue,” Siskind said.

Popular visa categories that could be barred from pursuing green cards during the ban include “H” visas (specialty, temporary or seasonal workers), “L” visas (intra-company transfers to U.S.) and “O” visas for people with “extraordinary ability.”

It’s unclear what impact this would have on young people who need to renew DACA protections.

Who could get exceptions?

We don’t know yet.

One administration official said the executive order isn’t expected to make substantial changes to U.S. policy and will likely include exemptions for migrant farm workers. Republican senators have pleaded for flexibility on H-2A visas, which farmers rely on, during the coronavirus crisis.

There is also uncertainty about whether medical professionals would be exempt.

Is this about politics?

Trump has repeatedly leaned into the issue of immigration to fire up his base. Building a wall and barring entry for Muslims were central 2016 campaign planks. It is a powerful issue for the older, white and evangelical voters at the heart of his coalition. On Tuesday, Trump’s re-election campaign sent an email to supporters touting the tweet and saying their “input is crucial to the President’s next steps.”

But overall, the U.S. isn’t sold on Trump’s immigration vision. Polls show Americans oppose the wall and are split on the travel ban from majority-Muslim nations. A recent YouGov survey found the U.S. evenly divided with 46 percent approving of the president’s handling of immigration and 46 percent disapproving.

What are Democrats saying?

Democrats have been critical of the move, accusing Trump of seeking to distract from his failures in dealing with the coronavirus by scapegoating immigrants. “Xenophobe. In. Chief,” tweeted House Democratic Caucus Chairman Hakeem Jeffries, N.Y. And Rep. Joaquin Castro, D-Texas, who chairs the Congressional Hispanic Caucus, called it “an authoritarian-like move to take advantage of a crisis and advance his anti-immigrant agenda.”

Could this impact the battle against COVID-19?

That depends on the details of the order, but it’s possible.

The U.S. is reliant on immigrant labor for its food supply chain and to care for its elderly and disabled population. More than one-fourth of doctors in the U.S. are foreign-born, according to a study of Census data.

In addition, about 4,000 doctors are expected to begin residency programs in the U.S. starting on July 1, Siskind said. White House officials didn’t comment when asked if they would be exempt.When would the executive order be signed?

A senior administration official told NBC News that it could be signed as early as this week but did not offer any details about whether it had been drafted or where the process stands.

The move “had been under consideration for a while,” the official said. When asked how the implementation would work and how many countries would be impacted, the official said: “The details will be forthcoming.”How long will this last?

Trump said the order would last for 60 days before he revisited it. He cited “the Invisible enemy” — his nickname for the novel coronavirus — and “the need to protect the jobs.” Robert O’Brien, Trump’s national security adviser, said it would be “temporary,” but demurred when asked to get more specific.

“We’ll have to wait and see,” O’Brien told NBC News. “Look we don’t know what the time horizon is for the fight against the virus.”Where does Trump get the authority to do this?

Section 212(f) of the 1952 Immigration and Nationality Act gives the president broad authority to block the “entry” of categories of people he deems “detrimental” to U.S. interests.

It was previously cited to ban narrow types of individuals, like human rights violators and Sudanese armed forces members in the 1990s. Trump has expanded its use.

And there might be other similarities. Trump’s travel ban began as a sweeping call for a “total and complete shutdown of Muslims entering the United States,” but eventually narrowed the restrictions to several majority-Muslim nations, with national security as the justification, so it could withstand legal scrutiny. Like the Muslim ban, his forthcoming order could also face lawsuits.