No more dollars. Lebanon banks to give LBP at “market rate” . Peg ends 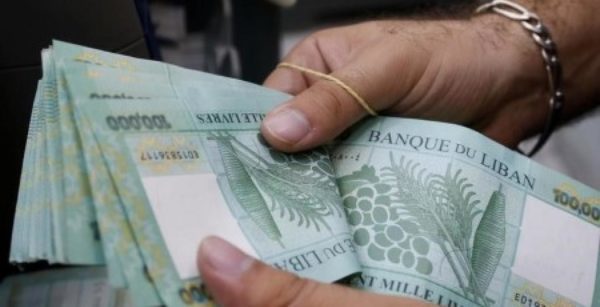 BEIRUT, April 21 – Depositors seeking to withdraw funds from dollar accounts in Lebanon must now be paid out in local currency at a stipulated “market rate” within the withdrawal limits at each bank, the central bank said on Tuesday. ​ The move widens the scope of banking operations based on an exchange rate that the banks announce rather than the official currency peg that has been in place since 1997.

Two banking sources said it did not apply to freshly deposited funds, which could still be withdrawn in U.S. dollars.

The central bank circular said the new decision would be effective for six months. It said depositors who wished to do so could take out dollars in Lebanese pounds, within the limits that each bank sets.

Before Lebanon went into coronavirus lockdown in March, banks had cut withdrawal limits to as little as $100 a week. Since then, they have stopped issuing dollars to depositors altogether.

Domestic banks started imposing controls around six months ago as Lebanon plunged into a financial crisis that has halved the value of its currency.

Tuesday’s move will apply to customers who do not benefit from a decision earlier this month allowing deposits of $3,000 or less to be cashed out – in Lebanese pounds – at the stipulated “market rate”.

Lebanese banks have so far announced they will pay out 2,600 pounds per dollar for those transactions.

Last week, a central bank circular also instructed money wire offices to pay customers in Lebanese pounds rather than dollars, but also at the “market rate”.

In the meantime, on an informal market that has become the main source of cash for most people during the crisis, the Lebanese pound last week slipped to 3,000 to the dollar for the first time.

The official peg of 1,507.5 pounds to the dollar remains in place for bank transactions and critical imports of wheat, fuel and medicine.