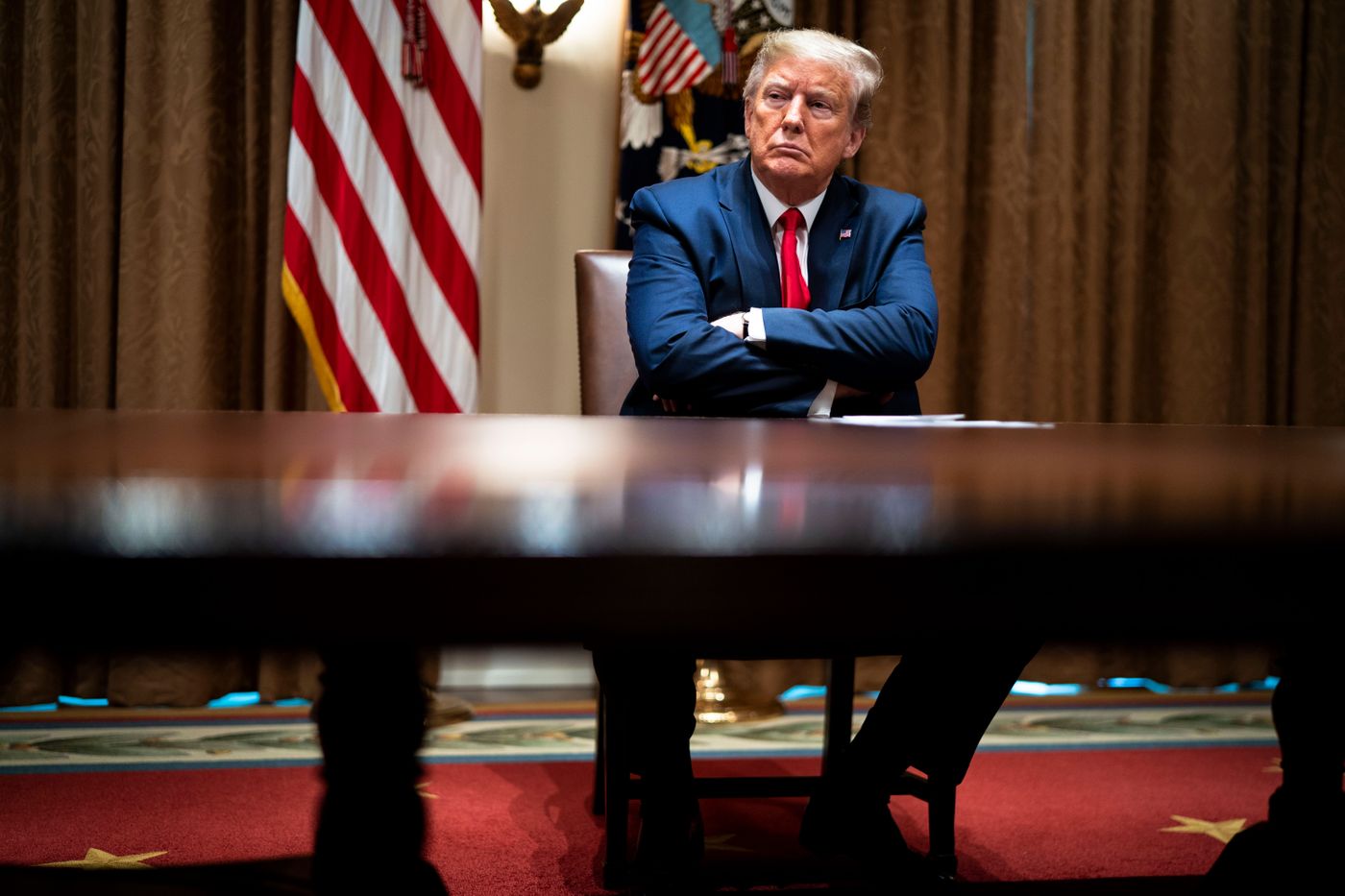 When Congress enacted an emergency plan to send $1,200 checks to every American adult, Republicans joked that President Trump would want to sign his name on the checks. A few weeks later, after the Wall Street Journalreported that Trump was exploring this outlandish desire, a reporter asked, “Is that right? Do you want to sign those checks?” Trump denied it: “No. Me sign? No.”

Last night, the Washington Post reported that Trump’s name will be displayed on every check. A measure passed by both parties to alleviate an economic emergency has been expropriated by his reelection campaign. Trump’s presidency has largely consisted of outrageously corrupt notions proceeding from fearful accusation to accepted reality. Within a few days, this one will also probably be forgotten.

Trump has never respected any meaningful distinction between the federal government and the Trump Organization. He expects every federal employee, especially its law-enforcement agents, to advance his personal political agenda. He has functionally mixed its budget with his own by having the government pour money into his properties, and he has treated its official powers as if they are his own personal chits. The authority he has gained through the emergency response to the coronavirus has vastly expanded the potential for corruption, and every sign indicates that Trump is already engaging in systemic abuse.

Some of the corruption is lingering just below the surface. Trump is speaking constantly with corporate leaders, who can position themselves at the front of the line for federal contracts or relief payments. He supports bailouts for industries with a shaky claim to the public purse, like cruise lines, and has staunchly opposed any rescue for the United States Postal Service, which handles essential government communication. Trump of course has been trying to force the post office to raise rates on Amazon, in retaliation for Jeff Bezos’s ownership of the Washington Post. The economic crisis has put the post office on life support, giving Trump the leverage he wants to make it punish a detested rival.

Trump has treated the distribution of the federal government’s supply of emergency medical equipment like he is walking around the neighborhood with a money clip, pulling out bills and patting grateful recipients on the cheek. When New York governor Andrew Cuomo noted that he retains power to reopen public spaces, Trump exploded, “I got it all done for him, and everyone else, and now he seems to want Independence! That won’t happen!” Trump routinely threatens Democratic governors not to complain about his mismanagement if they want help from Washington, conflating the authority of the government with his own authority (“When they disrespect me, they are disrespecting our government”). He has used the precious supply of ventilators as in-kind contributions, allowing endangered Republican allies like Martha McSally and Cory Gardner to hold them up as proof of their clout.

When Congress handed Trump control of half a trillion dollars in spending authority, it insisted on establishing some loose oversight requirements. Trump has diligently trashed them. When he signed the economic rescue bill, he added a statement that he would refuse to follow its express requirement that the inspector general report if the administration is withholding information from Congress. He quickly fired the inspector general who was tasked with overseeing the bailout fund, and replaced him with a member of his impeachment defense team. There is little mystery about Trump’s intention. He blurted it out: “I’ll be the oversight.”

While it is a coincidence that the pandemic broke out as impeachment was winding down, it is not a coincidence that Trump is revisiting the pattern of abuse for which he was impeached. Trump believed he had a perfect right to take spending passed into law by Congress (in that case, military aid for Ukraine) and dangle it for a political benefit. He has correctly interpreted the near-unanimous acquittal vote by Republicans as a green light to repeat the crime.

Congressional Republicans are communicating their open willingness to help Trump cover up his corruption. They have not raised a peep about Trump’s subversion of oversight, let alone demanded any measures to hold him accountable. After Democrats announced a House committee to ensure stimulus funding is spent fairly, House Republican leader Tom Cole said it would have “unanimous or near-unanimous opposition” and thus “no legitimacy whatsoever.”

Cole explained his rationale in a comically credulous story for the right-wing Washington Free Beacon. Congress doesn’t need to oversee the bill’s funding because it would be “redundant.” “Democrats previously lauded the bill’s oversight requirements,” the story explains, quoting a Democratic member praising its oversight panel. “Within the legislation itself,” Cole says, “there’s a five-person committee that’s appointed by leadership in both houses of Congress, as well as an inspector general function, that will have oversight over this.” The fact that Trump publicly announced his defiance of the law’s requirements, and then fired its lead official, is not mentioned anywhere in the story.

There are a handful of categories of behavior by President Trump that have drawn condemnation or even forceful pushback by at least some Republicans: Trump’s communication style, trade policy, and accommodation of Russia. Trump’s corruption of government and open intent to turn government power into a tool of regime control is not in that category. Republicans have calculated, perhaps correctly, that it is in their interest for Trump to use emergency funds as campaign spending. He is not letting the crisis go to waste.