Trump on why he re-tweeted ‘#FireFauci’: ‘I don’t know’ 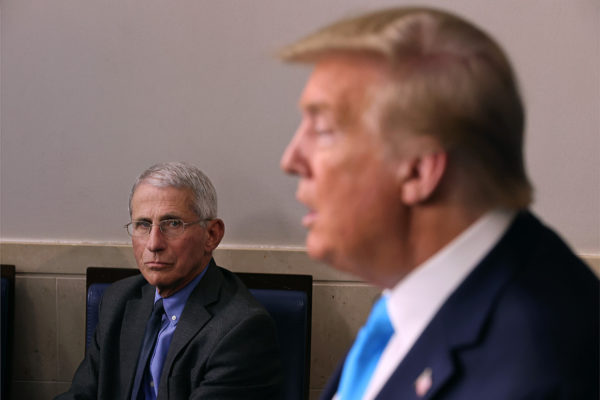 President Donald Trump was asked about his weekend re-tweet of a post that included the hashtag “#FireFauci” during the press briefing Monday, to which he replied “I don’t know.”

Multiple reporters then asked why he re-tweeted the post that said #FireFauci on Sunday.

“I re-tweeted somebody, I don’t know. They said fire. It doesn’t matter,” Trump replied.

“Did you notice that when you re-tweeted it?” a reporter asked.

“Yeah, I notice everything,” Trump said.

“That’s somebody’s opinion. All that is is an opinion … I said I’m not firing him,” Trump said in crosstalk.

Trump continued to talk, until another reporter asked about him and Dr. Fauci being “on the same page.”

“Yeah, we have been from the beginning. I don’t know what it is exactly. But, if I put somebody’s opinion up–I don’t mind controversy. I think controversy’s a good thing, not a bad thing. But I want it to be honest controversy,” Trump said. “Now, when I got a call, I got a call–not very quickly and nobody you know saw that as being any big deal–they said, ‘How are you doing with Dr. Fauci?’ I said I’m doing great. And I didn’t talk to Dr. Fauci, even until we just got here. Dr. Fauci asked one of the people if he could get up and speak. And he did. And they totally misinterpreted him. I saw what they did.”