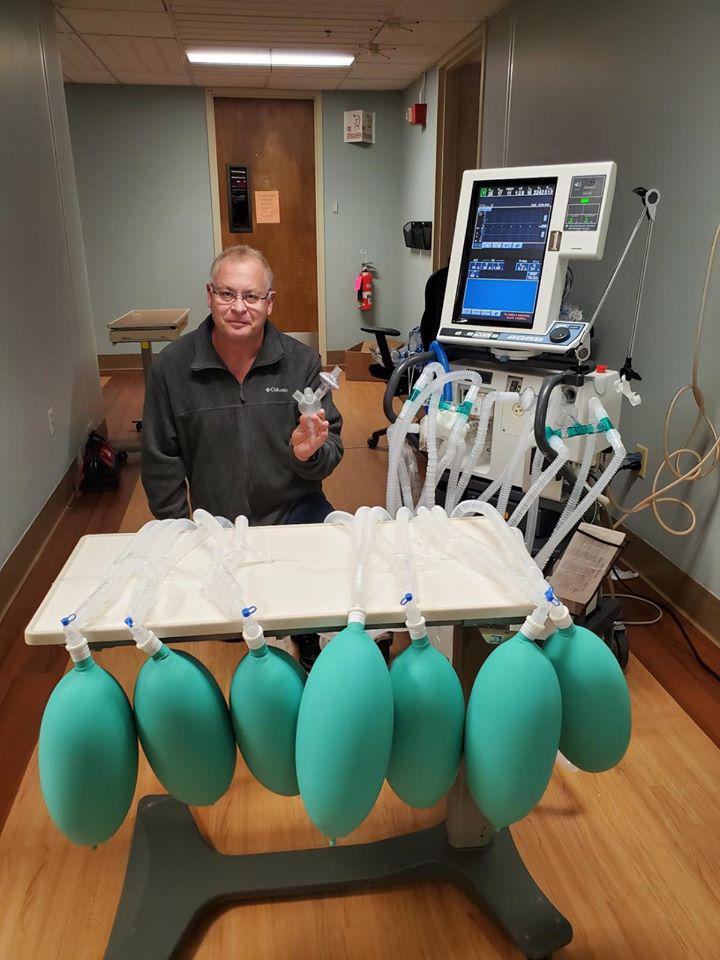 Robert Conley is shown with the ventilator that’s converted for use by up to 8 patients
Share:

Sometimes trying to save the world can happen in a “blur.“
Robert Conley designed an adapter that increases the amount of COVID-19 patients that can breathe from a single ventilator. Earlier this month , Conley continued his daily ritual of sifting through thousands of emails from around the world, many of which brought him to tears.
“It’s heartbreaking,” said Conley. “I’m getting emails from doctors who have just one ventilator and have to choose who lives or who dies.“
The Lebanon engineer, who is an adjunct professor of Mechanical Engineering at Three Rivers Community College, has emerged as one of many heroes who is battling the coronavirus from the front lines.

“It was a group effort,” Conley said. “Not one of us could have done it without the other.“
Conley was referring to Dr. Saud Anwar, a pulmonary disease specialist; Kevin Dyer, whose Deep River company is a leader in 3-D printing; and Marvin Brisoce, a respiratory therapist at Manchester Memorial Hospital.
Like many clinicians during this pandemic, Dr. Anwar, who is also a democratic state senator from District 3 ( East Hartford, South Windsor and East Windsor), sees COVID-19 spreading at an alarming rate and was concerned about a lack of ventilators.

“One ventilator is meant for one person and one patient … that’s a pretty straightforward thing that everyone knows and we work with that mindset,” Anwar said. “Having said that, the reality is changing a little bit. My fear is that we don’t have enough ventilators and in those circumstances when we don’t have enough ventilators we have two options…let people pass away without getting the support that they need or try to fight the best that you can to be able to save as many people as you can. That is the principle that I work with.“
Dyer contacted Conley, 56, a mechanical design engineer who owns his own company, Interactive Cad Solutions, to see if he could help design the Ventilator Quad Splitter. “My first designs had all the fittings too close together,” Conley said. “After meeting with Saud I went back and redesigned it and I sent it to Kevin and he printed out a model for Saturday morning.“
Dr. Anwar conducted the simulation with balloons and posted a video of their successful findings on Facebook.
“My initial concept for the fitting was for four patients and it actually worked so well that we added some T crossings and hosings and got it up to seven patients,” Conley said.
Conley pointed out that the Ventilator Quad Splitter is only for a time of crisis or war.
“It’s a concept that works,” Briscoe said on the Facebook video. “If it comes down to mass casualties this is a concept that I believe can be tried in the field, if need be to have a clinical trial.“
Conley made the design open source so any hospital in the world can download it with a 3-D printer. It is currently being downloaded in the Philippines, Africa, Libya, Pakistan, and Italy.
“I’m donating 100 percent of my time and there is no profit in this,” Conley said. “The way I figure is, I’m diabetic and the two doctors that came up with insulin felt it was such an important discovery that they shared it with the world for free. This is my way of paying it forward.“
One of the emails Conley received read:
Bob
Thank you for designing a life saving gadget to help ventilate more people . In Zimbabwe we lost a young person due to lack of ventilators. We have one ventilator at our private Hospitals so we want to be able to help many people.
Please may you help us save lives in Zimbabwe. Kindly help us to get your gadget so that we can help people.
I am a medical Doctor currently based in United Kingdom but I am from Zimbabwe and I am leading a group called Zimthrive to help Zimbabwe fight the Coronavirus pandemic.
Thank you for your time
Dr Brighton Chireka

”This is way bigger than me,” Conley said. “I’m just a small town kid. It was all a blur. I did this just to help out and I expected no recognition whatsoever and somehow I got thrusted into the spotlight.“
Conley grew up in Lebanon Ohio and served in the USS Dallas in the Navy. The world-wide response to his design continues to amaze him.
“I’m getting all of these emails and I’m thinking what if I miss one email and somebody dies because I didn’t respond,” Conley said. “Ironically, the first class I taught, I told my students I was excited about all of the discoveries they would make in their lifetime … and how much they would change the world.”

Editors note: There are 47 towns named “Lebanon” scattered across the United States.