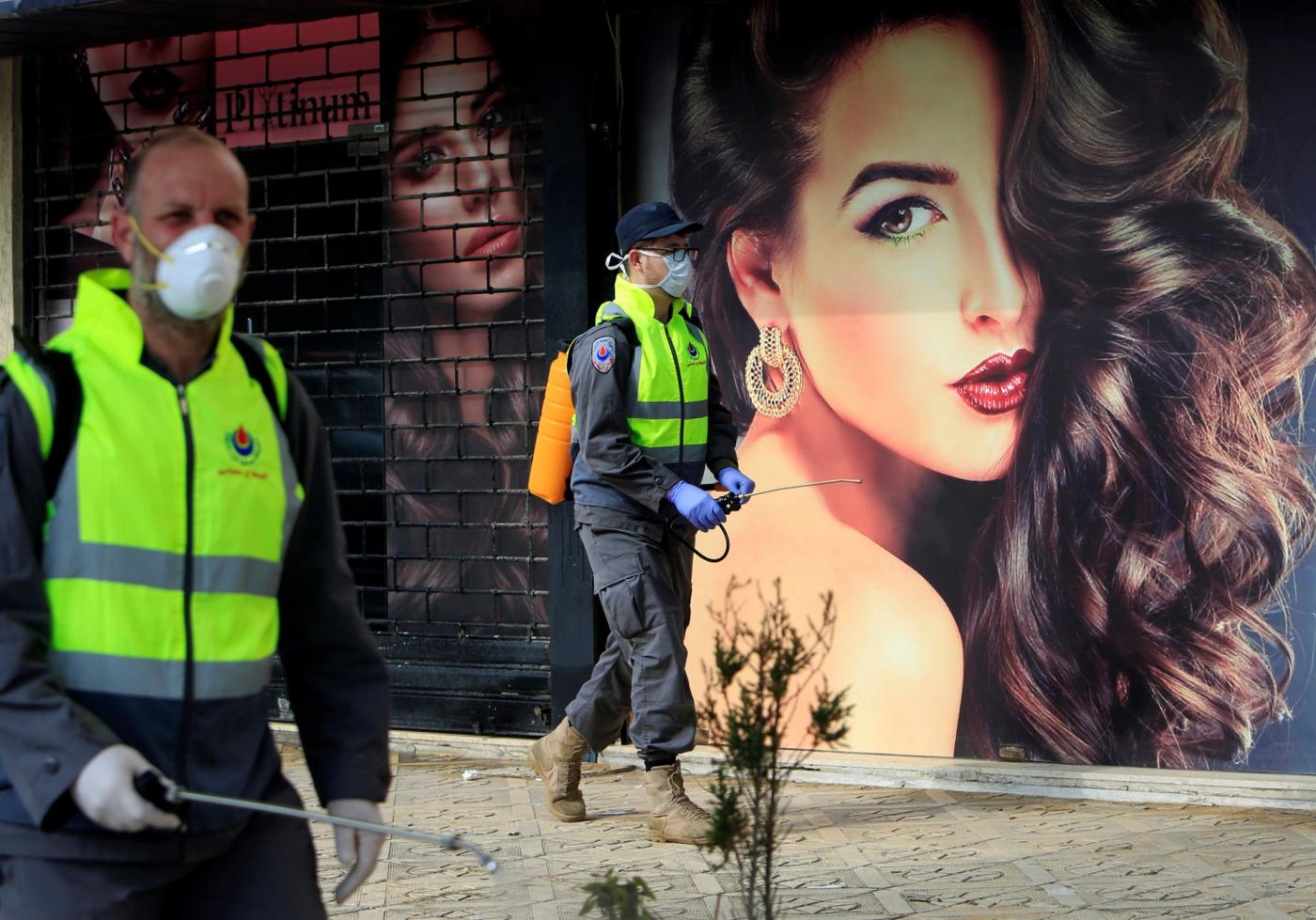 Members of Hezbollah’s Islamic health unit walk past closed shops while disinfecting a street, as a precaution against the spread of coronavirus disease (COVID-19) in Sidon, Lebanon (Reuters)
Share:

While under lockdown in Lebanon’s small mountainous town of Aitat, Firas Talhouk saw a truck and cleaning crew sanitising his street to battle coronavirus. What he didn’t expect to see was the branding of the Druze-led Progressive Socialist Party (PSP) on the truck.

“Many of [my neighbours] greeted PSP members when they passed by,” Talhouk told Middle East Eye. “They put big speakers on cars, calling on residents to stay at home.”

The PSP aren’t alone. Political rivals in the area, such as the Syrian Social Nationalist Party and the Lebanese Democratic Party, have quickly followed suit with their own sanitisation and aid initiatives

Recent months have seen many Lebanese reject their traditional rulers as an economic crisis bites, and are not keen on political parties taking the de facto role of providing what they say ought to be state services.

In cash-strapped Lebanon, the Covid-19 outbreak has put further strains on the economy and the livelihoods of its citizens and residents. The health ministry has confirmed 446 cases thus far, with 11 deaths and a handful of recoveries.

And while the state has struggled to respond to the outbreak and reassure Lebanese, the sectarian-based political parties and ruling elite have stepped in – boosting their standing after months of seeing their reputation take a beating.

“The state that we have in Lebanon is nothing but an archipelago of clientelistic networks,” Bassel Salloukh, professor of political science at the Lebanese American University, told MEE.

Elsewhere in Lebanon, members of rival parties the Lebanese Forces and Free Patriotic Movement (FPM) have roamed municipalities across their constituencies in branded medical coverall suits.

The Lebanese Forces’ party offices in the northern Koura district posted a video of volunteers donning medical coveralls, patrolling in branded trucks, and sanitising streets, homes and churches to a percussive and suspenseful soundtrack.

Similarly the FPM said it has set up a team to sanitise neighbourhoods, provide free testing, and deliver aid and essential goods to quarantined families in need.

Meanwhile, Hezbollah, alongside fellow Shia party Amal, has assembled a team of over 24,000 medical workers. Hezbollah executive council head Hashem Safieddine told the party’s television station Al-Manar that it has allocated some 3.5 billion Lebanese lira for this effort, amounting to around $1.75m at Lebanon’s unofficial street rate.

Sanitisation and aid distribution efforts aside, at least 84 quarantine centres consisting of private hospitals, hotels and other private property have been established or financed by Lebanon’s ruling political parties, according to local television station LBCI.

The parties’ efforts are done in collaboration with the respective municipalities, whose mayor and local council are often members of those parties.

Despite helping make up for the state’s shortfalls, there are concerns about the parties’ moves.

In response to the LBCI report, president of the Order of Nurses, Myrna Abi Doumit, urged the parties to coordinate with the government’s emergency committee to make sure everything is regulation and standard medical practice. Meanwhile, the Order of Physicians has urged municipalities to stop spraying pesticides as a way of sanitising their neighbourhoods.

Though Lebanon’s public sector is bloated with employees, a severe lack of funding means that it only provides barebones social services.

Those who can afford it opt for private healthcare alternatives. But even before the coronavirus crisis, Lebanon was in economic freefall, with Prime Minister Hassan Diab anticipating that soon over 40 percent of Lebanese will live below the poverty line.

As unemployment surges, many may have to fall back on the country’s ruling parties’ patronage networks.

That is a situation the parties will welcome with open arms. Their reputations have taken a beating since Lebanon’s protest movement erupted in October, in which hundreds of thousands of Lebanese have flooded streets and squares demanding an end to corruption and the dismantling of the country’s political class.

Salloukh says Lebanon’s ruling parties will “try to do everything they can… through their own party networks in order to maintain these kinds of clientelistic relations.

“In many ways, the Covid-19 crisis has exposed the shell that is the Lebanese state,” he told MEE.

In south Beirut’s Jnah, government-run Rafik Hariri University Hospital was designated as the key facility for handling the Covid-19 outbreak. Medical workers and other staff have been working around the clock, as they wait for a pay rise they were promised in a public sector wage-hike law passed almost three years ago.

Dr Firass Abiad, who heads the hospital, hasn’t had a moment’s rest between communicating with the general public on his Twitter, running the facility, and issuing statements to the press. “We have done more than other [hospitals],” he told MEE.

Austerity measures have seen Lebanon slash its government spending, and its already weak healthcare sector faces an additional seven percent in budget cuts. In addition, US dollar shortages and the government’s failure to reimburse medical facilities have caused a worrying shortage in life-saving medicines and crucial equipment.

Abiad told MEE that reduced state spending on public hospitals and the shortages are crucial issues.

Over 80 percent of Lebanon’s hospitals are private. While many are starting to add Covid-19 units, they fall short of national demand. The head of the Private Hospitals Syndicate said that not more than 20 beds for coronavirus patients can be allocated per hospital.

Meanwhile, the under-funded Rafik Hariri Hospital has earmarked 140 beds for the infected. Health Minister Hamad Hasan said eight other public hospitals will be prepared to welcome patients, though it is unclear how rapidly that will happen.

Lebanon, despite its famished public health facilities and limited financial resources, has managed to prevent a large-scale outbreak. However, the lack of mass testing means the future remains a bit murky.

Abiad has been outspoken on Twitter about his take on developments, whether it’s the good or bad. He has expressed optimism on how things have been handled, but has also questioned the better-equipped and larger private facilities’ inability to allocate more beds for coronavirus patients.

Either way, he says the situation is unsustainable as it is.

“The biggest obstacle I see now is the absence or low level of coordination between the different actors,” Abiad told MEE, citing Lebanon’s private and public sectors and international partners.

“Should this crisis explode, we will be overwhelmed.”

Making up the shortfall

These concerns are certainly far from hyperbole, Lebanese public health expert Fatima al-Sayah told MEE. According to public information, just 10 percent of the hospital beds needed for the current number of cases is available, and Sayah believes it will take a month to make up the shortfall.

However Sayah said her sources in the healthcare sector say the real number of available beds is a bit lower, so she believes a month may be a generous projection.

That said, Sayah was hopeful but cautious that the containment measures enforced by the Lebanese government would help.

“Nonetheless, enforcement of containment measures is unsustainable without various socio-economic supports,” she admitted, “especially given the current dire economic circumstances in the country.”

Any expectation that the Lebanese government might open its coffers for the significant funding that the healthcare system may need is misplaced.

Diab’s cabinet is desperately trying to tackle Lebanon’s gargantuan debt – among the largest in the world – by slashing the budget and unlocking a pledged $11.1bn in loans from the international community.

It has, however, called on the diaspora to donate to the central bank in Lebanese lira, dollars – both American and Australian – and euros.

Politicians such as former prime ministers Saad Hariri and Najib Mikati, both billionaires, have donated a paltry 100 and 80 million Lebanese lira respectively ($50,000 and $40,000 on the parallel market rate).

Druze leader Walid Jumblatt of the PSP, meanwhile, pledged $600,000 of donations to the Rafik Hariri University Hospital and Lebanese Red Cross on a prime time television show. Association of Banks president Salim Sfeir also delivered $6m to Diab to support the government’s efforts against the pandemic.

Though the ruling elite’s patronage networks, social services and philanthropy to fill the gap left by the state has been embedded in Lebanese political culture for decades, Salloukh sees their latest attempts as a desperate ploy to hold on to their supporters.

“The sectarian political elite is between a rock and a very hard place vis-a-vis their clients,” he said, adding that the economic crisis that sparked mass protests last year has severely undermined their support base.

With anti-coronavirus lockdown measures further restricting income and paralyzing the economy, Salloukh said that the parties are now stepping up to prevent unrest.

Their efforts have so far not been entirely successful.

Over the weekend protests were seen in Tripoli, the Bekaa Valley, south Beirut’s Dahieh, and the north’s Akkar, as Lebanese raged against the shutdown being ordered without state-provided financial compensation to businesses and employees now out of work.

“So now, whether it’s through state resources – which are not much – or other resources [their own], the ruling parties will have to try to address this latest socioeconomic crisis as a result of Covid-19,” Salloukh said.