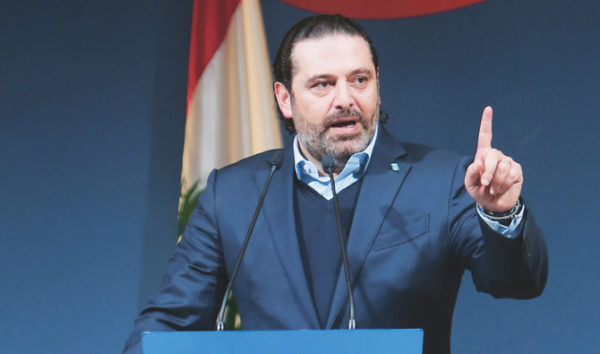 Former prime ministers joined the debate over the financial appointments, which are expected to be presented at Lebanon’s government session this week.

The appointments will include the deputies of the Central Bank governor and the members of the Banking Supervision Authority.

“At a time when Lebanon is going through political, economic, financial and administrative crises, the pandemic of coronavirus comes to deepen and complicate further the situation,” they said.

“The Lebanese can see how their government tends to make appointments with an intention to grasp control of administrative, financial and monetary positions without respecting to the standards of competence and merit,” they added.

Sources close to the former premiers told Asharq Al-Awsat that the statement was “more than a warning bell, and sends a direct message to Prime Minister Hassan Diab, stating that we will not allow the country to be kidnapped by President Michel Aoun and his political movement.”

For his part, Lebanese Forces Leader Samir Geagea issued a statement, saying: “Despite all expectations, the current government is about to make appointments on the same basis that used to be followed previously.”

“Search for the trio,” he stressed, referring to Aoun and the Shiite duo, Hezbollah and Amal, as explained by sources to Asharq Al-Awsat.

There cannot be any solution as long as this trio continued to grab power in Lebanon, Geagea underlined.

Sources told Asharq Al-Awsat that the Shiite duo has informed Aoun and Diab that their bilateral agreement would not be sufficient to pass the appointments.

The duo emphasized, according to the sources, that there would be no appointments without taking into consideration the demands of the leader of Marada Movement, former Minister Sleiman Franjieh.