The untold story of how Iran botched the coronavirus pandemic 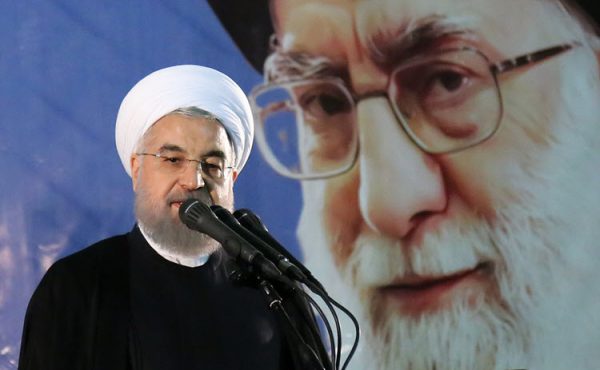 The government learned early on about the outbreak—but, from a combination of cynicism and ideology, decided not to do anything about it.

The official statistics issued by Iran’s health ministry about the coronavirus pandemic, which report 23,049 people infected people and 1,812 deaths across the country as of March 23, are brutal enough. But there’s every reason to believe the real figures are much higher. Last Thursday, Kianush Jahanpur, an Iranian health ministry spokesman, tweeted that 50 people on average contract the virus in Iran almost every hour, and the fatality rate is one person every 10 minutes or six people per hour.

That sobering comment reflected earlier warnings by other Iranian health officials that the real tally of coronavirus infections and deaths is “definitely” higher than the government admits. Rick Brennan, an emergency director for the World Health Organization who recently visited Iran, said on March 17 that the actual overall COVID-19 toll could be five times higher than official statistics.

It’s indisputable that Iran, a country of around 83 million people, is one of the pandemic’s epicenters. Why exactly the crisis acquired such massive proportions in Iran is more complicated to address, but responsibility mainly lies with Tehran’s botched response, details of which are only now starting to come to light. There are growing indications that the Iranian government knew about the outbreak even as it avoided doing anything to stop it—or even inform the public about it. Meanwhile, the government’s judgment continues to be marred by a combination of cynicism and religious ideology.

As the coronavirus got officially underway in China through January with an ever-rising death toll, Iranian officials did nothing to stem travel between the two countries, in a seeming attempt to maintain strong diplomatic ties. In an interview on Feb. 4, Bahram Parsaei, a ranking member of parliament from Shiraz, complained that despite a government decision on Jan. 31 to supposedly suspend all Iran-China flights, some Iranian airlines not only carried on business as usual but also helped transfer China-bound passengers in other countries. He added that even Turkey had “canceled all China flights out of care for people’s lives” notwithstanding its heavy economic reliance on tourism, including Chinese tourists. Yet Mahan Air pressed on with Tehran-Beijing flights until as late as Feb. 23.

On Feb. 19, the Iranian government publicly confirmed two deaths caused by COVID-19 in the religious city of Qom, which has a population of 1.2 million. International public health experts found it curious that Iran’s first official acknowledgment of the outbreak came in the form of a death, rather than any announcement of infection, which necessarily must have preceded. This suggests the virus may have already spread quite widely at the time of the announcement—and that Iranian officials may have known as much.

Giving further credence to that theory is the fact that on Feb. 15, four days before Iran officially reported its first coronavirus cases, Supreme Leader Ali Khamenei had a customary meeting with a group of religious eulogists, but unlike in past years, his security detail did not permit them to approach Khamenei and kiss his hand. “They didn’t let us kiss aga’s hand,” the eulogist Nariman Panahi later clarified, using a local appellation to refer to the supreme leader. “Why? [Does this mean] aga ignored us? No. Protection of aga’s life is obligatory for us.”

Thus while the Iranian government cared for the life of the supreme leader and took extra precautions to protect him from the coronavirus as early as mid-February, it failed to care for the lives of 83 million Iranians and prioritized its partnership with China over the nation’s public health.

The most damning indictment of Iran’s crisis response came on Feb. 24, when Mohammad Hossein Bahreini, the president of Mashhad University of Medical Sciences, in an interview with the state-run Iranian Students’ News Agency admonished that the “presence of 700 Chinese clerical students in the Qom Seminary prepared the ground for dissemination” of the coronavirus all over Iran. The interview was removed shortly after publication and repudiated by state-linked media later. On the same day, Ahmad Amirabadi Farahani, a member of parliament from Qom who sits on the parliamentary presiding board, cited Bahreini as saying that the first deaths caused by COVID-19 in Qom came on Feb. 13, that is, six days before Iran’s official announcement of the coronavirus outbreak in Qom.

Tehran’s struggle to maintain good ties with Beijing despite the imminent coronavirus threat was partly driven by the U.S. maximum pressure campaign, which the Trump administration set in motion in 2018 after scrapping the Iran nuclear deal and reimposing comprehensive sanctions against the Iranian economy, and which has rendered the country critically dependent on Chinese investment and assistance. In addition to purchases of Iranian crude and throwing Iran a lifeline in the face of crushing U.S. sanctions, China is constructing a $2.7 billion high-speed train route and a solar power plant near Qom, among other projects.

Yet Iran’s general neglect of the colossal public health threat posed by the coronavirus also emanates from its fundamental unfamiliarity with the nature of such a peril. After all, the virus isn’t a domestic revolt or foreign intervention aimed at regime change, but a creeping, invisible menace against the whole society that requires a science-centered response. Such strictly empirical approaches to policymaking have been largely neglected by Tehran, except in specific instances such as its nuclear and, more recently, missile programs.

The systematic failure to take the threat seriously manifested itself in the comparably high death toll among influential government figures, including within the Islamic Revolutionary Guards Corps leadership. For one, the corps lost to the coronavirus outbreak Gen. Nasser Shabani, a senior commander with 37 years of experience and such key posts as the deputy head of Tehran’s Sarallah Base, which is in charge of security in the capital. The virus also claimed the life of Mohammad Mirmohammadi, a member of the Expediency Council close to Khamenei. In August 2018, Shabani made headlines in relation to the Yemen war after describing “Lebanon’s Hezbollah” and “Yemen’s Ansar Allah” (Houthis) as “our [strategic] depth” and saying smugly that “we asked Yemenis to hit two Saudi tankers, and they hit.”

Another reason Iran dragged its feet in responding to the coronavirus was that it didn’t want to impede arrangements for parliamentary elections on Feb. 21. The government already had fears of low turnout due to political turmoil in the preceding months—from the brutal suppression of nationwide protests against a state-sanctioned fuel price spike in November 2019 to the fatal shooting down by mistake of a passenger plane with 176 people onboard in January. That prompted a measured silence over the coronavirus spread among Iranian leaders, lest it tank public participation further.

When Iran finally did take concerted action to contain the spread, domestic politics and religious ideology impaired its effectiveness.

On the one hand, the administration of President Hassan Rouhani set up a “national headquarters for fighting the coronavirus” in February following a decision by the Supreme National Security Council and its endorsement by the supreme leader. For all its efforts to limit the outbreak, the headquarters notoriously resisted organized quarantine measures from the very beginning. In a press conference on Feb. 24, Iran’s Deputy Health Minister Iraj Harirchi publicly opposed the sort of wide-scale quarantining China had enforced and stressed that “quarantines belong to [the period] before World War I for [diseases like] plague and cholera, and even the Chinese are not satisfied with the quarantine that has been put in place.” Ironically, Harirchi was making these comments while sweating profusely and coughing repeatedly. He later tested positive for the coronavirus.

On the other hand, Khamenei ordered the Iranian military, led by the Revolutionary Guards, to establish Imam Reza Base as part of state efforts to combat the pandemic. Headed by Gen. Mohammad Bagheri, armed forces chief of staff and one of Iran’s most seasoned strategists, this military contingent proposed a set of preventive measures in its first meeting on March 13: a national monitoring program to identify the infected and those suspected of infection, provision by the military of 1,000 mobile and stationary clinics for screening and examining the cases, and organization of a national campaign to “de-crowd stores, streets, and roads.” These proposal, however, mostly fell on deaf ears among military officers and other officials who shunned the quarantines and shutdowns for fear of their economic fallout.Trending Articles